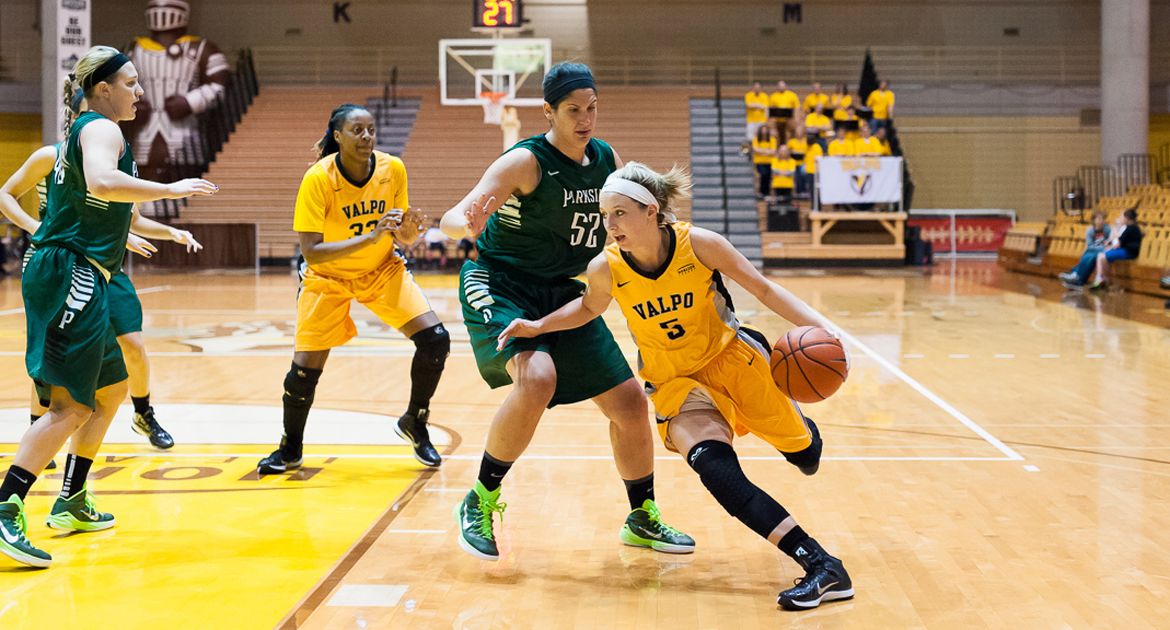 The Valparaiso women’s basketball team opened up the 2014-15 campaign on Saturday afternoon at the ARC, dropping a 69-52 decision to UW-Parkside in exhibition action.

“I thought [UW-Parkside] came in with more depth than us, and that definitely made an impact on how they played today,” said Crusader head coach Tracey Dorow.  “I thought Parkside was a lot more aggressive than we were – they were stronger and tougher, both physically and mentally.  Hopefully we grow a lot from today, take today’s game and learn from it.”

The Crusaders had four players sitting out due to injury on Saturday, including a pair of returning starters in Jessi Wiedemann (Palatine, Ill./Fremd) and Lexi Miller (Caledonia, Mich./Caledonia). Of the nine players who saw court time, five of them were seeing their first action in a Crusader uniform.

Valpo and UW-Parkside traded blows in the early going, with a three-point play by freshman Jasmyn Walker (Muskegon, Mich./Mona Shores) and a layup by senior Jessica Carr (Arcadia, Ind./Hamilton Heights) putting the Crusaders ahead 5-2 just over two minutes in. The Rangers scored nine points over their next three possessions to take a 11-5 lead, but over the next two minutes, baskets from Carr, junior Abby Dean (Carmel, Ind./Carmel) and freshman Dani Franklin (Cedar Rapids, Iowa/George Washington) kept the Crusaders within four points.

Franklin’s basket brought Valpo back to within 15-11 with 14:37 to go in the first half, but the Crusaders would go cold from there, scoring just two points in the next eight-plus minutes.  In that stretch, UW-Parkside went on a 16-2 run to push its lead to 31-13. The Rangers would go up by as much as 25 points in the first half, but eight late points from Franklin, including a pair of 3-pointers, kept UW-Parkside from pushing the lead any higher as the Crusaders went into the locker room trailing 48-25.

After surrendering seven 3-pointers and 48 total points in the first half, Valpo turned up its defense in the second half, allowing the Rangers to hit just one triple and holding them to 5-of-27 shooting in the final 20 minutes while forcing eight turnovers. While the Crusaders held UW-Parkside to just nine points in the first ten minutes of the period, they were unable to take advantage on the offensive end, scoring just eight points of their own over that stretch.

Franklin led the Crusaders in her first game in a Valpo uniform, scoring 13 points in 17 minutes off the bench, including a trio of 3-pointers. Dean chipped in 11 points and seven rebounds, while redshirt sophomore Annemarie Hamlet (McBain, Mich./McBain [Oakland]), also in her first appearance as a Crusader, registered eight points, seven rebounds and five assists.

“I’m not surprised – Dani’s a very good shooter, and that was one of the main reasons we recruited her,” said Dorow on Franklin’s debut.  “She understands how to play from the perimeter right now, and once she learns how to read defenses at this level and learns how to play in the post, she could be a dynamic weapon for us.”

“A lot of it is going to be the team seeing what we need to work on over these next couple weeks,” said Dorow on what the team could take from today’s game.  “It’s not going to hurt having Jessi and Lexi back when we get them back, so today was more about five kids gaining experience that didn't play last year.  To me, that's the biggest thing we got out of this - hopefully we got some kinks out and will take these next two weeks to move a lot further along so we’re ready for the start of the season.”

For Valparaiso, this was its only scheduled exhibition game prior to the start of the 2014-15 regular season.  The regular season will commence on Friday evening, November 14 at the ARC against Butler at 5 p.m.