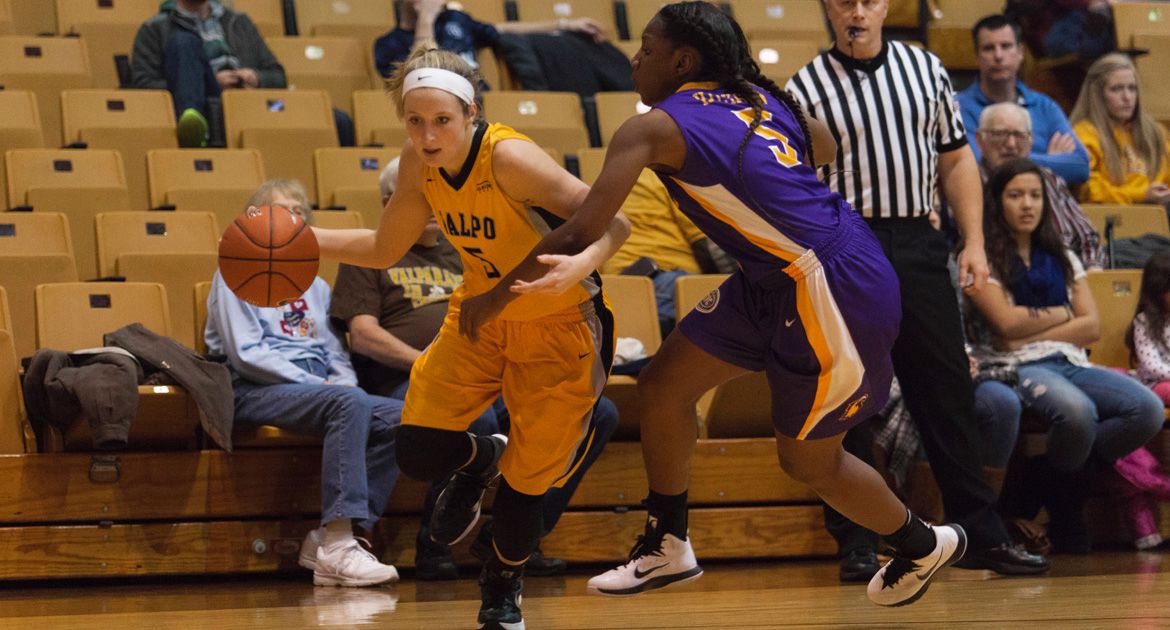 Junior Abby Dean was 5-for-7 from the line as part of a 15-point evening in Valpo's 79-61 win over visiting Tennessee Tech. (Yahya Alqahtani)
Tennessee Tech at Valparaiso | November 22, 2014

The Valparaiso women's basketball team continued its torrid shooting Saturday night at the Athletics-Recreation Center, and it parlayed into a 79-61 victory over Tennessee Tech.

For the second straight game, the Brown and Gold had a guard shoot 4-for-5 from three-point range. Two days after Lexi Miller (Caledonia, Mich./Caledonia) achieved the feat at Northern Illinois, senior Jessica Carr (Arcadia, Ind./Hamilton Heights) took her turn as her 16 points represented a game-high. Carr added six assists as well.

The Golden Eagles (1-2) scored the first points of the game on a Candace Parson layup. Valpo responded immediately with a 15-2 run fueled by a pair of Carr triples, a trey from Annemarie Hamlet (McBain, Mich./McBain [Oakland]), and a trio of layups.

The Crusaders continued their upbeat tempo on offense. Active ball movement created a bevy of open looks and the Brown and Gold took full advantage in a first half that yielded ten three-pointers. Jessi Wiedemann (Palatine, Ill./Fremd) continues to nurse her way back from injury, but the junior joined in on the shooting barrage, nailing three consecutive three-pointers. All nine of her points came in that 90-second span.

The Golden Eagles cut the margin to as few as 13 points with five minutes remaining, but the Crusaders hit their free throws and received their 12th trey as they held on for a 79-61 win. Valparaiso collected the victory despite committing over 20 turnovers for the third consecutive outing.

Junior Abby Dean (Carmel, Ind./Carmel) found success with dribble penetration throughout much of Saturday's tilt. Last season's free-throw champion went 5-of-7 from the line in addition to 5-of-8 shooting from the field. Her 15 points represented her second game this season in double figures.

Tennessee Tech had three players finish in double figures in the losing effort. Parson and Samaria Howard each pitched in 12, while Mariah Dean added 11 points off the bench.

The Crusaders (3-1) return to the road Tuesday when they take on Akron (3-0) at the James A. Rhodes Arena. Reigning champions of the Mid-American Conference, the Zips went 12-2 at home a year ago and are already off to a 3-0 start this season. Tipoff is scheduled for 6:00 pm CT. Links to the audio and live stats will be available at ValpoAthletics.com.