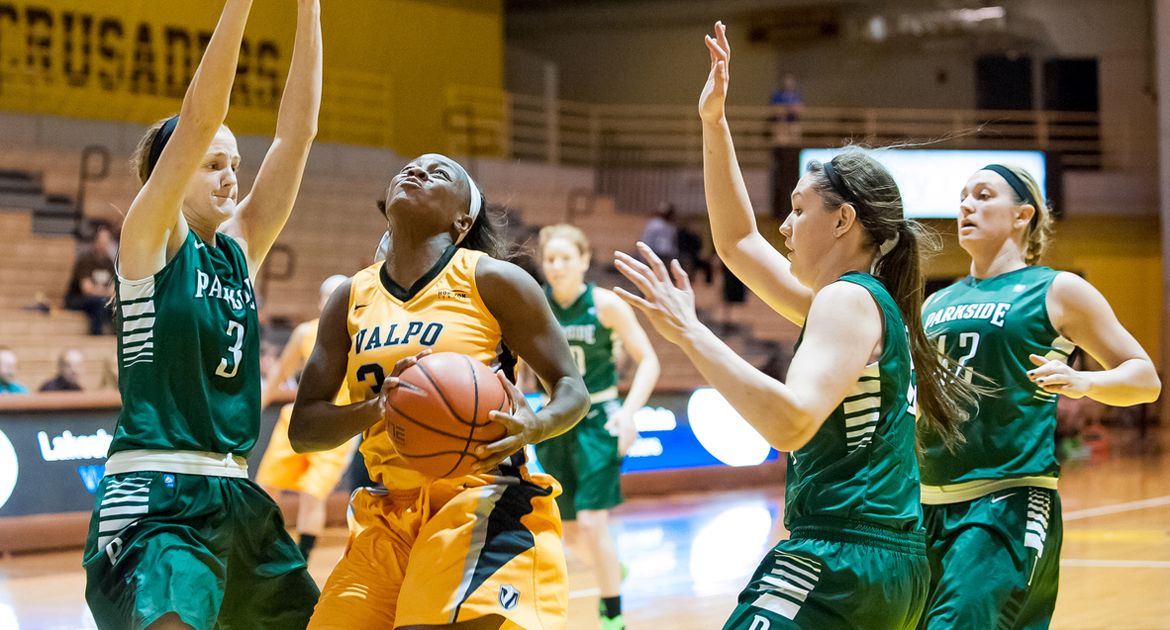 Next Up in Crusader Basketball: Valparaiso faces its second Mid-American Conference (MAC) opponent in the last three games as it wraps up its four-tilt, seven-day stretch Tuesday evening at James A. Rhodes Arena in Akron, Ohio. Tuesday represents the first of five trips to the Buckeye State this season for Valpo.

Last Time Out: Thanks to ten first-half three-pointers, the Crusaders rolled to a 79-61 win over Tennessee Tech Saturday night at the ARC. The Golden Eagles scored the first bucket of the game, but the Brown and Gold responded with a 15-2 run. Jessi Wiedemann’s second of three consecutive treys gave Valpo a 26-14 lead at the 9:13 mark, a double-digit edge it never relinquished. Jessica Carr (16), Abby Dean (15), Dani Franklin (12) all scored in double figures while Jasmyn Walker recorded her second straight game with 10 or more rebounds.

Head Coach Tracey Dorow: Tracey Dorow (20-46) is in her third season at the helm of the Valparaiso women’s basketball program in 2014-15. She collected her 250th career victory on Friday, Nov. 14th after a 91-57 walloping of Butler. In her first season, Dorow led the Crusaders to eleven victories overall, including five in Horizon League play. Dorow arrived in Valparaiso after 14 seasons at Ferris State. She compiled a 232-163 record while with the Bulldogs. Furthermore, Ferris State posted the #1 grade point average in all of Division II for the 1999-2000 women’s basketball season as well as the #2 ranking in 2002-2003.

Series Notes: Valparaiso leads the all-time series 9-4, including a 2-0 mark in postseason play. The Crusaders and Zips spent four seasons together in the North Star Conference. A non-conference tilt in November of 2006 was the first matchup between the two teams in twelve years. Coincidentally, that game in Akron - which Valpo won 50-49 - was also the last meeting.

Storylines...
- Akron owns a +20 turnover margin while Valpo has a -40 margin.
- The Crusaders have opened a season 4-1 just once in school history (1974-75).
- The winner’s score in all five of Valpo’s games this season (including exhibition) has been odd-numbered. The winner’s score in all four of Akron’s games has been even-numbered.
- Akron head coach Jodi Kest is in search of her 350th career win Tuesday night.

@ZipsWBB
- @ZipsWBB finished 2013-14 with a 23-10 overall record, and a 14-4 mark in the Mid-American Conference (MAC).
- @ZipsWBB earned the MAC’s automatic berth into last year’s NCAA Tournament, where it lost to Purdue, 84-55.
- The @ZipsWBB NCAA Tournament appearance last season was the first in school history.
- Depending on the first round result of the Denver Thanksgiving Tournament, @ZipsWBB may not play its first true road game until December 15th (Bethune-Cookman).
- @ZipsWBB has two players averaging over 20 points per game: Anita Brown (23.0 PPG) and Sina King (21.0 PPG).
- @ZipsWBB held two of its first three opponents to fewer than 50 points (Binghamton, Northern Kentucky, 49 each).

Jessica Carr
- Recorded game highs in points (16) and assists (6) to lead Valpo to a 79-61 win versus Tennessee Tech.
- One of two team captains (Wiedemann) this season.
- Drained a career-high six three-pointers in Valpo’s season finale at Green Bay.

Lexi Miller
- Owns the fifth-best turnover ratio in the Horizon League (4.3).
- Finished a point shy of her career-high last Thursday as she guided Valpo with 17 points on 4-of-5 shooting from three-point range.

Jasmyn Walker
- Has started all four games to open her Crusader career.
- Ripped down 14 rebounds to go with nine points at NIU Thursday.

Jessi Wiedemann
- Has appeared in all 65 games since arriving to Valparaiso.
- Knocked down three treys Saturday in the Crusaders' 79-61 win over Tennessee Tech.
- Registered a career-high 21 points vs. Cleveland State on 1/27/14.