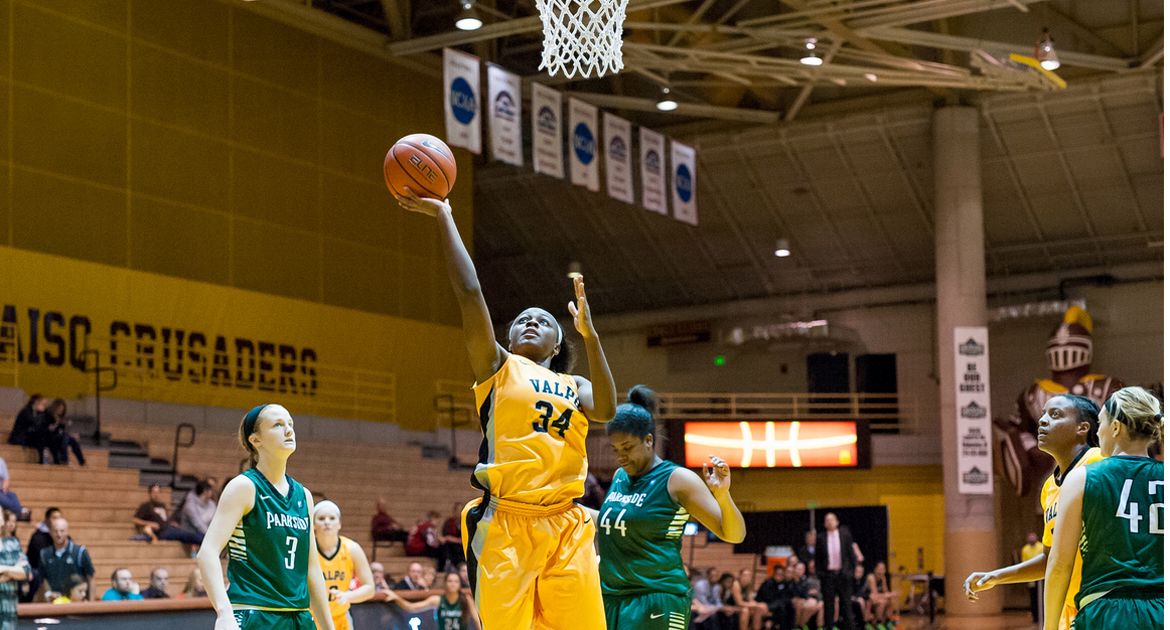 Jessica Carr (Arcadia, Ind./Hamilton Heights) recorded a career-high eight assists, but Tulsa shot raised the nylon on a school-record 15 threes in an 87-63 defeat of the Crusaders Saturday afternoon at the Athletics-Recreation Center. Valpo had four players finish in double figures including Jasmyn Walker (Muskegon, Mich./Mona Shores), who contributed 16 points and nine rebounds.

As was the case much of the afternoon, Tulsa responded as soon as the Crusaders drew within striking distance.

A Kadan Brady trey seven minutes in expanded their lead to nine points. An Abby Dean (Carmel, Ind./Carmel) jumper and a pair of Walker free throws cut the deficit to five, but Antoinet Webster buried her a triple from the corner - her first of three - to push the Tulsa advantage back to eight.

For the remainder of the half, the Brown and Gold would knock down a two-point field goal or two and Tulsa would pop a three.

The Golden Hurricane went into the halftime break with a 41-29 lead. They sunk eight of their 16 attempts from beyond the arc. For Valpo, Walker and Thompson both registered eight points in the opening period.

The second half delivered a similar one-step-forward-two-steps-back feel.

Valpo made it a two-possession game several times over the course of the closing period, but Tulsa had an answer on each occasion.

Six Tulsa players recorded multiple three-pointers as the Golden Hurricane set a school record in triples made with 15 on 31 attempts (48.4%). On the flipside, the Crusaders found the bottom of the net on just four of 20 tries (20%).

Walker set a new season watermark with 16 points to go with nine boards. The freshman was 6-for-8 inside the arc. Thompson was 6-of-11 from the floor as she also bumped up her single-game high output to 14 points. Freshman Dani Franklin (Cedar Rapids, Iowa/George Washington) knocked down a pair of treys en route to a 12-point afternoon. Junior Lexi Miller (Caledonia, Mich./Caledonia) chipped in ten points.

Tulsa (4-4) returns to the Sooner State for a four-game homestand.

Valpo (3-5) heads to South Dakota (6-2) Tuesday for the Crusaders' first-ever trip to Vermillion. Brandon Vickrey and Renee Turpa will have the call on WVUR (95.1 FM, Valparaiso) from inside the DakotaDome. Tip-off is set for 7:00 pm CT. The link to the audio and live stats will be available at ValpoAthletics.com.