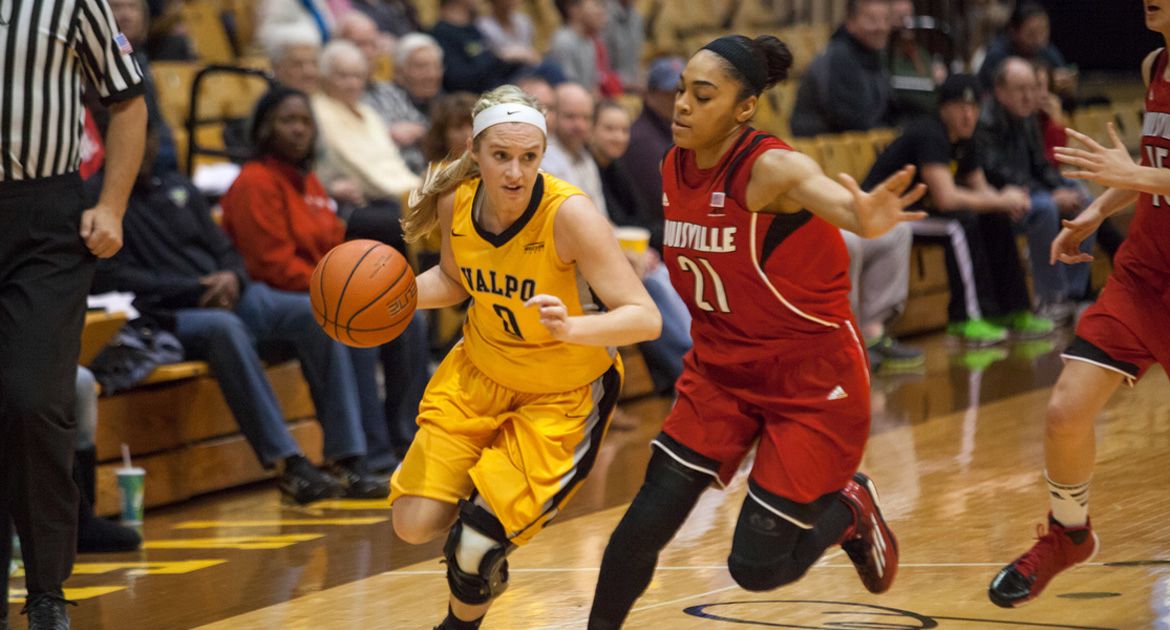 Next Up in Crusader Basketball: Valparaiso travels to Vermillion, South Dakota for the first time ever Tuesday. The Coyotes, who are reigning Summit League champions, are in the midst of a five-game homestand and look to remain perfect (3-0) at the DakotaDome. Meanwhile, the Brown and Gold enter Tuesday’s tilt attempting to snap a four-game losing streak. A win would represent the Crusaders’ first away from home since November 20th.

Last Time Out: Tulsa had five players finish in double figures Saturday at the ARC as the Golden Hurricane rolled to an 87-63 win over the Crusaders. Freshman Jasmyn Walker had her best game yet in a Valpo uniform. Her 16 points and nine rebounds paced the Brown and Gold. Haylee Thompson pitched in 14 points while Dani Franklin added 12. The Crusaders committed a season-low 12 turnovers, but Tulsa knocked down a school-record 15 three-pointers.

Head Coach Tracey Dorow: Tracey Dorow (20-50) is in her third season at the helm of the Valparaiso women’s basketball program in 2014-15. She collected her 250th career victory on November 14th, 2014 after a 91-57 walloping of Butler. In her first season, Dorow led the Crusaders to eleven victories overall, including five in Horizon League play. Dorow arrived in Valparaiso after 14 seasons at Ferris State. She compiled a 232-163 record while with the Bulldogs. Furthermore, Ferris State posted the #1 grade point average in all of Division II for the 1999-2000 women’s basketball season as well as the #2 ranking in 2002-03.

Series Notes: Valparaiso and South Dakota met for the first time in history last season at the Athletics-Recreation Center. The Coyotes won an 81-70 contest on December 31st, 2013.

Storylines...
- South Dakota shot 32-of-55 (58.2%) from the field in last season’s meeting at Valpo.
- Opponents have made 12 or more three-pointers in three of the last four games versus Valpo.
- Vermillion is as far west as the Crusaders will travel this season.
- The Crusaders haven’t allowed fewer than 82 points in a game since Nov. 22nd.
- Both head coaches are in their third seasons.

@ValpoWBB...
- @ValpoWBB shot 77.6% from the free-throw line in 2013-14, the highest percentage ever in school history.
- @ValpoWBB was picked to finish eighth in the Horizon League in the 2014-15 Preseason Poll.
- Saturday was the first time @ValpoWBB won the turnover battle this season.
- @ValpoWBB’s opponents’ rebound total the last three games: 48, 48, 48.
- @ValpoWBB has finished with an odd-numbered point total in every game thus far.
- Only one team in Division I basketball averages fewer steals per game than @ValpoWBB’s 3.6: Saint Peter’s (3.2).

Jessica Carr
- Distributed a career-high eight assists versus Tulsa on Saturday.
- Collected her 200th career assist at Akron on Nov. 25th.
- Recorded game highs in points (16) and assists (6) to lead Valpo to a 79-61 win versus Tennessee Tech..

Lexi Miller
- Owns the team’s best assist-to-turnover ratio (1.6).
- Finished a point shy of her career-high at NIU as she guided Valpo with 17 points on 4-of-5 shooting from three-point range.

Jasmyn Walker
- Scored 16 points and corralled nine rebounds last time out.
- Has started all eight games to open her Crusader career.
- Ripped down 14 rebounds to go with nine points at NIU last Thursday.