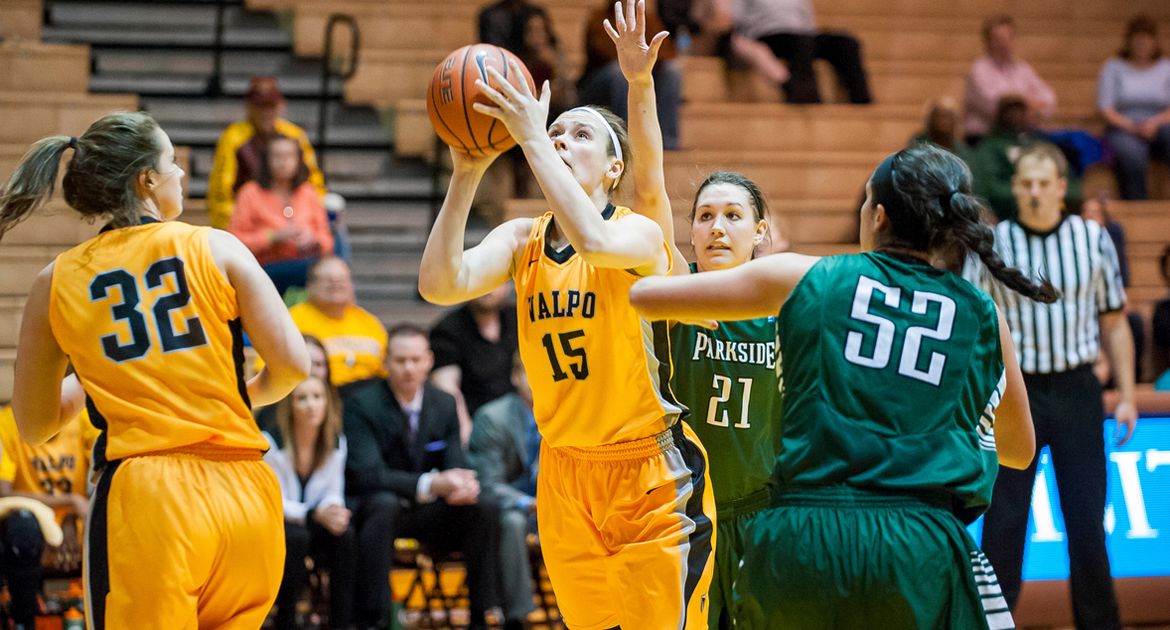 Anne Hamilton (Chanhassen, Minn./Minnetonka) had the half of her life, Jessica Carr (Arcadia, Ind./Hamilton Heights) finished with career highs in points and rebounds, but it wasn't enough as SIU-Edwardsville turned a four-point halftime deficit into a 77-65 victory over Valparaiso at the Vadalabene Center on Saturday afternoon.

The start of the game was pushed back a little more than twenty minutes as a campus-wide power outage left those in attendance in the dark. Hamilton, who received her first start of the season, had her own lights-out display from the field. She connected on four of her first five attempts from three-point range as she poured in 16 first-half points.

The Crusaders were in control for the majority of the first half, but failed to advance their lead past eight points. On five separate occasions, the Brown and Gold led by eight.

SIUE's Tierny Austin made it a 29-28 game following a layup with 24 seconds to play. Carr knocked down a trey from the point in the Crusaders' final possession of the half to put them ahead 32-28. Despite taking ten more first-half shots than Valpo, the Cougars found themselves playing from behind at home for the first time this season.

Game-opening runs have represented Valpo's Achilles' heel this month. Saturday, it was the second half that proved to be Valpo's bugaboo.

The Cougars opened the second half on a 16-2 surge that took fewer than five minutes. A pair of Donshel Beck free throws at the 15:16 mark put SIUE ahead 44-34.

SIUE neutralized Hamilton during the closing period as the freshman did not log a field goal attempt. Meanwhile, the Cougars outworked Valpo on the boards en route to 16 second chance points in the second half. The home team outrebounded Valpo 30-16, including 12 on the offensive end.

Valpo cut it as close as six points in the final minute, but the Cougars hit their free throws to hold on for a 77-65 win.

Carr turned in a strong effort with a career-high 22 points, eight rebounds - also a career watermark - and seven assists. The senior led Valpo in all three categories. She was 8-for-16 from the floor including 5-of-9 from three-point range.

Dani Franklin (Cedar Rapids, Iowa/George Washington) was a perfect 4-for-4 from the charity stripe as she added ten points.

Valpo (3-8) will have the next ten days off before returning to the court versus Purdue-Calumet. Tip-off is set for 7:05 pm on Dec. 30th at the Athletics-Recreation Center. Brandon Vickrey and Renee Turpa will have the call on the Valpo Sports Radio Network. Links to the audio, video, and live stats will be available at ValpoAthletics.com.