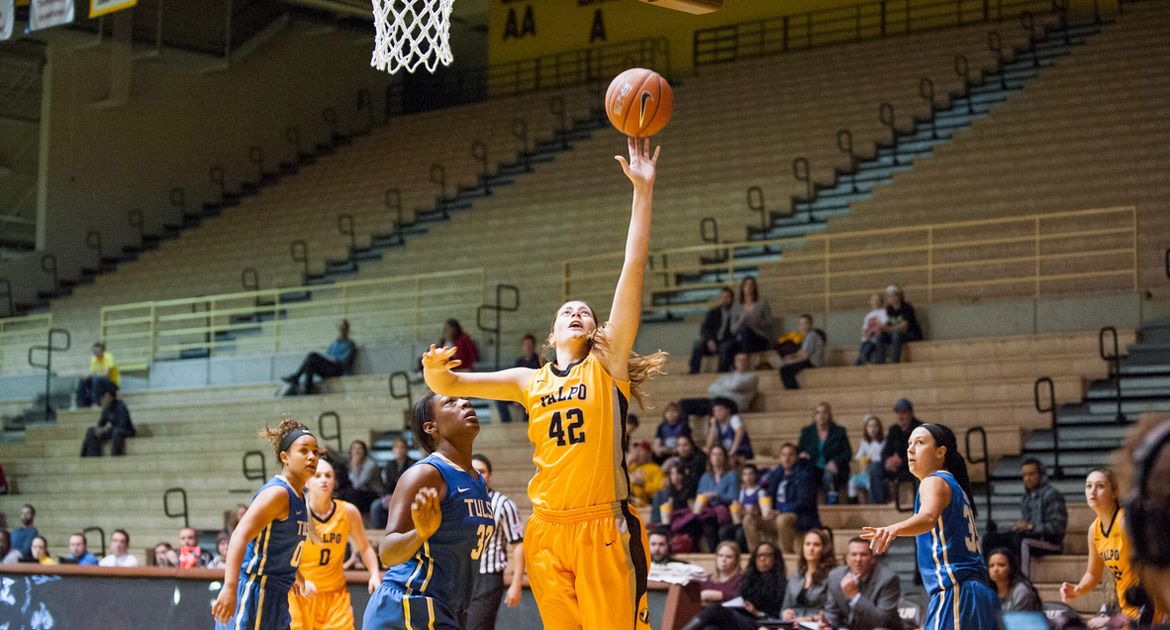 Redshirt sophomore Haylee Thompson (Hailey, Idaho/Wood River [Utah State]) nailed down her second straight double-double, Jasmyn Walker (Muskegon, Mich./Mona Shores) put together one of her strongest games in a Crusader uniform, but a pair of bookend runs by Stetson lifted the Hatters to a 73-62 win Saturday at the Athletics-Recreation Center.

"I'm really proud of the effort we had. We competed with them. It's a game of spurts, but I thought we did a better job of controlling them," head coach Tracey Dorow said afterwards.

The visitors rushed out to a 12-2 lead thanks to points from four different players. Freshman Dani Franklin (Cedar Rapids, Iowa/George Washington) got the Crusaders right back in it with a triple on a heads-up feed from Jessica Carr (Arcadia, Ind./Hamilton Heights). The Hatters later expanded their lead to as many as a dozen points, but Carr led a Valpo charge over the final seven minutes that trimmed the margin to three.

The senior led all scorers at the half with ten points, five of which came from the free-throw line. Walker did her part down low as she secured six boards and tossed in nine points.

The Brown and Gold were unable to cut it closer than three points, though.

Stetson's Amber Porter knocked down a jumper to give the Hatters a 46-38 advantage four minutes into the closing period. Walker answered with an old-fashioned three-point play before Anne Hamilton (Chanhassen, Minn./Minnetonka) raised the nylon on an eight-footer, bringing the contest to 47-43.

The Hatter defense limited Valparaiso to just one field goal over the next eight-and-a-half minutes while SU embarked on a 17-2 run to stave off the home team.

Stetson endured an 0-for-15 drought from beyond the arc that spanned from nine minutes to play in the first half until seven minutes remaining in regulation. Nine offensive rebounds in the final twenty minutes aided the Hatters' retort. Guard Jama Sharp, a Mooresville, Indiana product, registered her 1,000th career point just 32 seconds into the tilt with a three-pointer from the left wing.

For Valpo, Thompson notched her second double-double in as many games as she contributed 11 points (5-9 field goals) and 11 rebounds. Walker was 6-of-12 from the floor as her 16 points led the Crusaders. The freshman corralled eight boards to boost her season average 6.6 RPG. Carr added 15 points and six assists. She was 10-of-12 from the charity stripe.

The Crusaders (4-9) will have a few days to prepare for their Horizon League opener on Thursday at Cleveland State (8-5). The Vikings are led by preseason All-League players Cari Coleman (16.2 PPG, 26 steals) and Imani Gordon (14.5 PPG, 6.5 RPG).