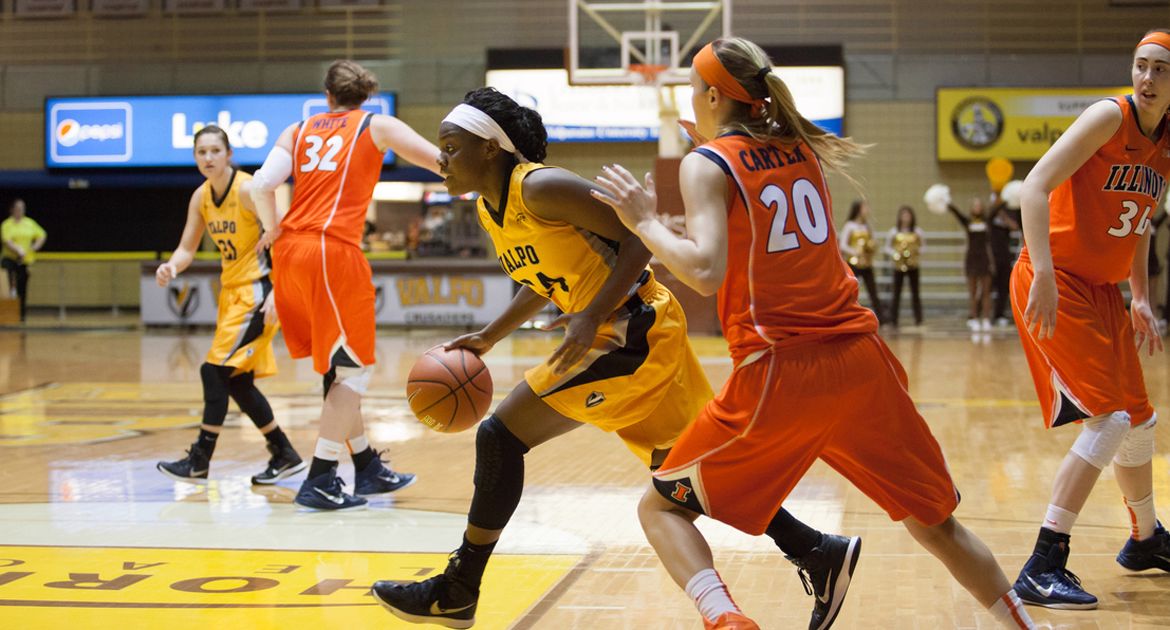 Walker continued her elevated play as the Brown and Gold cut the ribbon on the league schedule. The forward was 5-for-6 from the field in the opening period - including a three - to pace all scorers with 11 at the break. Valpo held a 36-31 advantage over the Vikings at the half. The Crusaders made it to the foul line just once in the first twenty minutes, but were 5-of-7 from beyond the arc.

Lexi Miller (Caledonia, Mich./Caledonia) came on strong for the Crusaders in the closing minutes. The junior was responsible for Valpo's final eight points of the first half, a stanza that saw the Brown and Gold ahead for 18:32. Miller ended the night with 12 points.

Walker temporarily commandeered the lead again, but Cleveland State went on a 16-5 run to enjoy a nine-point lead of its own. In the midst of that Viking spurt, the Crusaders endured a 7-minute, 52-second field goal drought. Dani Franklin (Cedar Rapids, Iowa/George Washington) brought an end to the slump with a layup just before the under-4 media timeout. Franklin chipped in 10 points in 16 minutes of play. The freshman was 4-of-7 from the field including a triple on her only perimeter attempt.

Valpo trimmed the deficit to as low as six points on four separate occasions down the stretch, but superb free-throw shooting clinched a seven-point victory for Cleveland State. The Vikings converted 13 of 15 attempts at the charity stripe in the second half.

Cleveland State committed a season-low six turnovers. Gordon and Cari Coleman both registered 19 points, with a healthy chunk of those points coming at the line.

Walker shot 7-for-11 from the floor and 3-of-4 from the free-throw line en route to an 18-point evening. She grabbed her tenth rebound at the 7:20 mark of the second half to secure her first double-double in a Crusader uniform. Over the last three games, Walker is averaging 18.0 PPG and 7.3 RPG.

Overall, the Crusaders shot 58.3% (7-12) from beyond the arc, their second-highest perimeter percentage this season. Thursday night represented the first game to be decided by single digits this season for the Brown and Gold.

Valparaiso (4-10, 0-1 Horizon) will have a quick turnaround as it will entertain UIC (10-4, 0-1 Horizon) Saturday afternoon at 1:35 pm. Links to the live video, audio, and live stats are available at ValpoAthletics.com.