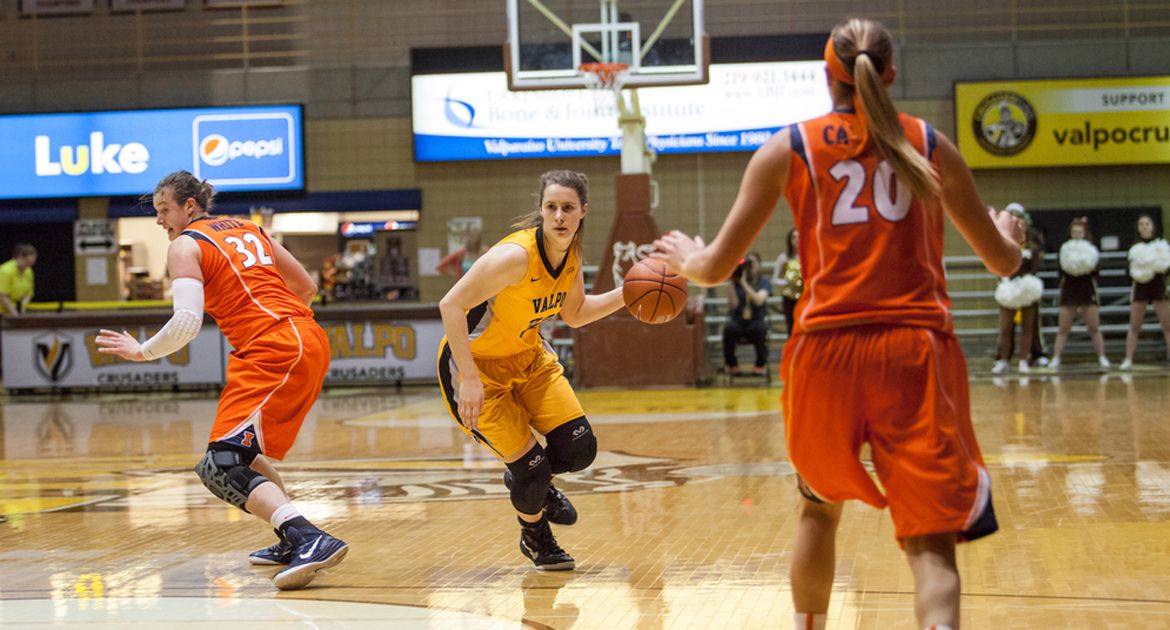 What began as an intriguing battle between two budding freshmen blossomed into a thorough team effort from the Crusaders Thursday night. Valpo manufactured a 74-68 victory over the Titans in Motor City thanks in part to three players finishing in double figures.

Titan guard Rosanna Reynolds helped Detroit seize the first noticeable margin of the evening. Her jumper at the 12-minute mark put UDM ahead 14-7. The Crusaders utilized a balanced offensive onslaught over the next four minutes, countering with a 15-2 run. Freshman Anne Hamilton (Chanhassen, Minn./Minnetonka) tied the game at 16 apiece with a three from the right wing, and Franklin's first triple of the tilt put the Brown and Gold ahead 19-16. A Sharon Karungi (Kampala, Uganda/[Northern Oklahoma College]) jumper put a bow on top of the Crusader surge.

Valpo held freshman Darianne Seward scoreless until the 2:35 mark of the opening period, but the newcomer more than made up for lost time. Her first points, which came via the three-pointer, minimized the Crusaders' largest lead and made it 33-26. Seward tallied Detroit's final 11 points of the half as the Brown and Gold had a 37-34 advantage at the break.

Franklin and Seward both led all scorers with 11 points after the first horn. Franklin was 5-for-5 from the floor, including a trey; Seward was 4-of-5 from the field and connected on all three attempts from beyond the arc.

Valpo's three-point lead degenerated into a deficit of the same quantity following a rapid 6-0 Detroit half-opening run. Hamilton silenced a raucous hometown crowd with a triple from the corner to tie things up with 16 minutes remaining.

The Brown and Gold held a narrow edge for the next nine minutes before Seward put the Titans ahead 56-55 by virtue of a triple. Carr answered 11 seconds later with a bomb from downtown to help Valpo recover the lead.

With the tilt knotted at 60-60 with four-and-a-half minutes to go, Franklin led the Crusaders on a 9-2 run to seal their first Horizon League victory of 2014-15. The freshman posted seven of her 20 points during that three minute span. She made eight of her nine field goal attempts, producing a season-best .889 field goal percentage.

Overall, Valpo's bench outscored Detroit 37-0. The Brown and Gold posted a 51% field goal percentage (26-for-51), their highest away from the ARC this season.

Valpo (5-16, 1-7 Horizon) will travel south to face Wright State (17-5, 6-2 Horizon) at the Ervin J. Nutter Center on Saturday afternoon at 1:00 pm CT. The Raiders are coming off a 92-55 thrashing of the Youngstown State Penguins Thursday morning in Dayton. Links to the audio, video, and live stats will be available at ValpoAthletics.com.