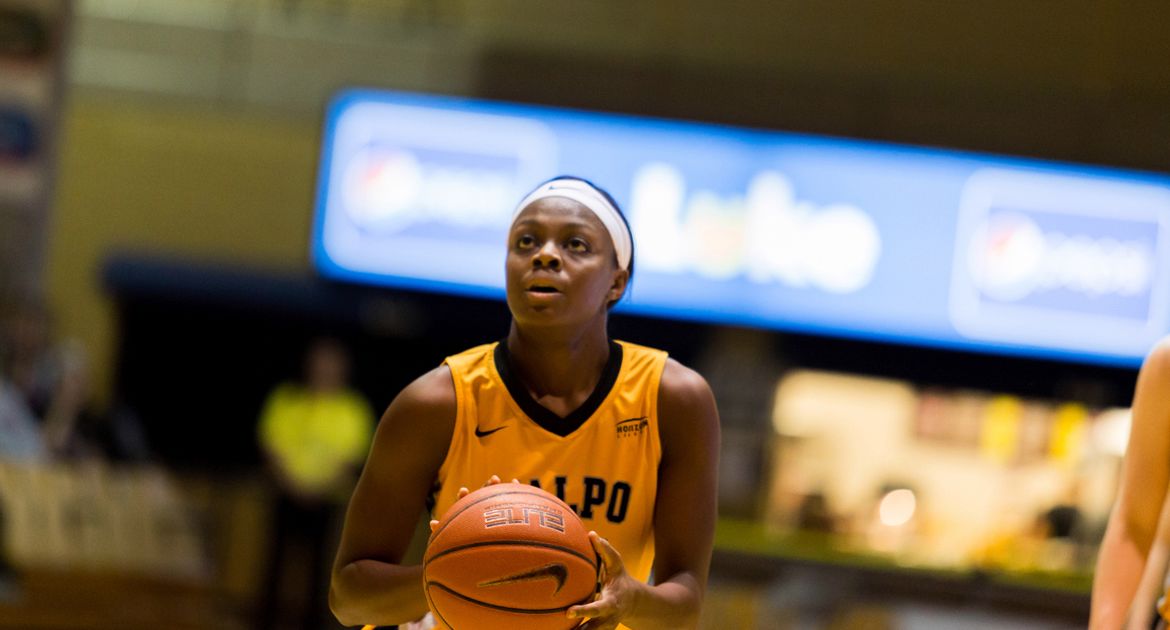 The 56 points allowed were the fewest surrendered by the Crusaders since their 65-50 win over Northern Illinois back in November.

"This was a total team win tonight. I thought we played with an incredible amount of focus," head coach Tracey Dorow said afterwards.

Both teams struggled shooting the ball right out of the gate. The game was tied 11-11 at the under-8 media timeout.

Valparaiso broke a 17-17 deadlock with a 10-2 half-closing run to seize an eight point advantage at the break. Dani Franklin (Cedar Rapids, Iowa/George Washington) poured in ten first-half points on 4-of-5 shooting. Walker had six points and seven boards after twenty minutes.

The Panthers finished the opening stanza 7-for-28 from the field. They misfired on all eight of their first-half attempts from beyond the arc. Valpo was a collective 8-for-28 at the two-minute mark, but made its last three shots of the period.

UWM's Jenny Lindner and Ashley Green knocked down back-to-back three pointers just before the first media timeout of the second half to draw the Panthers to within one point.

With Milwaukee approaching in the rear-view mirror, the Crusaders put their foot on the accelerator with a 13-3 surge.

Junior Lexi Miller (Caledonia, Mich./Caledonia) scored six of her nine points during the two-and-a-half minute onslaught. Her final three points, which came via a triple with 12:17 to play, gave the Brown and Gold a double-digit margin.

Valpo's lead didn't wither into single digits until Jaleesa Armstrong made it 62-53 with just under three minutes in regulation. The Crusaders responded with three straight baskets.

Walker's double-double was her fourth of the season, and second overall versus Milwaukee. She scored 10 points and secured 11 rebounds in last month's tilt at the Klotsche Center. Walker converted eight of her 13 field goal tries. She added two blocked shots to her stat sheet.

Franklin sank both of her three-point attempts (Valpo was just 3-of-13 overall from the perimeter) as part of a 6-for-11 shooting night. She posted 15 points and has finished in double figures six times in her last seven games.

Valpo (6-17, 2-8 Horizon) committed just ten turnovers, matching a season low. Thursday marked the Brown and Gold's first win of 2014-15 when being outrebounded. Milwaukee owned a 46-42 edge on the boards.

The Crusaders will have a week to prepare for first-place Green Bay (19-4, 9-1 Horizon). Tipoff is slated for 7:00 pm next Thursday at the Kress Events Center in Wisconsin. Links to the audio, video, and live stats will be available at ValpoAthletics.com.