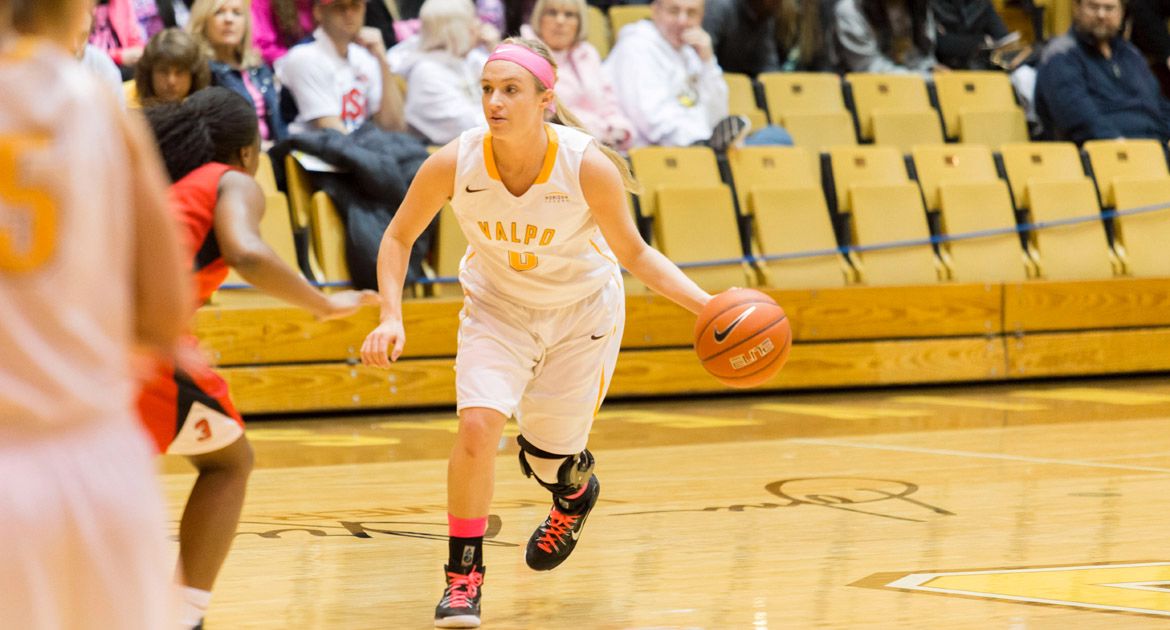 Four Crusaders made their way into double figures, but Penguin forward Heidi Schlegel recorded 38 points for the second straight game in an 87-69 Youngstown State victory Saturday afternoon at the Athletics-Recreation Center.

Jasmyn Walker (Muskegon, Mich./Mona Shores) tallied her third consecutive double-double as the freshman finished with 12 points and 11 rebounds. Junior Abby Dean (Carmel, Ind./Carmel) poured in a team-high 15 points on 5-of-9 shooting from the field and a perfect 4-for-4 day from the charity stripe.

Youngstown State connected on 12 of its 32 tries from three-point range and used a dozen second-half offensive rebounds to put the game on ice.

The Crusaders led a balanced scoring attack in the first half. Walker gave the Brown and Gold a 13-12 edge with a jumper at the 13:24 mark, but the Penguins answered with a 12-2 run - seven of which came via Schlegel - to command a 24-15 lead.

Valpo cut it to 34-30 with 90 seconds remaining in the opening stanza thanks to an Annemarie Hamlet (McBain, Mich./McBain [Oakland]) triple setup nicely by Jessica Carr (Arcadia, Ind./Hamilton Heights). But as was the story much of the afternoon, Schlegel kept YSU in front. The senior accounted for the Penguins' final eight points of the half.

Youngstown State led Valpo 40-32 at the break. Schlegel had 19 points in the first twenty minutes.

The Penguins employed seven treys in the second half, three of which came off the hand of sophomore Kelsea Newman.

Senior Sharon Karungi (Kampala, Uganda/[Northern Oklahoma College]) scored six of her 10 points in the opening three minutes of the final period. Her final basket of the surge brought Valpo to within 47-40.

Carr's raised the nylon on her 100th career three-pointer just a few minutes later to make it a two-possession game at 57-52. However, as was the case in the first half, when Valpo drew within striking distance, YSU pulled ahead with a quick blitz. Youngstown State freshman Indiya Benjamin capped off a 19-6 run with 5:27 to play to expand the Penguin advantage to 76-58.

Twelve offensive rebounds allowed Youngstown State to kick it back out, reset, and eat valuable time off the clock.

Schlegel finished with a game-high 38 points and 11 rebounds, matching her best offensive outing just two days prior at Milwaukee.

Walker ended the afternoon with 12 points and 11 rebounds, netting her third consecutive double-double and sixth in twelve Horizon League contests. Carr's 3-for-4 day beyond the arc helped her to a 10-point tilt.

Valpo (6-19, 2-10 Horizon) continues its homestand Wednesday evening versus Cleveland State (15-10, 7-5 Horizon). The Vikings took the first game of the regular-season series 69-62 at the Wolstein Center in early January. Links to the audio, video, and live stats will be available at ValpoAthletics.com.