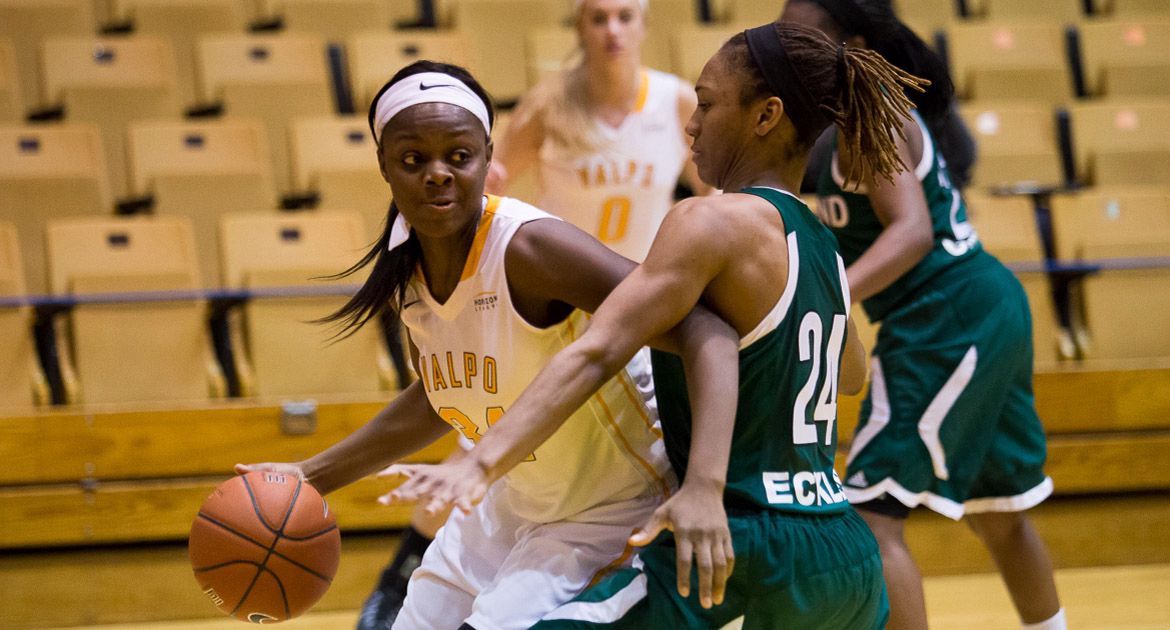 Jasmyn Walker (Muskegon, Mich./Mona Shores) tossed in a layup late to clinch her fourth straight double-double and seventh in Horizon League play. Walker put up 11 points and 13 rebounds. Sharon Karungi (Kampala, Uganda/[Northern Oklahoma College]) paced the Brown and Gold in scoring with 14 points, a season watermark for the senior. She finished one rebound shy of her second double-double of the season.

Valpo raced out to a 7-0 lead early on. The Viking triumvirate of Cori Coleman, Alexis Eckles, and Kiersten Green got Cleveland State back into the thick of things before the official timeout. The tail end of back-to-back threes off the hand of Green gave the visitors a 16-15 advantage.

A Crusader lead that was eight points at one juncture (15:41 mark) reversed into an 11-point deficit by the final media timeout.

Dani Franklin (Cedar Rapids, Iowa/George Washington)'s only triple of the evening nudged Valpo to within five, but an Alexis Eckles putback with two seconds left in the stanza provided Cleveland State with a 40-33 halftime lead.

The Crusaders emerged from the locker room to make it a one-possession game for the better part of eight minutes in the second period. Junior Abby Dean (Carmel, Ind./Carmel) nailed a three from the corner to tie the game at 52-all with 11 minutes remaining.

However, it took the Vikings a little less than four minutes to re-establish a double-digit edge as Eckles and Imani Gordon delivered the knockout blows for Cleveland State. The Vikings commanded a 67-56 lead with seven-and-a-half minutes left in regulation.

A pair of Jessica Carr (Arcadia, Ind./Hamilton Heights) free throws with under a minute to play made it a 73-68 tilt, but that was as close as the home team would get. The Vikes were a perfect 4-for-4 from the charity stripe down the stretch to snatch a 77-70 victory.

Annemarie Hamlet (McBain, Mich./McBain [Oakland]) finished in double figures for the first time since January 10th. Her 10 points came on 4-of-9 shooting. Carr finished with 11 points and three assists opposite zero turnovers.

Dean tossed in 10 points, but her night was cut short after she was whistled for her fifth foul at the 5:37 mark of the closing half.

Cleveland State received a pair of double-doubles thanks to strong performances from Gordon and Coleman. Gordon led all scorers with 20 points to accompany her 10 rebounds. Coleman, who recorded her 1,500th career point following a second-half trey, poured in 17 points and corralled 15 boards. Eckles added 18 points and nine rebounds.

Valpo (6-20, 2-11 Horizon) closes out its home slate Saturday afternoon versus Detroit (10-15, 5-7 Horizon). The Crusaders will honor senior players Jessica Carr and Sharon Karungi as well as senior manager Jessica Dill prior to the 1:35 pm CT tip. Saturday will also serve as Father/Daughter game. Each daughter in attendance with her father will receive a t-shirt and team-autographed poster. The cost is $10 for each father/daughter pair and $4 for each additional daughter. For more info, contact Renee Turpa at Renee.Turpa@valpo.edu or by phone at 219-464-5112.

Links to the audio, video, and live stats are up at ValpoAthletics.com.