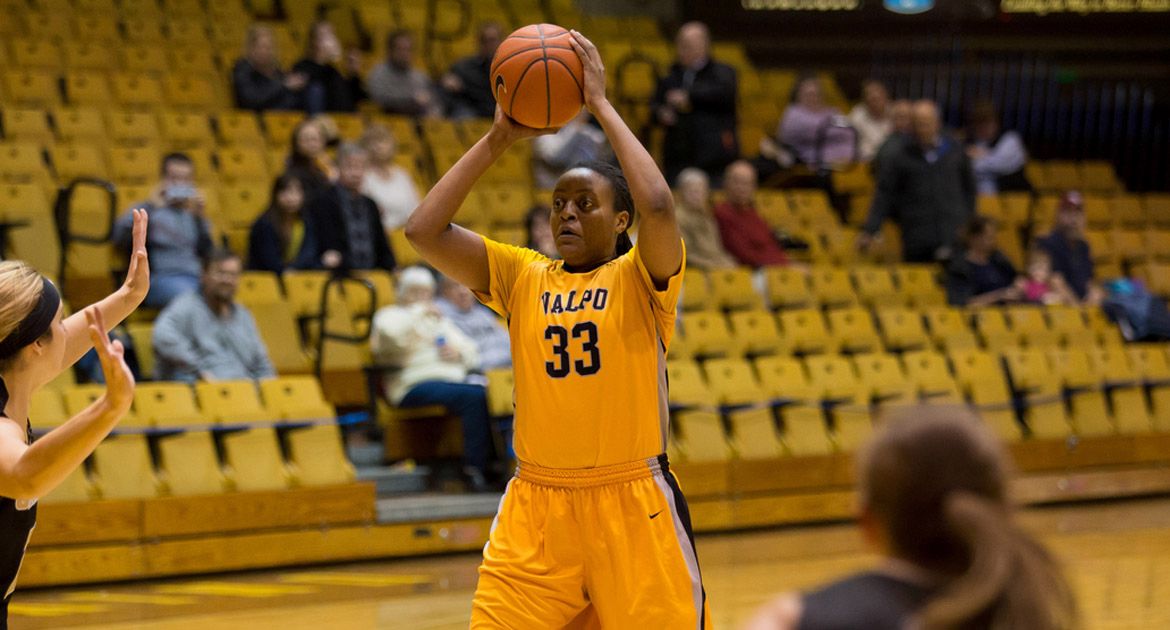 Senior Sharon Karungi (Kampala, Uganda/[Northern Oklahoma College]) and freshman Jasmyn Walker (Muskegon, Mich./Mona Shores) both logged double-doubles, but Detroit shot 50% from the field to score a 78-57 victory over Valpo on Saturday afternoon at the Athletics-Recreation Center.

All five starters for Detroit finished in double figures, including Haleigh Ristovski and Nicole Urbanick who tallied team-high 17 points.

Junior Lexi Miller (Caledonia, Mich./Caledonia) kept the Titans from running away with the game right out of the gate. She scored five of Valpo's first seven points. Her free-throws following the first official timeout cut Detroit's lead to 8-7. The Titans rattled off eight unanswered points to establish a comfortable lead at the 13-minute mark. Trailing by ten, Valpo assembled a 12-6 surge to make it 26-22 with just under seven minutes remaining in the stanza.

The game of runs wasn't through, however. The Titans closed the half on an 18-6 blitz.

Four Detroit players - Ristovski, Urbanick, Rosanna Reynolds, and Brianne Cohen - shot 4-for-6 from the field in the first twenty minutes. The Titans recorded 12 assists on 19 field goals as they shot 54.3% (19-35) overall in the opening period.

The Crusaders faced a swarming Detroit defense on the perimeter. The Brown and Gold connected on just one of ten attempts from beyond the arc. Karungi and Walker each posted six points to lead the first-half scoring for Valpo.

Valpo emerged from the locker room to score the first two baskets of the second half, trimming the margin to 11. That was as close as they go it, though. Back-to-back threes from Ristovski and Urbanick provided ample cushion for the visitors.

Karungi and Walker both solidified double-doubles in the latter stages of the closing period.

Walker scored 12 of her game-high 18 points in the second half. The freshman now has five straight double-doubles and eight on the season. Karungi smothered six boards and added seven points after halftime.

Senior Jessica Carr (Arcadia, Ind./Hamilton Heights) finished with six points, five boards, and three assists. Her next assist will be the 300th of her career.

By virtue of Milwaukee's 76-69 win over Cleveland State on Saturday, Valpo is now guaranteed the ninth seed in the Horizon League Tournament and will travel for the play-in game.

Valpo (6-21, 2-12 Horizon) will hit the road next week for a swing trip through Oakland and Youngstown State. The Crusaders will face the Golden Grizzlies (11-16, 5-9 Horizon) at the O'Rena on Thursday at 7 pm ET/6 pm CT. Links to the audio, video, and live stats will be available at ValpoAthletics.com.