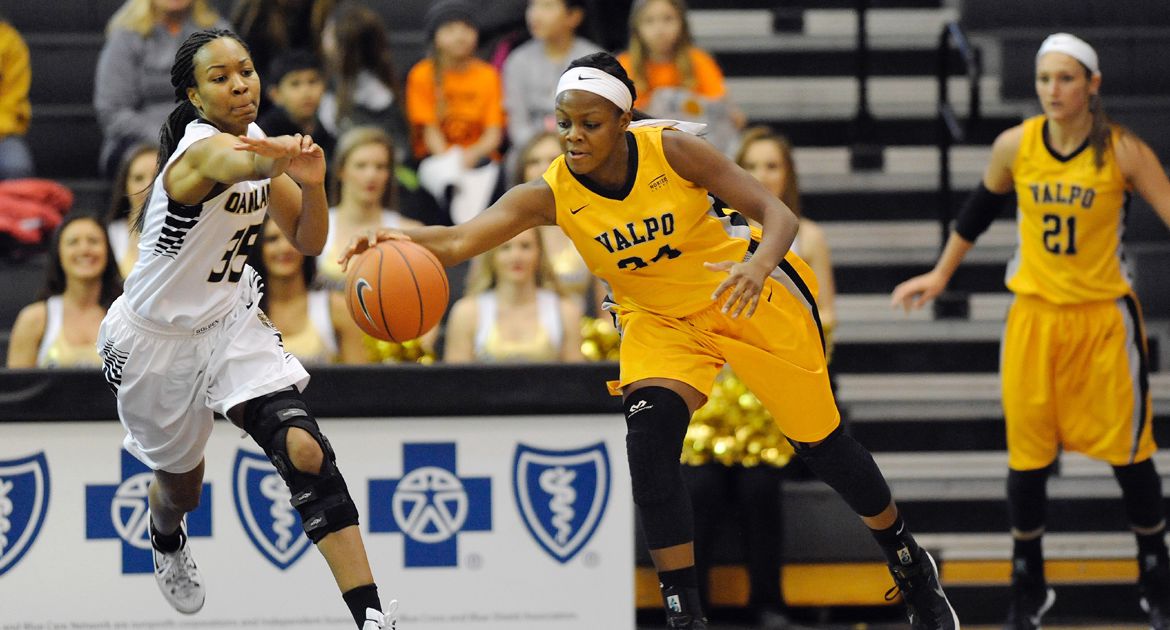 The Valparaiso women's basketball team saw a two-point halftime lead evaporate in a 70-55 loss to Oakland at the Athletics Center O'Rena Thursday night in Rochester, Michigan.

Freshman Jasmyn Walker (Muskegon, Mich./Mona Shores) squeezed a career-high 15 rebounds to go with seven points. Classmate Dani Franklin (Cedar Rapids, Iowa/George Washington) regained her early-February form as she posted 22 points on 8-of-13 shooting. The 22 points matched her career-best versus a Division I opponent.

Both teams limped out of the gate with a combined 6-for-27 shooting and nine turnovers leading to an 8-7 Oakland lead at the under-12 media timeout.

The pace picked up considerably over the closing ten minutes of the first half. Franklin nailed a three-pointer to cap off a 12-2 Crusader run that expanded their lead to seven points, but Amy Carlton immediately responded with a triple of her own. Despite a constant back-and-forth, Valpo maintained a two-possession edge for the better part of the final seven minutes.

The Golden Grizzlies were stuck on 21 points for nearly four-and-a-half minutes, but recorded the last four points of the period in the final 19 seconds. Elena Popkey drained a jumper before a Peyton Apsey theft translated into two made free-throws from Olivia Nash.

Oakland's Nola Anderson put the Golden Grizzlies on her back in the second half to wrestle the lead away from the Brown and Gold. The sophomore scored 12 of her team-high 15 points in the first eight-and-a-half minutes of the closing stanza.

A 19-4 run catapulted Oakland ahead 44-31 with 13:36 to play. The deficit teetered from eight to ten points until the under-8:00 media break. The Crusaders cut it to single digits just once more, but the Golden Grizzlies shot superbly from the charity stripe down the stretch.

Franklin was 4-for-6 from the field and a perfect 4-for-4 from the foul line in the second half. She accounted for 13 of Valpo’s 28 points after the break. Walker controlled the boards for all 32 minutes played. Nine of her career-high 15 rebounds came in the opening period.

Both teams struggled mightily from the perimeter; Valpo was successful just five times on 23 attempts, while Oakland made four of 21 tries from downtown. The Golden Grizzlies controlled a 14-1 margin on steals.

Valpo (6-22, 2-13 Horizon) will march on to Northeast Ohio on Saturday afternoon to face the Youngstown State Penguins (19-9, 8-7 Horizon) at the Beeghly Center. Tip-off is scheduled for 2:05 pm ET/1:05 pm CT. Audio, video and live stats will be available for the regular season finale. Those links are up at ValpoAthletics.com.