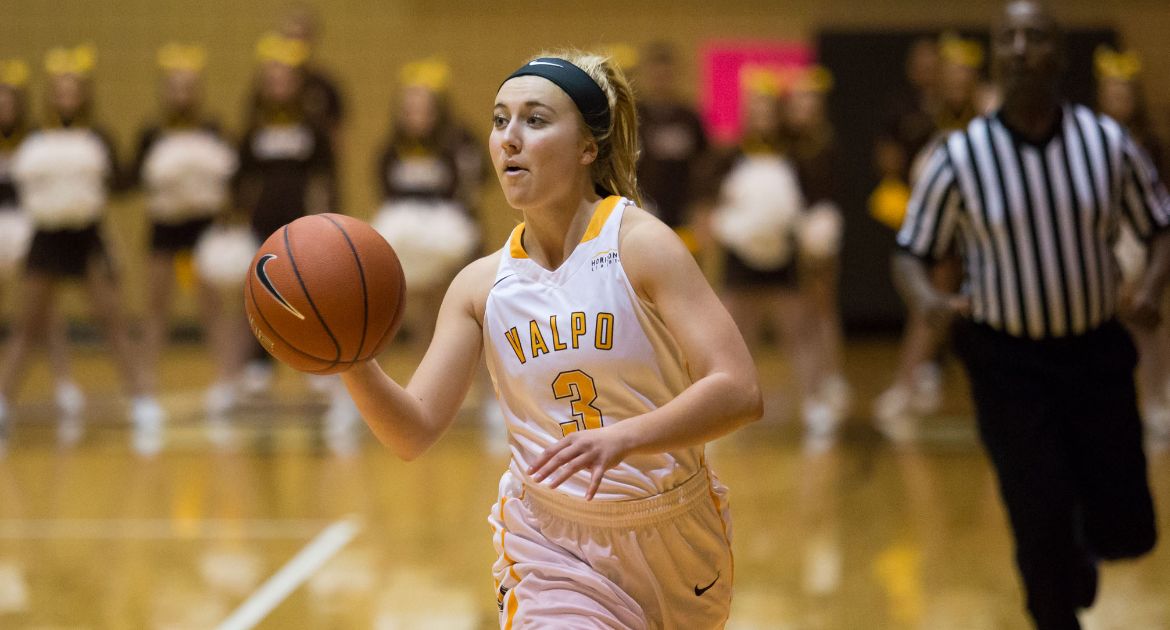 Freshman Hannah Schaub was 5-of-9 from beyond the arc as she finished with 19 points and nine assists Saturday. (Avery Davis)
Purdue Calumet at Valpo | October 31, 2015
Related Links
Related Links

The Crusader women's basketball team shot 49.4% from the field as they rolled to a 94-78 victory in an exhibition contest versus Purdue Calumet. Jasmyn Walker (Muskegon, Mich./Mona Shores) posted 19 points and eight rebounds while freshmen Meredith Hamlet (McBain, Mich./McBain) and Hannah Schaub (Brooklyn Park, Minn./Park Center) pitched in 18 and 15 points, respectively.

Valpo displayed outstanding ball movement for much of the afternoon. The Crusaders recorded 28 assists on 38 field goals. Head coach Tracey Dorow received a combined 83 minutes amongst three freshmen. Schaub finished an assist shy of a double-double while the younger Hamlet squeezed five boards and dished out four assists. Rookie Amber Lindfors (Elk Grove Village, Ill./Elk Grove Village) pulled down eight rebounds and swatted shots as she made her presence known on the defensive end of the court.

After a back-and-forth first five minutes of the opening quarter, Hamlet canned a triple with 1:14 on the clock to cap an 18-3 Crusader surge that put the Brown and Gold ahead, 27-11. Valpo led 28-16 after ten minutes.

The Crusaders maintained a double-digit lead for the better part of the second quarter. Purdue Calumet's Jada Buggs and Cassidy Deno kept the Peregrines within striking distance as halftime neared, though. Following a Deno three-pointer, Michaela Kikendall knocked down a jumper to trim the margin to five points. Schaub propelled Valpo into the locker room on a high note, however, thanks to a buzzer-beating trey set up nicely by Walker. Valpo held a 45-37 advantage at the break.

Abby Dean (Carmel, Ind./Carmel) was a stellar 4-for-5 from the floor as she dropped in eight first-half points. Hamlet led the Valpo scoring attack with nine points. As a team, the Brown and Gold were 19-of-38 (50%) shooting from the field.

The Peregrines opened the second half with a surge led by Deno and Buggs.

Katie Wampler knocked down a pair of foul shots a little more than three minutes into the third quarter to cut it to a one-possession game. Schaub and Buggs then traded triples to make it 54-52 in favor of Valpo with six minutes remaining in the period.

The Crusaders were unable to score on their ensuing possession and eventually saw their lead evaporate after Deno dropped her second three-pointer of the afternoon.

Purdue Calumet's lead lasted less than a minute, however, thanks to Schaub. The freshman crashed the boards and corralled a missed three-pointer before knocking down one of her own from the wing. Schaub then connected on her fifth shot from downtown a couple minutes later to push Valpo's lead back up to six.

Meredith Hamlet raised the nylon on a pair of free-throw attempts following a steal with 7:49 left in regulation to boost the Brown and Gold's lead into double figures.

The Crusaders never looked back as they notched a 94-78 victory in their lone exhibition contest.

Valpo will open its 2015 season Friday, November 13th at Hinkle Fieldhouse in Indianapolis. Tipoff against the Butler Bulldogs is slated for 7:00 pm ET/6:00 pm CT. Links to live coverage will be posted at ValpoAthletics.com.