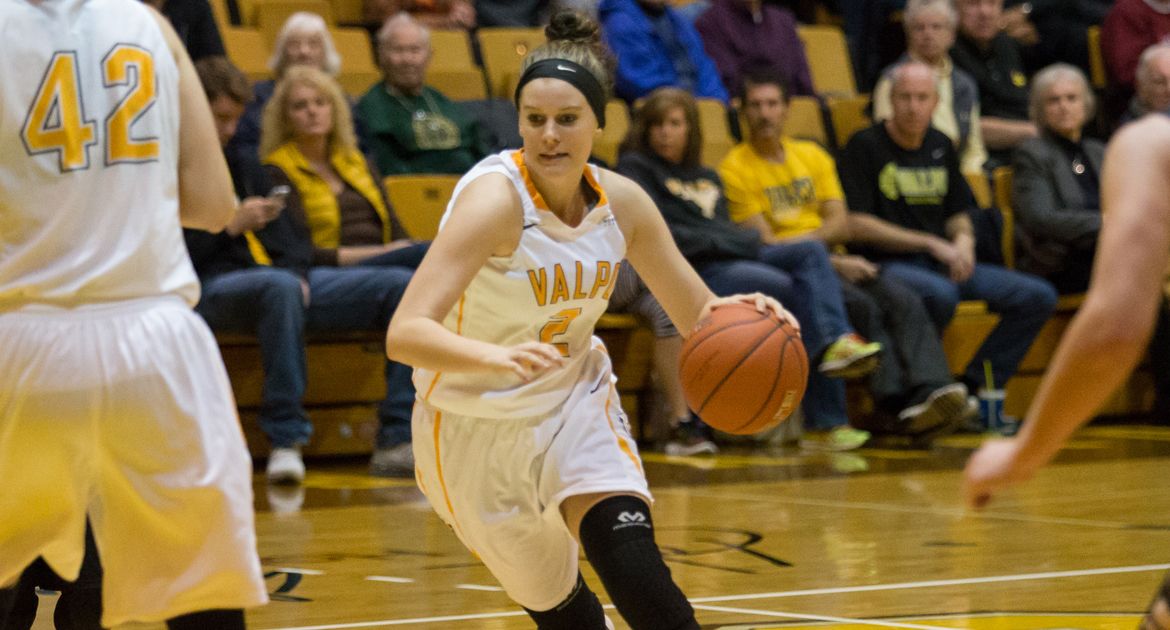 Next Up in Crusader Basketball: The Crusader women’s basketball team makes their first trip to the Golden State in six years this weekend. Valpo will square off against a pair of 2015 WNIT teams in San Diego and Northern Colorado at the USD-Courtyard San Diego Central Classic. The Toreros represent the third consecutive undefeated opponent to face the Brown and Gold.

Last Time Out: The Crusaders shot 50% from the field in the second half of their Monday night tilt versus the third-ranked Fighting Irish, but freshman Marina Mabrey was too much to handle for Valpo. Mabrey posted 18 points, 10 assists, and 12 steals to record just the fifth triple-double in Notre Dame history. Freshman Meredith Hamlet led the scoring attack for the Brown and Gold with ten points, but the Irish emerged with a 110-54 victory at the Athletics-Recreation Center.

Following the Crusaders: Audio - WVUR (95.1 FM, Valparaiso) Brandon Vickrey (PxP), Parker Gatewood and Renee’ Turpa (Color). Video - Friday’s game will be available on TheW.TV. Saturday’s game will not feature video. Links for the audio, video, and live stats are available at ValpoAthletics.com. In addition, follow @ValpoWBB on Twitter for in-game updates and a behind-the-scenes look at the Crusaders throughout the season.

Head Coach Tracey Dorow: Tracey Dorow (23-71) is in her fourth season at the helm of the Valparaiso women’s basketball program in 2015-16. She collected her 250th career victory on November 14th, 2014 after a 91-57 defeat of Butler. In her first season, Dorow led the Crusaders to eleven victories overall, including five in Horizon League play. Dorow arrived in Valparaiso after 14 seasons at Ferris State. She compiled a 232-163 record while with the Bulldogs. Furthermore, Ferris State posted the #1 grade point average in all of Division II for the 1999-2000 women’s basketball season as well as the #2 ranking in 2002-03.

Series Notes: Friday and Saturday will be Valpo’s first-ever matchups against either San Diego or Northern Colorado. In fact, this weekend will represent just the seventh and eighth games played by the Brown and Gold inside the state of California in their 44-year history.

Storylines
- Valpo participated in the 2009 San Diego Surf ‘n Slam, the last time the Crusaders were in California.
- While Friday will signal the first ever women’s basketball tilt between Valpo and San Diego, the two schools have faced each other every year in football since 1997.
- Saturday’s game against Northern Colorado will be the first this season in which Valpo is opposing a team with a loss on its record.
- The last time the Brown and Gold played on back-to-back dates they left Ohio as champions of the Toledo Invite (Dec. 6th-7th, 2013).

Hannah Schaub
- One of three true freshmen to start in their first college game.
- Was a five-year letterwinner at Park Center HS (Minn.).
- Dished out a game-best three assists and chipped in six points at Butler.
- Has over 2,600 followers on Twitter (@xoxolouise21).

Abby Dean
- Has shot over 80% from the charity stripe and started 27 games each of the last two seasons.
- Enters Monday two assists shy of 100 for her career.
- Owns a 42.0% career field-goal percentage in 85 career tilts.

Annemarie Hamlet
- Has not appeared in either of the first two games of the season.
- Recorded a season-high 11 points versus Butler on Nov. 14th, 2014.

Lexi Miller
- Only returner with a positive assist-to-turnover ratio (76:69).
- Has logged more minutes than any Crusader on the roster (1,790).
- Finished in double figures eight times last season, including a career-high 21 points at Milwaukee on Jan. 21st.

Imani Scott-Thompson
- Made her Crusader debut at Hinkle Fieldhouse on Nov. 13th.
- Set the NJCAA record for three-pointers in a single season (143) last year at Dakota College at Bottineau.
- Averaged 22.4 PPG for the 2014-15 Ladyjacks.

Amber Lindfors
- Received the start in her college debut on Nov. 13th.
- Amassed seven points and six rebounds against No. 3 Notre Dame (Nov. 23rd).
- Fell victim to foul trouble at Butler and played only eleven minutes.
- Ranked 30th top prospect in Chicago area by Bret McCormick All-Star Girls Report.
- At 6’4’’, she is the tallest Crusader since Stefanie Lang (2010-12).

Dani Franklin
- Preseason All-Horizon League Second Team
- Reigning Horizon League Freshman of the Year and Sixth Player of the Year.
- Valpo’s top scorer (13.0 PPG) and field-goal shooter (47.3%) last season.
- Finished in double figures 21 times last season including five tilts of 20 points or more.
- Led the Brown and Gold in scoring on 11 separate occasions in 2014-15.
- Shot a team-high 85.7% (42-49) from the foul line as a freshman.

Jasmyn Walker
- Picked up right where she left off in the season debut, collecting eight rebounds and two blocks to go with 13 points.
- Has started all 31 games since arriving to Valparaiso.
- Recorded most rebounds ever by a freshman (250) and the sixth-most ever in a single season in program history.
- Amassed nine double-doubles in Horizon League play in 2014-15.
- Elected to 2014-15 Horizon League All-Freshmen Team.
- Named HL Freshman of the Week three times last season.
- Collected team watermark in rebounds in 14 contests.

Haylee Thompson
- Did not appear in the season opener.
- Notched back-to-back double-doubles on Dec. 30th and Jan. 3rd last season.
- Averaged 5.2 rebounds per game in non-league games a year ago.
- Spent her freshman season at Utah State.