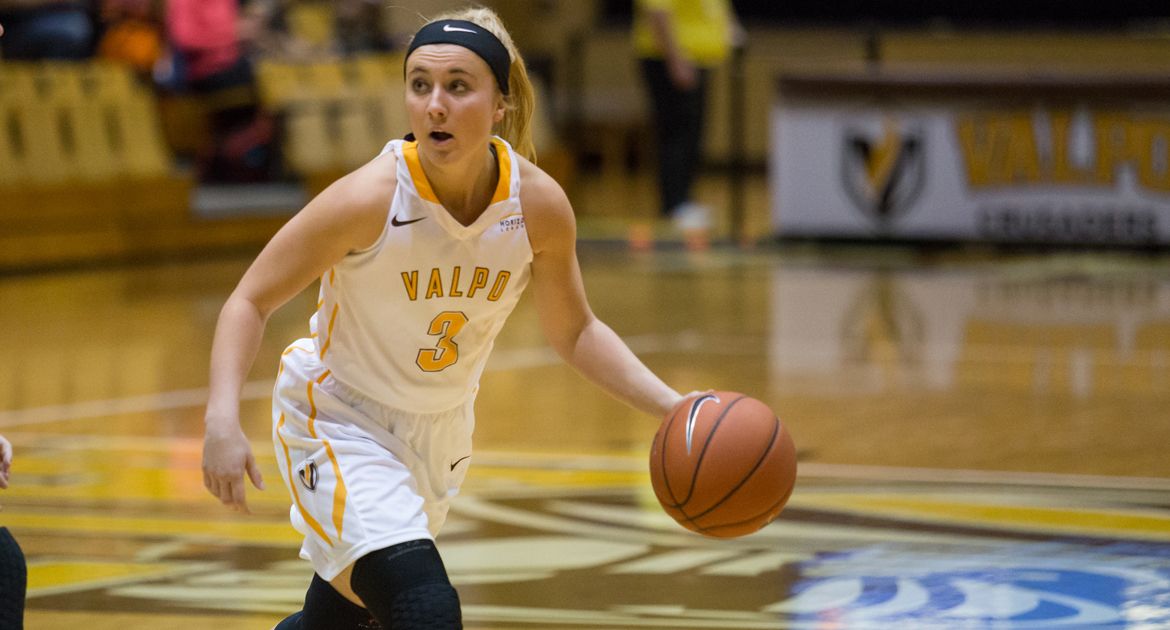 Freshman Hannah Schaub was 5-of-7 from deep as she led the Crusaders with 15 points versus Northern Colorado. (Avery Davis)
Northern Colorado at Valpo | November 28, 2015

A fierce first-quarter run allowed Northern Colorado to hang on for a 77-63 win over Valpo Saturday at the USD-Courtyard San Diego Central Classic.

Early three-pointers from Meredith Hamlet (McBain, Mich./McBain) and Hannah Schaub (Brooklyn Park, Minn./Park Center) put the Brown and Gold ahead 8-4 just two minutes into the contest. The Bears eventually tied the game at 12-12 before embarking on a 13-0 surge to close the first quarter. The Bears went 6-for-6 from the floor over the final four-and-a-half minutes of the opening period. They misfired just once from the field over the last 5:55.

Jasmyn Walker (Muskegon, Mich./Mona Shores) brought an end to UNC's run with a basket in the paint on the Crusaders' first possession of the second quarter, but Katie Longwell went off for nine points as Valpo was unable to cut the deficit to single digits.

Lexi Miller (Caledonia, Mich./Caledonia) beat the halftime buzzer with a three from the corner to trim the deficit to 45-27 heading into the break.

Schaub found her stroke from outside in the second half in doing her part to lead a comeback.

With 5:35 on the third-quarter clock, the freshman sank her third trey of the period to cut into UNC's 21-point lead, its largest of the game. Schaub added her fourth of the half - and fifth on the day - with 7:12 remaining in the final quarter to make it a 61-53 game.

Walker notched her first double-double of the season just a few moments later. She knocked down a pair of free-throw attempts to bring the Brown and Gold within six points with 3:21 to play, but it was as close as Valpo made it.

The Crusaders had four players finish in double figures. Schaub led the way with 15 while Walker posted 13 points and 13 boards. Hamlet and Abby Dean (Carmel, Ind./Carmel) chipped in ten apiece.

The Brown and Gold (0-4) return home Wednesday to face the Miami RedHawks (2-2) at 7 pm CT. ESPN3 and WVUR (95.1 FM, Valparaiso) will carry the action from the Athletics-Recreation Center. The links to audio, video, and live stats will be up at ValpoAthletics.com.