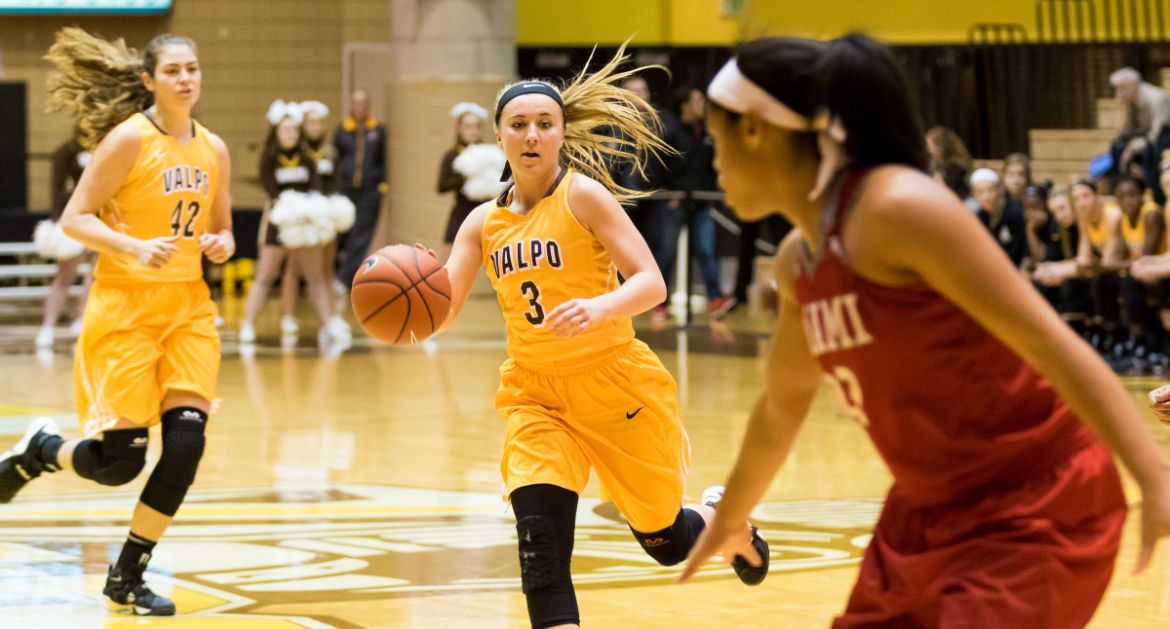 For the second time in as many games, a valiant comeback attempt from the Valpo women's basketball team just wasn't enough to erase a first-quarter hole. Miami (Ohio) outscored the Crusaders 22-11 in the first quarter, and needed every bit of the surplus to hang on for a 75-72 victory Wednesday evening at the Athletics-Recreation Center.

Senior Abby Dean (Carmel, Ind./Carmel) scored the first two points of the game just four seconds after the opening tip. Valpo went silent from the field while the RedHawks rattled off a 10-0 run to seize an early double-digit edge.

The margin swelled to as many as 17 points in the second quarter, but freshmen Meredith Hamlet (McBain, Mich./McBain) and Hannah Schaub (Brooklyn Park, Minn./Park Center) nailed a quartet of free throws late in the period to draw it to 44-31 at the intermission.

Halftime adjustments emboldened Valpo to trim the deficit to single digits following a pair of successful foul shots by Imani Scott-Thompson (Akron, Ohio/Firestone [Dakota College at Bottineau]) at the three-minute mark. The final eight points of the stanza came from the charity stripe, a by-product of a contest that saw 42 fouls.

Valpo saved its most inspired play for the final span.

Chasing as many as ten points as late as the five-minute mark, Dean sank a triple to bring it to 70-63. Miami's Baleigh Reid, who matched Dani Franklin (Cedar Rapids, Iowa/George Washington)'s 18-point output, and Jasmyn Walker (Muskegon, Mich./Mona Shores) traded jumpers before Dean made it 72-67 thanks to a layup.

Schaub made a timely steal on the other end of the court to regain possession of the ball heading into the final two minutes.

Lexi Miller (Caledonia, Mich./Caledonia) beat the shot clock with a sleek drive and left-handed lay-in to make it a one-possession game. The RedHawks knocked down a trio of free throws to push the advantage back to six, but Franklin splashed her fourth trey of the night to again make it a one-score tilt.

Valpo had three attempts from the perimeter in the final 40 seconds, but were unable to seal the gap. Miller's desperation shot from the corner a half-second ahead of the buzzer hit the side of the backboard to deny overtime.

Franklin was 4-of-11 from three-point range to finish with 18 points. Walker posted 11 points and 11 rebounds, collecting her second straight double-double. Freshman Amber Lindfors (Elk Grove Village, Ill./Elk Grove) swatted six shots - all in the first half - as she exerted her will on the defensive end of the court. The six blocks represents the third-most ever in a game by a Crusader. Only Michelle Mader (1992) recorded more in a Valpo uniform.

Dean finished with 13 points on 4-of-7 shooting. Hamlet chipped in 12 points, and Schaub tallied five assists opposite one turnover.

Miami received 18 points from Reid and 16 from Molly McDonagh.

Valpo (0-5) will travel to Kentucky on Saturday to face Louisville at the KFC Yum! Center at 3:00 pm CT. The Cardinals were ranked #8 in the USA Today Preseason Coaches Poll. WVUR (95.1 FM, Valparaiso) will have the call with live video also available. Links to the audio, video, and live stats are available at ValpoAthletics.com.