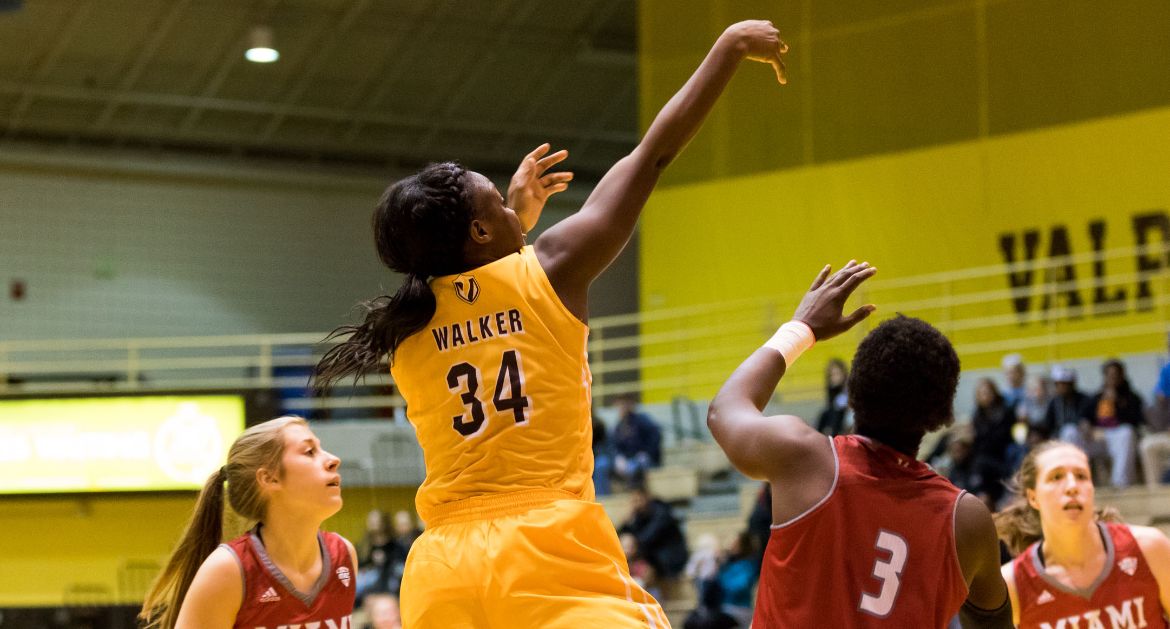 A fast-paced Louisville squad flummoxed the Crusaders Saturday at the KFC Yum! Center in Kentucky. Junior Imani Scott-Thompson (Akron, Ohio/Firestone [Dakota College at Bottineau]) led Valpo with 12 points, but the Brown and Gold fell 75-42 in front of 8,274 fans.

The Crusaders fought an uphill battle nearly all afternoon thanks to an early, furious rush by Louisville.

Scott-Thompson brought a halt to the Cards' 15-0 game-opening run at the 5:29 mark with a pair of free throws. The junior recorded five first-quarter points. After recovering from its sluggish start, Valpo outscored Louisville over the remainder of the period to make it 23-11 after one quarter.

Valpo held UL to 6-of-20 shooting in the second quarter, but the Cardinals snagged eight offensive boards in the period. The Brown and Gold trailed 37-19 at the break.

The Cardinals witnessed their lead balloon to over 30 points in the fourth quarter while the Brown and Gold endured a seven-minute field goal drought.

UL's Erin DeGrate reeled off eight second-half points to nudge her way into double figures for the day.

Jasmyn Walker (Muskegon, Mich./Mona Shores) willed her way to ten points and eight rebounds. The sophomore was 4-of-9 from the field while logging 28 minutes against a highly-physical Louisville frontcourt.

Nine of Scott-Thompson's 12 points came via the three-ball. She nailed three of her nine attempts from the perimeter.

Louisville forced 22 turnovers, right on par with its season average.

The Cardinals had five players finish in double figures, including Mariya Moore and Myisha Hines-Allen, who dropped in 12 points apiece.

Valpo (0-6) will return to Northwest Indiana to face Cardinal Stritch (10-1) on Monday evening. Tipoff from the Athletics-Recreation Center is scheduled for 7:00 pm CT. Links to audio and video coverage are up at ValpoAthletics.com. Live stats will also be available.