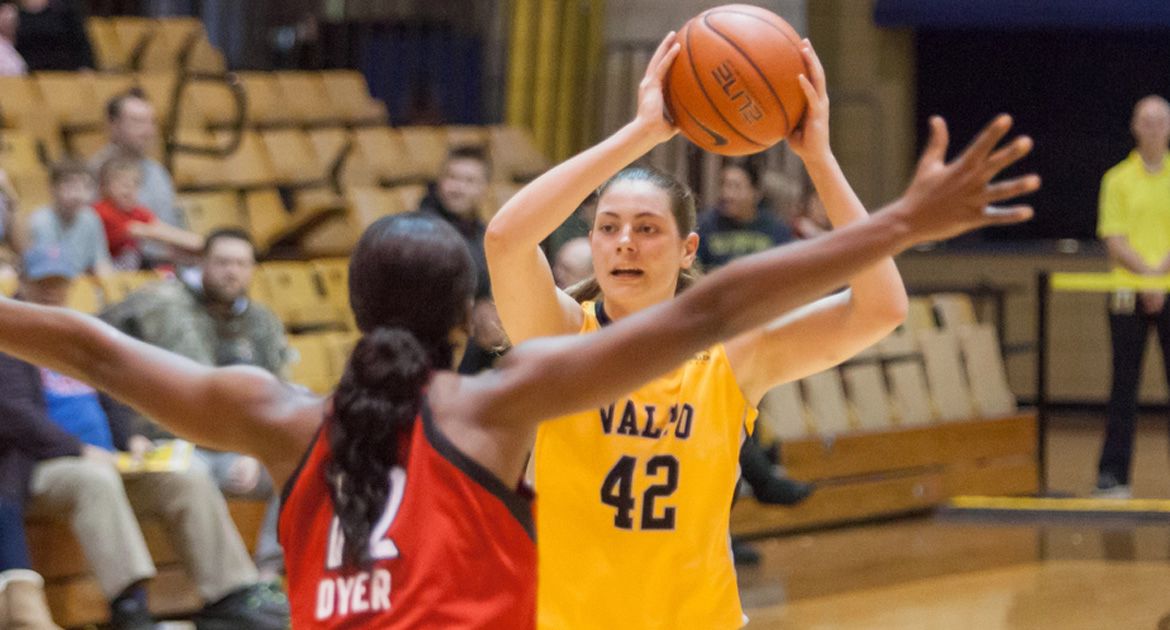 The opening five minutes yielded no hint of the hard-fought tilt that transpired over the next 55 minutes.

Jasmyn Walker (Muskegon, Mich./Mona Shores) tossed in four of her 12 points as part of a 10-0 game-opening surge. Valpo's defense kept the Wolves off the scoreboard until just after the midway part of the first stanza. As was the theme all night, Cardinal Stritch refused to go quietly. The Wolves responded to the ten-point hole with an 8-0 run of their own.

Walker beat the first-quarter buzzer with a three from the point to open a 14-8 home team lead.

With a little under four minutes to play in the second quarter, Stritch's Maranda Huibregtse recorded a putback layup to cap off a 7-0 run that temporarily gave the visitors a one-point edge. Thompson and Wolves guard Haley Ream traded field goals in the latter stages of the period before Hannah Schaub (Brooklyn Park, Minn./Park Center) canned a triple in the final minute to give the Crusaders a 27-25 halftime lead.

Valpo appeared to be on its way to a comfortable victory after expanding its lead to 13 points in the third quarter.

However, Cardinal Stritch found its second wind early on in the final quarter. The Wolves parlayed an 11-0 surge to make it a 55-53 tilt with 5:39 remaining in regulation.

It remained a one-possession contest over the final five minutes.

Thompson registered her final two points of the evening at the 3:43 mark to nudge the Brown and Gold ahead 60-58.

With the Crusaders' advantage at 61-58 a minute-and-a-half later, Cardinal Stritch's Mika Passini knocked down a pair of free throws. Walker put Valpo back ahead by three following another strong take to the basket in crunch time.

The Wolves logged 15 second-chance points Monday night, and Kelli Schrauth had two crucial ones with 38 seconds left. Schrauth laid one in following a Huibretgse offensive board seven seconds prior.

Valpo took possession of the ball with 38 seconds to go and burned a huge chunk of the clock. With the shot clock approaching zero, Lexi Miller (Caledonia, Mich./Caledonia) drove into the lane, but her shot attempt was blocked by Passini. With two timeouts and the ball, Cardinal Stritch was able to prepare for a final play on the offensive end of the court.

Fortunately for the Crusaders, Valpo had committed just one team foul heading into the final seven seconds. Dani Franklin (Cedar Rapids, Iowa/George Washington) and Abby Dean (Carmel, Ind./Carmel) both used a foul before the Wolves could construct a good look at the basket.

Jenny Shernell's desperation fling with under a second to go fell wide, and Valpo held on for a 63-62 triumph.

Valpo (1-6) will turn around and face Akron (3-4) Wednesday night at the Athletics-Recreation Center. Tipoff is slated for 7:00 pm CT. Links to the audio, video, and live stats are up at ValpoAthletics.com.