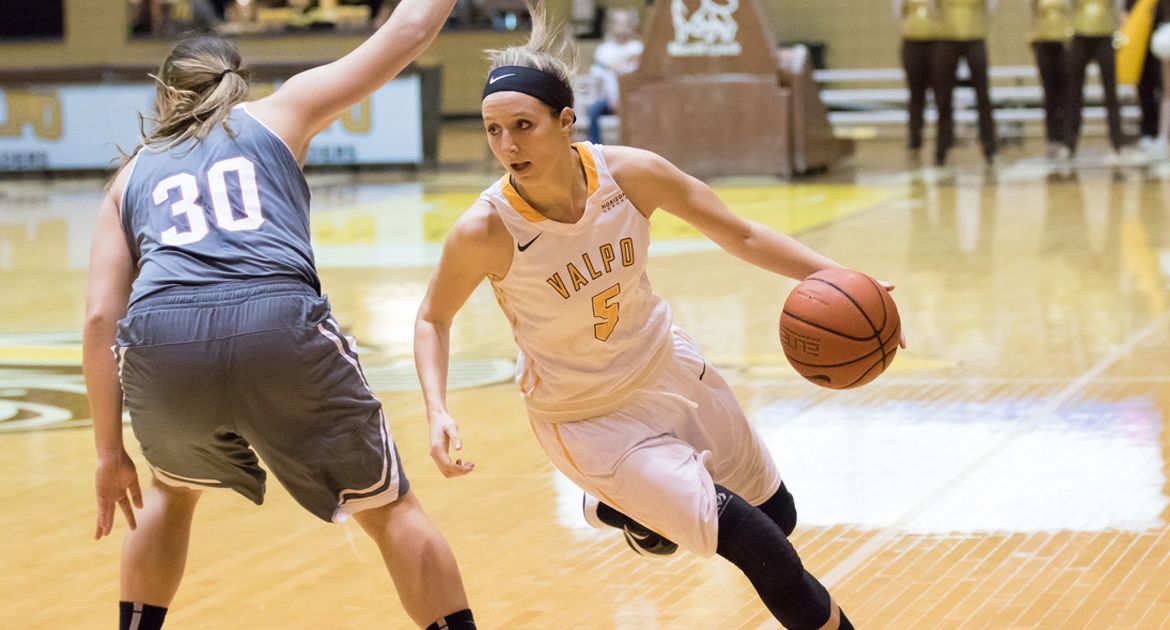 Abby Dean scored 15 points and grabbed eight rebounds - a career watermark for the senior - in a 69-56 win over SIU-Edwardsville on Saturday. (Ian Olive)
SIU-Edwardsville at Valpo | December 19, 2015

One of Valpo's best defensive efforts of the calendar year resulted in a 69-56 win over visiting SIU-Edwardsville Saturday afternoon at the Athletics-Recreation Center.

In addition to a season-high 15 points, Dean squeezed a career-best eight boards. Valpo enjoyed a 50-31 rebounding margin, its deepest surplus since outboarding Purdue Calumet by 27 on December 30th, 2014.

The Brown and Gold spotted SIUE ten points out of the gate. The Cougars' Sydney Bauman knocked down an eight-footer to cap the 10-0 game-opening surge.

Franklin put an end to that with a layup on a nice feed from Lexi Miller (Caledonia, Mich./Caledonia). The sophomore posted five first-quarter points as the Crusaders cut the deficit to seven points after the opening period.

Five different Crusaders recorded points in the second quarter as SIUE's 10-point advantage vanished in favor of a 29-29 tie at the 2:30 mark. Fittingly, Amber Lindfors (Elk Grove Village, Ill./Elk Grove) connected on a pair of free throws with three seconds on the clock to give Valpo a 33-32 halftime lead. The Crusaders outscored the Cougars 12-2 in the paint in the second quarter.

Franklin was 5-for-5 from the floor in the first half. Her 12 points represented a game high at that juncture.

Valpo's lead ballooned to ten points at the completion of the third stanza. Imani Scott-Thompson (Akron, Ohio/Firestone [Dakota College at Bottineau]) knocked down a pair of treys in the midst of a 13-4 run.

SIU-Edwardsville was unable to make it a two-possession game down the stretch thanks in part to a staunch rebounding push from the Crusaders. The Cougars logged just five second-chance points the entire contest. SIUE did, however, snag 16 steals. Valpo committed 26 turnovers, its most since Notre Dame forced 32 back on November 23rd.

Shronda Butts led SIUE with 22 points, seven assists, and five rebounds. The Cougars connected on five of their ten first-half attempts from three-point range, but drew iron on all ten of their tries after halftime.

The 56 points surrendered is the fewest in a game by Valpo since allowing 50 to Northern Illinois in DeKalb last November.

The Crusaders (3-7) will shoot for their third straight win Monday evening. IU-Kokomo (4-7) visits the ARC for a 7:00 pm CT tilt. WVUR (95.1 FM, Valparaiso) and ESPN3 will carry the action while live stats will also be available. Links to all three are up at ValpoAthletics.com.