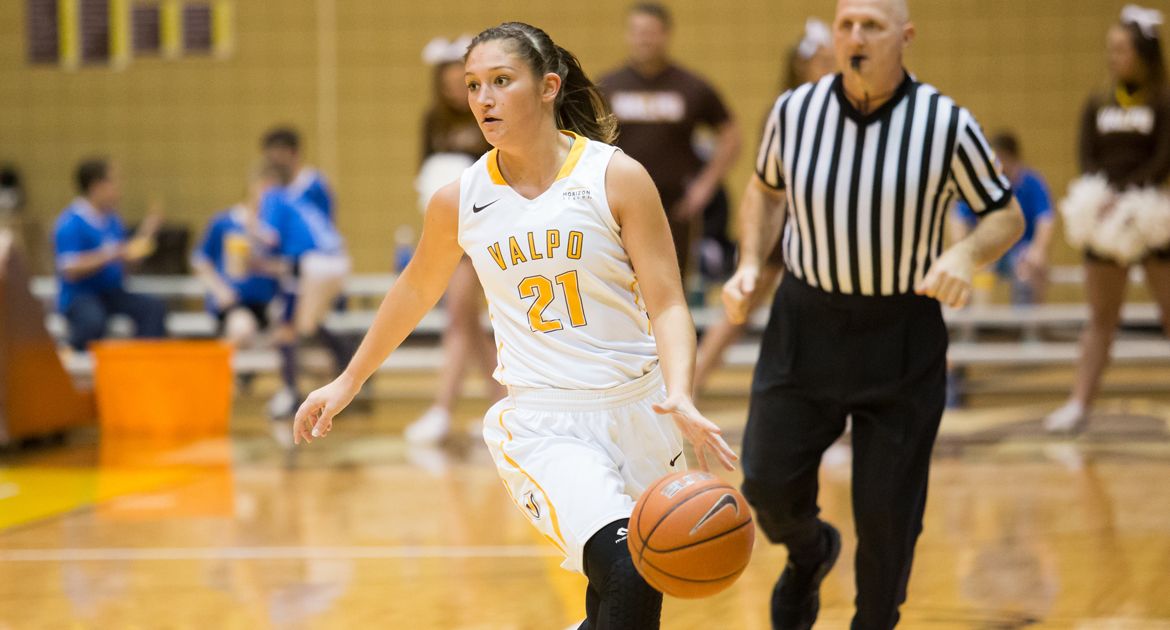 Senior Lexi Miller was 4-for-4 from the field with four assists last time out for the Crusaders. (Avery Davis)
Valpo at Northern Kentucky | December 30, 2015
Related Links
Related Links

Next Up in Crusader Basketball: Valpo’s 18-game Horizon League schedule gets underway Wednesday in the Bluegrass State. The opener signals not only the Brown and Gold’s maiden voyage to Highland Heights, but also the first-ever meeting between the Crusaders and Norse. Widely lauded as a premier mid-major facility, the 9,400-seat BB&T Arena will play host to its 20th - and final - NKU women’s basketball game of the 2015 calendar year.

Last Time Out: The Crusaders held IU-Kokomo to 8-of-65 shooting (12.3%) as the Brown and Gold collected an 88-22 victory Monday evening at the Athletics-Recreation Center. The 22 points yielded broke the previous school record of 28 versus Youngstown State back in 2010. Five players finished in double figures, including freshman Amber Lindfors who posted 15 points and 11 rebounds.

Following the Crusaders: Audio - WVUR (95.1 FM, Valparaiso) Brandon Vickrey (PxP), Jake Wulbert (Color). Video - ESPN3. Links for the audio, video, and live stats are available at ValpoAthletics.com. In addition, follow @ValpoWBB on Twitter for in-game updates and a behind-the-scenes look at the Crusaders throughout the season.

Head Coach Tracey Dorow: Tracey Dorow (27-75) is in her fourth season at the helm of the Valparaiso women’s basketball program in 2015-16. She collected her 250th career victory on November 14th, 2014 after a 91-57 defeat of Butler. In her first season, Dorow led the Crusaders to eleven victories overall, including five in Horizon League play. Dorow arrived in Valparaiso after 14 seasons at Ferris State. She compiled a 232-163 record while with the Bulldogs. Furthermore, Ferris State posted the #1 grade point average in all of Division II for the 1999-2000 women’s basketball season as well as the #2 ranking in 2002-03.

Series Notes: Wednesday marks the inaugural showdown between Valpo and Northern Kentucky. This is NKU’s first season in the Horizon League after spending the previous three years in the Atlantic Sun Conference. Northern Kentucky graduated from Division II to Division I in 2012.

Storylines
- Tracey Dorow and Northern Kentucky head coach Dawn Plitzuweit battled each other for five years while bench bosses at Ferris State and Grand Valley State, respectively.
- A victory would give the Crusaders their first four-game winning streak since the 2007-2008 season.
- Valpo visited the state of Kentucky just once in program history entering this season. Wednesday marks its second trip within 25 days.
- NKU’s Christine and Courtney Roush represent the fourth pair of sisters to oppose the Brown and Gold already this season.

@NKUNorseWBB
- @NKUNorseWBB enters Wednesday’s affair with an 8-3 record.
- @NKUNorseWBB is in the middle of a seven-game homestand.
- @NKUNorseWBB opens the 2015-16 season with ten of its first 13 tilts at the BB&T Center (8-3 record through 11 games).
- @NKUNorseWBB has traveled more than 40 miles just once this season (at Robert Morris [Pa.]). Their other road games were at Miami (Ohio) and Cincinnati.
- @NKUNorseWBB has attempted 233 three-point field goals (21.2 per game).
- @NKUNorseWBB’s average home attendance is 1,462, second-highest in the Horizon League.
- Christine Roush leads @NKUNorseWBB with 16.7 PPG (3rd in HL).
- Roush has tallied 12 or more points in all but one game this season.
- The senior has drained a HL-most 30 treys on just 66 attempts (45.5%) while converting 28 of 30 free-throw tries (93.3%).
- @NKUNorseWBB’s Rebecca Lyttle has assembled a Jasmyn Walker-like first season with the Norse (13.1 PPG, 9.4 RPG).
- Lyttle sat out 2014-15 after transferring from Michigan.
- Kasey Uetrecht leads @NKUNorseWBB in the steals department with 21 in addition to averaging 10.8 points per game.
- Uetrecht is three for her last 19 from beyond the arc.
- @NKUNorseWBB’s Rianna Gayheart’s 35:17 assist-to-turnover ratio is the fourth-best in the Horizon League.
- After transferring from Youngstown State following the 2012-13 season, Shar’Rae Davis is averaging 6.0 points and 4.1 rebounds in 18 minutes for @NKUNorseWBB.

Annemarie Hamlet
- Has not appeared in any of the first eleven games of the season.

Lexi Miller
- One of two Crusaders (Franklin) to possess a positive +/- rating (+6).
- Connected on 11 of her last 20 FG attempts (55%) since Dec. 7th.
- Has logged multiple assists in eight of her last nine games played.
- Finished in double figures eight times last season, including a career-high 21 points at Milwaukee on Jan. 21st.

Amber Lindfors
- Leads the Horizon League in blocks per game (2.3).
- Swatted six shots on two different occasions this year.
- Six blocks shy of cracking Valpo’s top 10 for rejections in a season.
- Amassed more blocks through ten games (22) than any Crusader in an entire season over the past eight years.
- At 6’4’’, she is the tallest Crusader since Stefanie Lang (2010-12).

Dani Franklin
- Has scored in double figures in four straight tilts.
- Her 1.18 +-/40 rating is highest on the team.
- Named to Preseason All-Horizon League Second Team.
- Led Valpo in scoring last Wednesday for the first time this season with 18 points. She did so 12 times last season.
- Needs 17 points Wednesday to raise her season average to 10.0 PPG.
- Reigning Horizon League Freshman of the Year and Sixth Player of the Year.
- Valpo’s top scorer (13.0 PPG) and field-goal shooter (47.3%) last season.
- Finished in double figures 21 times last season including five tilts of 20 points or more.
- Shot a team-high 85.7% (42-49) from the foul line as a freshman.

Allison Schofield
- Scored five points in Valpo’s 88-22 win over IU-Kokomo (Dec. 21).
- Made her first appearance in a Crusader uniform in the season opener at Butler.
- Helped lead her AAU team, Indiana Blizzard, to a national championship.

Jasmyn Walker
- Valpo’s leading scorer (11.6 PPG) and rebounder (7.8 RPG).
- Has two double-doubles on the season (13 pts, 13 rebs vs. Northern Colorado; 11 pts, 11 rebs vs. Miami [Ohio]).
- Picked up right where she left off in the season debut, collecting eight rebounds and two blocks to go with 13 points.
- Has started all 41 games since arriving to Valparaiso.
- Recorded most rebounds ever by a freshman (250) and the sixth-most ever in a single season in program history.
- Amassed nine double-doubles in Horizon League play in 2014-15.
- Elected to 2014-15 Horizon League All-Freshmen Team.
- Named HL Freshman of the Week three times last season.
- Collected team watermark in rebounds in 14 contests.

Haylee Thompson
- Averaging 7.4 points and 5.0 rebounds in her last five games.
- Erupted for a career-high 16 points on 6-of-7 shooting in the Crusaders’ 63-62 win over Cardinal Stritch on Dec. 7th.