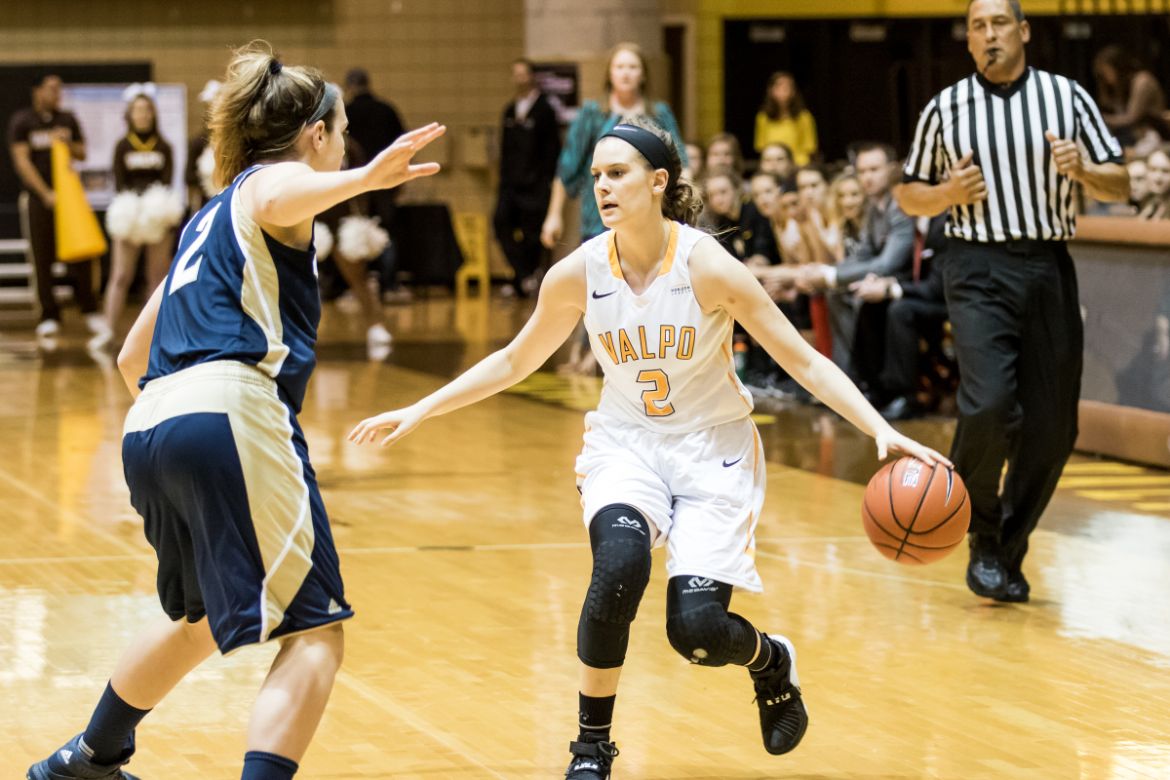 A shooting performance for the record books. A frenetic and furious final 1.4 seconds. Both episodes resulted in an unforgettable Horizon League debut at the BB&T Arena Wednesday night in Highland Heights, Kentucky.

Meredith Hamlet (McBain, Mich./McBain) penned her name into the Valpo record books after knocking down 10 of her 11 field goal attempts in a 61-60 victory. The 90.9% rate matched Marlous Nieuwveen's 10-for-11 night against Eastern Kentucky for the third-best shooting performance in program history. Hamlet's lone miss came on her final attempt.

The rookie stole the show from the get-go. Hamlet canned five treys as part of an 8-for-8 first-half shooting performance. It became evident in the second quarter that she was destined for a career night. After connecting on her first five tries, Hamlet looked to shoot at every touch. Defensively, NKU threw the kitchen sink at her, but the rookie was unfazed as she accounted for 21 of Valpo's 34 first-half points.

The tide turned NKU's way in the third quarter. Northern Kentucky erased an eight-point deficit in a matter of four minutes thanks to a 13-2 rush. Molly Franson's layup with 4:32 remaining in the stanza thrust the Norse ahead, 42-41. Valpo wrestled back a one-point lead after Dani Franklin (Cedar Rapids, Iowa/George Washington) beat the buzzer with a jumper from the elbow.

A tilt that saw 15 lead changes through the first three quarters somehow saw none during a final stanza filled with pandemonium and drama.

The Crusader lead was as large as six following Hamlet's final field goal - a layup - with 1:45 to play. Christine Roush answered right away with a layup on the other end to cut the edge to four.

Valpo killed 30 seconds off the clock before Hamlet fired off her only miss of the evening, but Franklin corralled the offensive board, allowing more valuable time to elapse.

NKU's Kasey Uetrecht snagged a steal with 40 seconds on the clock, and dropped in a layup ten seconds later. The Norse rattled off three quick fouls to move into the bonus. Their fifth offense sent Hamlet to the line for a pair. She missed the front-end, but sank the latter to push the advantage to 61-58.

Northern Kentucky took possession of the ball with 18 seconds left. The Norse took 14 of those seconds to get a shot off - another layup by Uetrecht to make it a one-point game with 4.8 seconds to go.

The subsequent inbound play went awry as the ball rolled towards the opposite sideline. Franklin dove for the ball in the middle of what became a mad chase. With the clock ticking down, the horn sounded, but official Mark Berger signaled a foul on Franklin. The three referees huddled, conferred, and then consulted with the replay monitor.

It was determined that Franklin was indeed guilty of a player control foul, an infraction that, by rule, does not result in free throws for the offended player. Much to the disapproval of the 1,127 in attendance, Northern Kentucky was awarded the ball - not foul shots - with 1.4 seconds put back on the clock.

The Norse ran a perfectly-executed play to get Lyttle an open look at the basket. The redshirt junior secured the ball under the hoop, but her layup rattled out to give the Crusaders their first victory in a Horizon League road opener.

Senior Abby Dean (Carmel, Ind./Carmel) recorded six points, but four of them came in critical junctures in the fourth quarter. Walker finished with eight points and ten rebounds. Franklin dropped in 10 points as she moved her streak of posting double-digit points to five games.

Valpo prevailed despite a 22-14 foul margin. The Norse, the Horizon League leader in free-throw shooting, made 18 of their 24 tries from the charity stripe. The Brown and Gold attempted just seven foul shots.

Northern Kentucky was held to 60 points, its fewest offensive output yet this season. The Norse entered Wednesday evening averaging 78.9 points per game, the third-highest rate in the Horizon League.