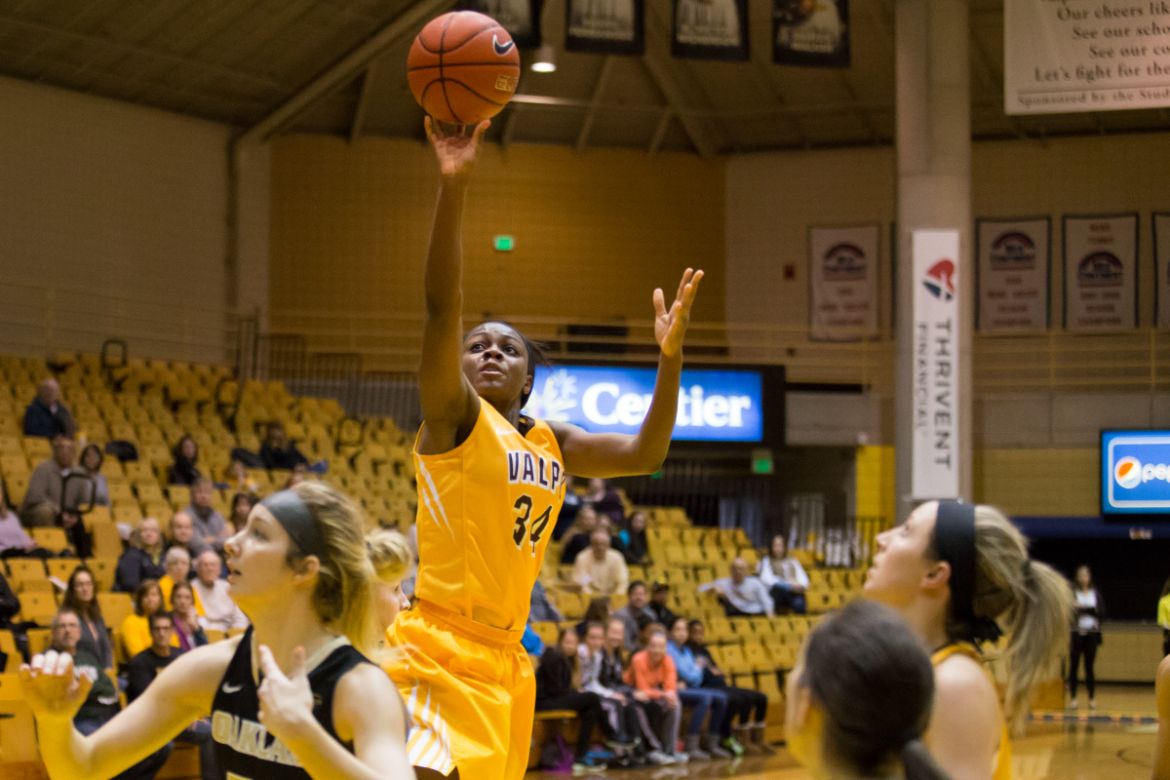 Jasmyn Walker went off for a career-high 23 points and 14 boards in a 81-66 win over Oakland on Saturday. (Avery Davis)
Oakland at Valpo | January 09, 2016
Related Links
Related Links 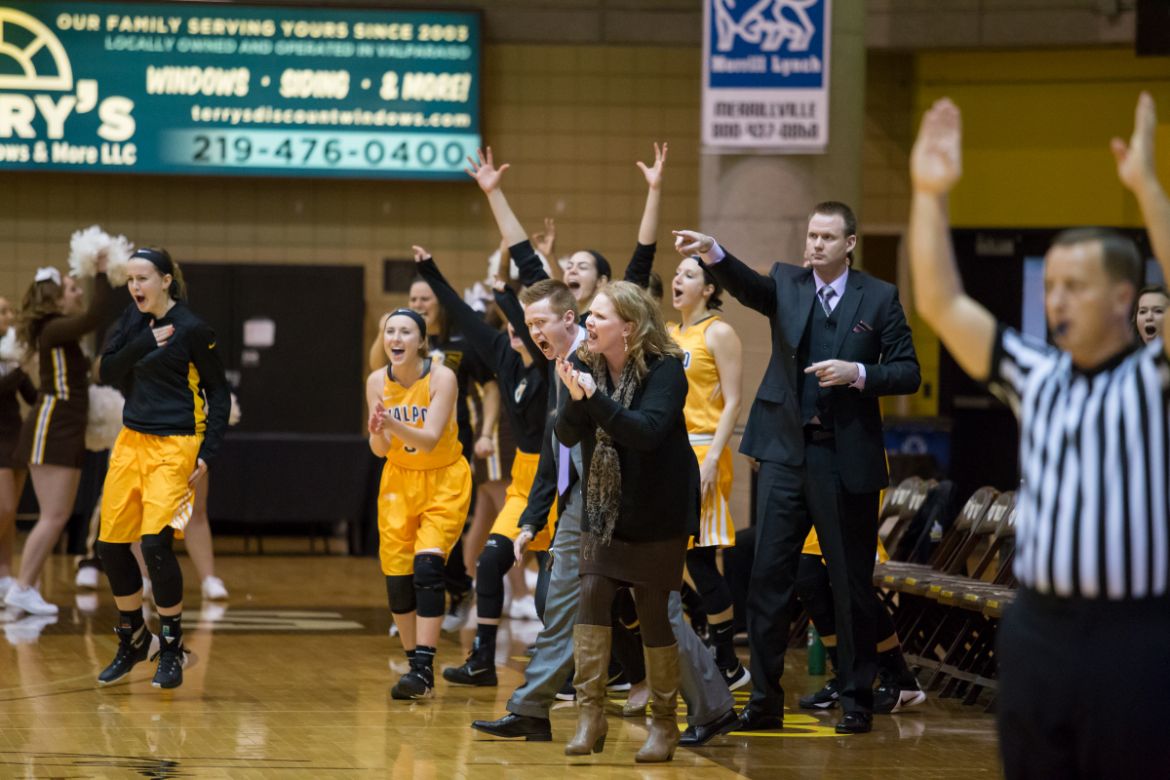 A fiery forty minutes of basketball translated into a signature 81-66 win for the Crusaders Saturday afternoon at the Athletics-Recreation Center. Sophomores Jasmyn Walker (Muskegon, Mich./Mona Shores) and Dani Franklin (Cedar Rapids, Iowa/George Washington) combined for 40 points for the second straight Saturday while freshman Meredith Hamlet (McBain, Mich./McBain) finished in double figures for the seventh time in her last eight contests in a convincing victory over the 10-win Oakland Golden Grizzlies.

The Brown and Gold dictated the pace from tip to buzzer. Valpo raced out to a 10-2 lead after scoring on its first four possessions. Freshman Amber Lindfors (Elk Grove Village, Ill./Elk Grove), who returned to the Crusader lineup for the first time since December 30th, scored all four of her points in the first three-and-a-half minutes. She added nine rebounds, a block, and a steal to her stat sheet.

Walker, Franklin, and Hamlet combined for 14 straight points in the opening stanza as the Crusaders opened a comfortable 24-11 lead. Lexi Miller (Caledonia, Mich./Caledonia) and Imani Scott-Thompson (Akron, Ohio/Firestone [Dakota College at Bottineau]) put the finishing touches on an impressive first quarter that concluded with Valpo on top, 29-13.

Valpo never lifted its foot off the accelerator. Oakland's Taylor Gleason cut the margin to single digits at the 5:08 mark of the second quarter, but Abby Dean (Carmel, Ind./Carmel) responded 30 seconds later with a trey from the wing. Hamlet and Franklin later splashed threes on back-to-back trips down the court to pillow its lead to 42-27. The Crusaders nailed eight of their 12 attempts from three-point range in the first twenty minutes - their most efficient half of the season - to take a 44-29 edge into the break.

Walker and Franklin both nudged their way into double figures by the time the halftime horn sounded.

As vigorously as the Crusader offense operated in the first half, their defense manufactured an equally eyebrow-raising effort.

Olivia Nash, who entered Saturday averaging 16.9 PPG thanks to the nation's 8th-highest field goal percentage (.619), was held scoreless until the 6:02 mark of the third quarter. Her first two points came 57 seconds after Valpo filed its largest of the lead of day at 20 points. While Nash ended the afternoon with a team-high 17 points and 11 rebounds, her production came when the hole was too deep for the Golden Grizzlies.

The Brown and Gold's double-digit cushion never deflated in the second half. Walker added 11 points after halftime to finish with a career-high 23 points. Her 14 boards represented her second double-double in as many games and her fourth of the season. A career-best five assists got lost in the gaudy point and rebound sums. Walker amassed 35 points and 30 rebounds versus Detroit and Oakland this week. She'll take the court Thursday at Green Bay eight points shy of 500 for her 45-game career.

The triumph matched Valpo (6-9, 2-2 Horizon)'s output in wins in each of the last two seasons. It also represented the fastest the Crusaders have notched their sixth win since the 2008-09 season. The perennial stalwart Green Bay Phoenix (13-2, 3-0 Horizon) welcome Valpo to the Kress Events Center next Thursday at 7 pm CT. Links to the audio, video, and live stats will be available at ValpoAthletics.com.