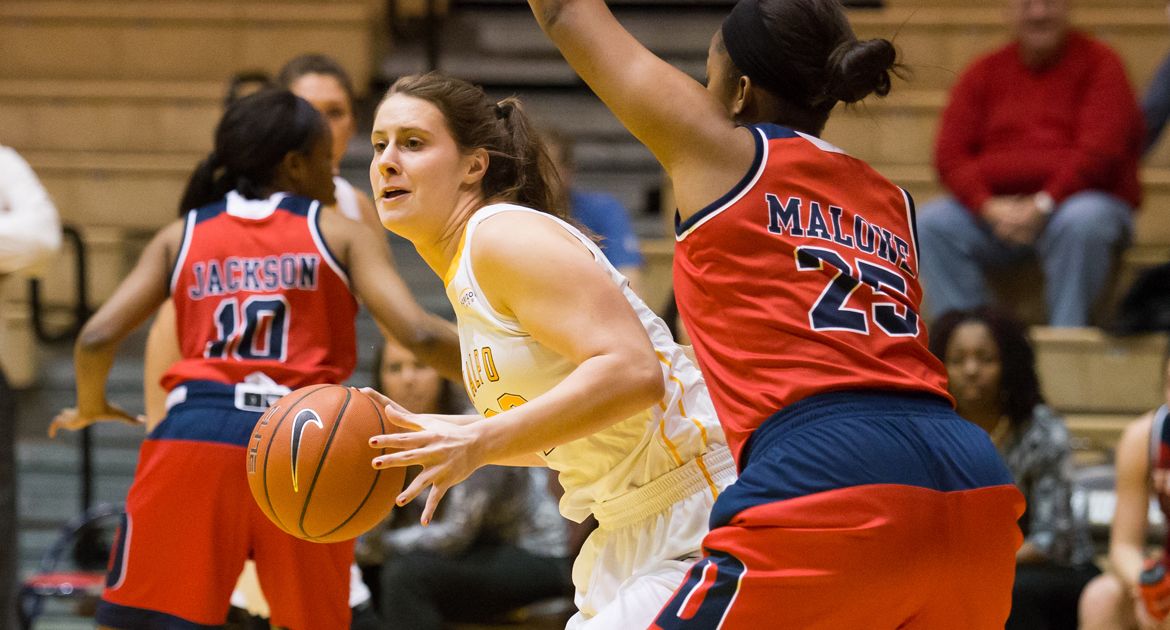 Next Up in Crusader Basketball: The Valpo women’s basketball team returns to the road Thursday evening to begin its trek through Wisconsin. The first-place Green Bay Phoenix await the Crusaders inside the ever-boisterous Kress Events Center. The Phoenix, who received five votes in Tuesday’s USA Today Coaches Poll, aim to extend their winning streak to eleven while the Brown and Gold target their first win at Green Bay in nearly 25 years.

Last Time Out: A fiery forty minutes of basketball translated into a signature 81-66 win for the Crusaders Saturday afternoon at the Athletics-Recreation Center. Sophomores Jasmyn Walker and Dani Franklin combined for 40 points for the second straight Saturday while freshman Meredith Hamlet finished in double figures for the seventh time in her last eight contests in a convincing victory over the 10-win Oakland Golden Grizzlies.

Following the Crusaders: Audio: UStream - Brandon Vickrey (PxP), Parker Gatewood (Color). Video: ESPN3 - Bill Scott (PxP), Cordero Barkley (Color). Links for the audio, video, and live stats are available at ValpoAthletics.com. In addition, follow @ValpoWBB on Twitter for in-game updates and a behind-the-scenes look at the Crusaders throughout the season.

Head Coach Tracey Dorow: Tracey Dorow (29-77) is in her fourth season at the helm of the Valparaiso women’s basketball program in 2015-16. She collected her 250th career victory on November 14th, 2014 after a 91-57 defeat of Butler. In her first season, Dorow led the Crusaders to eleven victories overall, including five in Horizon League play. Dorow arrived in Valparaiso after 14 seasons at Ferris State. She compiled a 232-163 record while with the Bulldogs. Furthermore, Ferris State posted the #1 grade point average in all of Division II for the 1999-2000 women’s basketball season as well as the #2 ranking in 2002-03.

Series Notes: Green Bay leads the all-time series, 33-4. The Phoenix are in the midst of a 19-game winning streak that began in February of 2008. Valpo is 2-18 all-time versus Green Bay away from the ARC. The Phoenix recorded a 67-52 victory over the Crusaders last January in Valparaiso before downing the Brown and Gold, 87-45, at Kress Events Center.

Kevin Borseth
- Kevin Borseth is in the fourth season of his second run as head coach of the Phoenix.
- Borseth, who is in his 29th season as a head coach, enters Thursday’s matchup with a 620-252 overall record.
- Borseth is 308-82 as bench boss of the Phoenix, including a 172-17 mark in Horizon League play.
- Borseth is closing in on his 21st consecutive winning season.
- Borseth ran the show at Green Bay from 1998-2007 before taking over the reins at University of Michigan.
- Borseth spent five seasons in Ann Arbor where he assembled a 87-73 record with the Lady Wolverines.
- Borseth guided Michigan to three WNIT berths (2007-08, 2009-2011) and an NCAA Tournament appearance (2011-12) in five years.
- Borseth returned to the Green Bay sidelines immediately following the 2011-12 season.
- Borseth has been named the Horizon League Coach of the Year seven times, most recently in 2007.
- Before arriving in Wisconsin, Borseth accumulated a 225-97 (.699) record in 11 seasons (1987-98) as head coach of Division II Michigan Tech.
- Borseth owns a 2-8 record in the NCAA Tournament (Division I).

Abby Dean
- Played in her 100th game for the Crusaders Saturday vs. Oakland.
- Logged the most minutes (2,138) of any Crusader on the roster.
- Has already surpassed her 2014-15 steals total of 13.
- Has shot over 80% from the charity stripe and started 27 games each of the last two seasons.

Annemarie Hamlet
- Has not appeared in any of the first fifteen games of the season.

Georgi Donchetz
- Obtained her career high of nine points vs. Green Bay last January.
- Spent much of her rookie campaign rehabbing from a knee injury.

Lexi Miller
- One of two Crusaders to possess a positive plus-minus rating for the entire season (+14).
- Five dimes shy of 200 for her career at Valpo.
- Tied a career high in assists (8) at Wright State on Jan. 1st.
- Finished in double figures eight times last season, including a career-high 21 points at Milwaukee on Jan. 21st.

Amber Lindfors
- Leads the Horizon League in blocks per game (2.0).
- Swatted six shots on two different occasions this year.
- Five blocks shy of cracking Valpo’s top 10 for rejections in a season.
- Amassed more blocks through ten games (22) than any Crusader in an entire season over the past eight years.
- At 6’4’’, she is the tallest Crusader since Stefanie Lang (2010-12).

Dani Franklin
- Leads the Crusaders in HL play with 16.8 points/game.
- After shooting 50% or higher from the field just once in the first six games of the season, Franklin has done so in each of her last nine.
- Eclipsed the 500-point mark for her career in her 42nd game (1/7/16).
- Leads Valpo in +-/40 at +2.65.
- Named to Preseason All-Horizon League Second Team.
- Led Valpo in scoring against Miami (Ohio) for the first time this season with 18 points. She did so 12 times last season.
- Reigning Horizon League Freshman of the Year and Sixth Player of the Year.
- Valpo’s top scorer (13.0 PPG) and field-goal shooter (47.3%) last season.
- Finished in double figures 21 times last season including five tilts of 20 points or more.
- Shot a team-high 85.7% (42-49) from the foul line as a freshman.

Jasmyn Walker
- Valpo’s leading scorer (12.7 PPG) and rebounder (8.8 RPG).
- Established career highs in points (23), field goals made (9), 3-pointers made (2), and assists (5) last time out versus Oakland.
- Cradled a career-high 16 rebounds last Thursday vs. Detroit.
- Tallied, or tied for the team lead, in rebounds 10 times this season.
- Posted four double-doubles this season, including two straight.
- Has started all 45 games since arriving to Valparaiso.
- Recorded most rebounds ever by a freshman (250) and the sixth-most ever in a single season in program history.
- Amassed nine double-doubles in Horizon League play in 2014-15.
- Elected to 2014-15 Horizon League All-Freshmen Team.
- Named HL Freshman of the Week three times last season.
- Collected team watermark in rebounds in 14 contests a season ago.

Haylee Thompson
- Received two straight starting assignments.
- Posted for a career-high 16 points on 6-of-7 shooting in the Crusaders’ 63-62 win over Cardinal Stritch on Dec. 7th.