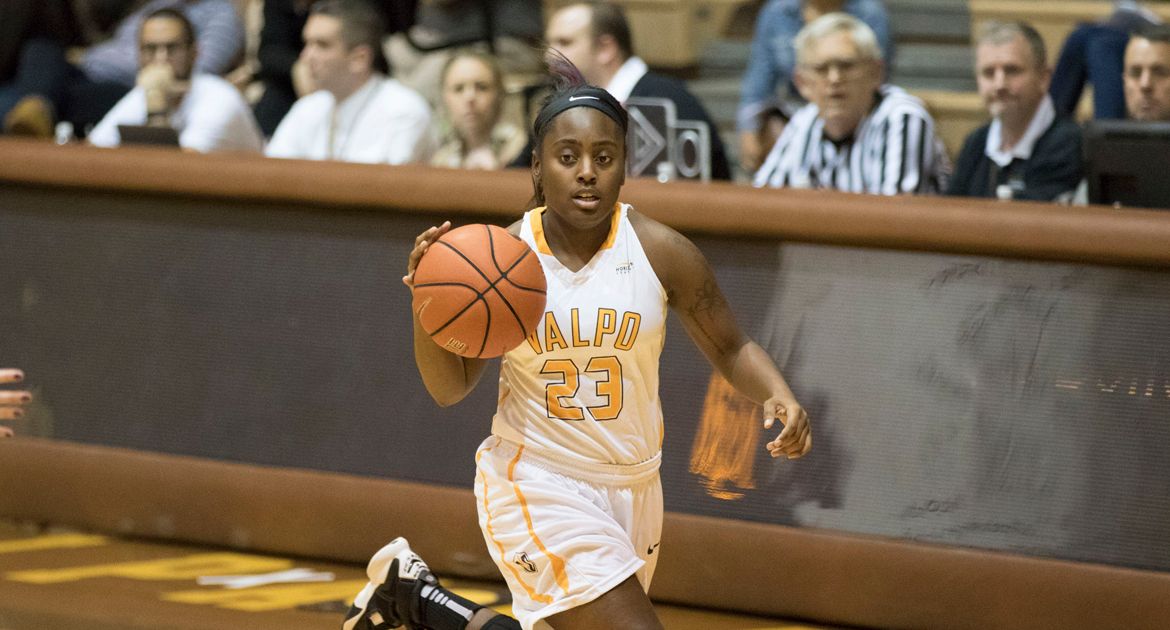 Scott-Thompson finished with 14 points (5-10 FG, 4-8 3FG) to amend her season highs in points, field goals made, and three-pointers. However, the overwhelming factor in the 81-42 defeat to the Phoenix revealed itself in the turnover column. Green Bay coerced 23 Crusader turnovers, their most since Dec. 19th. Jasmyn Walker (Muskegon, Mich./Mona Shores) gathered nine rebounds, but managed just five shot attempts.

Walker gave the Crusaders a 3-0 lead on the opening possession with a three from the point. Meredith Hamlet (McBain, Mich./McBain) appeared to double that margin with a triple of her own, but the freshman was whistled for traveling before the ball found the bottom of the net. The miscue signaled the first of six consecutive for the Brown and Gold.

Kaili Lukan, Allie LeClaire, and Mehryn Kraker helped the Phoenix to a 7-3 lead while their defense caused all sorts of havoc on the Valpo end. Scott-Thompson stiff-armed the surge with her first trey of the night just ahead of the first media timeout. Green Bay outscored the Crusaders, 8-3, the rest of the period. All three of Valpo's points came from the foul line, and the Phoenix possessed a 15-9 lead after ten minutes.

Green Bay utilized an 11-2 quarter-opening run to create a comfortable cushion before halftime. Scott-Thompson had five points in the second stanza, but the Brown and Gold generated little elsewhere. After receiving her second foul at the 3:24 mark of the first quarter, Dani Franklin (Cedar Rapids, Iowa/George Washington) was relegated to the bench for much of the rest of the first half.

The Crusaders trailed 36-20 at halftime. Scott-Thompson had eight at the break on 3-of-5 shooting.

Green Bay's hallmark defense failed to diminish in the second half. The Phoenix forced 11 turnovers over the final two periods, one fewer than in the first half. Scott-Thompson added six second-half points while freshman Allison Schofield (McCordsville, Ind./Heritage Christian) chipped in five.

The Phoenix cruised to their eleventh consecutive victory and the 39th in their last 40 Horizon League affairs.

Kraker and Lukan led the way for the Phoenix with 15 and 12 points, respectively.

Valpo (6-10, 2-3 Horizon) will close out the week Saturday afternoon at the Klotsche Center versus Milwaukee. The Panthers (8-7, 2-2 Horizon) are coming off a compelling 54-53 victory over visiting UIC. Tipoff is slated for 2:00 pm CT. Parker Gatewood and Brandon Vickrey will have the call on WVUR (95.1 FM, Valparaiso). Links to the audio, ESPN3, and live stats feeds are all posted at ValpoAthletics.com.