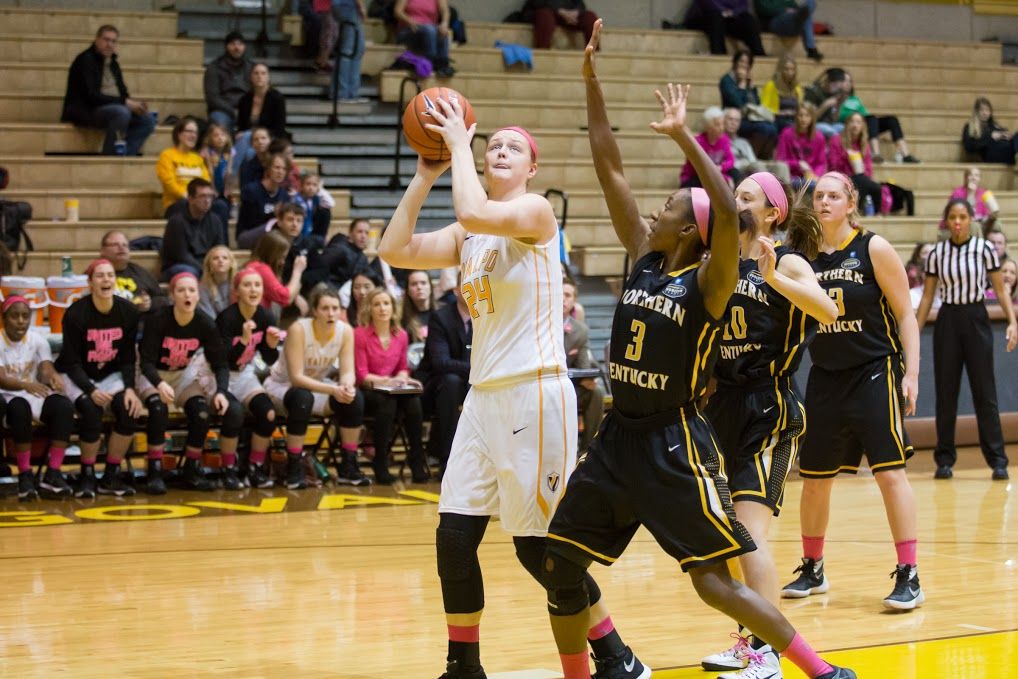 Jasmyn Walker (Muskegon, Mich./Mona Shores) tallied a team-high 12 points, but Northern Kentucky received 31 points from the Roush sisters in a 68-50 win over the Brown and Gold Saturday afternoon at the Athletics-Recreation Center.

Valpo found itself in a 10-5 hole early, but an Abby Dean (Carmel, Ind./Carmel) drive followed by a Meredith Hamlet (McBain, Mich./McBain) triple from the corner knotted the game at 10-10. The Norse responded with a 5-0 spurt of their own, though, to take a 15-10 first quarter lead. Northern Kentucky helped itself on the boards, parlaying seven offensive rebounds into 11 second-chance points in the opening period.

Northern Kentucky maintained a single-digit lead for the entire second quarter. The Crusaders came within two points three different times, but never brought the game to a tie. Valpo was held scoreless for the final 3:15 of both the first and second quarters. The Brown and Gold trailed 30-24 at the break. Christine Roush and Kasey Uetrecht each tossed in eight points to lead Northern Kentucky at halftime.

NKU connected on five of its 22 three-point attempts in the first half. The 22 tries from beyond the arc matched Valpo's total attempts from the field in the opening twenty minutes.

The visitors opened the second half on a 16-0 run during a pivotal third quarter. Christine Roush had nine points in the period while Courtney added seven as NKU outscored the Crusaders, 27-7.

The margin peaked at 30 points, but Valpo recovered in the final quarter to save face. Walker scored seven of her 12 points in the fourth stanza as she reached double figures in scoring for the fifth consecutive contest.

For the third straight tilt, the Crusader offense was held under 55 points. Their struggles from beyond the arc continued Saturday as Valpo finished 4-of-22 from three-point range. For the weekend, the Crusaders managed just 15.2% (5-for-33) from the perimeter.

Freshman Amber Lindfors (Elk Grove Village, Ill./Elk Grove) added two blocks to her season total. The rookie is now in a tie for fourth-place all-time for most blocks in a season with Deb Lahti (46).