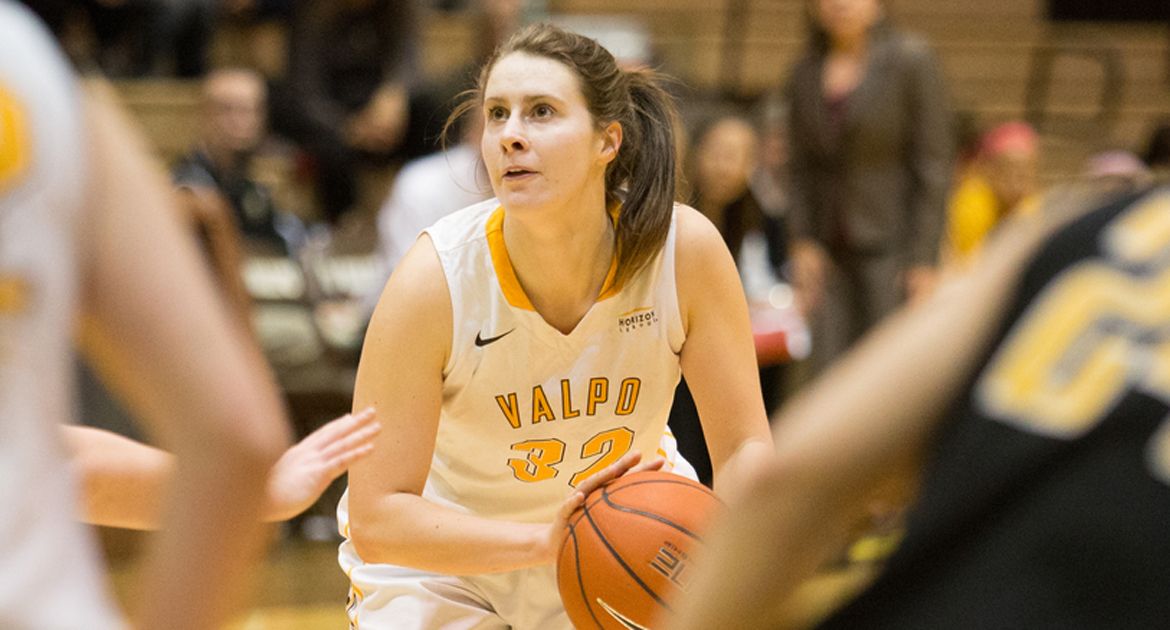 Dani Franklin (Cedar Rapids, Iowa/George Washington) and Meredith Hamlet (McBain, Mich./McBain) turned in record-setting offensive performances Thursday afternoon, but a turnover-laced first half made a late Crusader comeback attempt too tall of an order. The underclassmen combined for 47 points on 17-of-29 shooting, but Oakland prevailed in an 87-77 contest at the Athletics Center O'rena.

Oakland raced out to a 24-15 lead after a fast-paced first quarter. The Crusaders did a commendable job of keeping Olivia Nash off the stat sheet in the first half of their Jan. 9th meeting. However, she racked up nine points in the first four-and-a-half minutes of Thursday's affair. The Golden Grizzlies forced seven Crusader first-quarter turnovers.

The turnover epidemic wasn't quarantined to the opening period. Valpo committed another seven miscues in the second quarter, but three-point shooting kept the Crusaders in the ball game. Imani Scott-Thompson (Akron, Ohio/Firestone [Dakota College at Bottineau]) lit a fire under the Brown and Gold with back-to-back triples midway through the period. Her three-pointers capped an 8-0 Crusader run that answered a 9-0 Oakland surge.

Hamlet added two treys of her own as part of a 6-for-10 first-half three-point shooting performance. She led the Crusaders at the break with 10 points while Franklin chipped in seven. Jasmyn Walker (Muskegon, Mich./Mona Shores) nudged her way into Valpo's Top 20 for career rebounds with a defensive board at the 1:59 mark of the second period.

Oakland amassed a 48-34 halftime lead behind 19 points from Nash.

Valpo boosted its efficiency in the third quarter, churning out six assists opposite two turnovers. The Crusaders snipped the deficit to 11 points twice in the period, but the Grizz answered with two straight baskets in both instances. Taylor Jones registered Oakland's final 10 points of the quarter while Hamlet canned three more triples.

Trailing 66-53 entering the fourth quarter, the focus sharpened for the Brown and Gold. A margin that peaked at 21 points dipped to as few as four thanks to a 13-4 run. But just as Valpo was beginning to contain Nash, Taylor Gleason rattled off nine straight Oakland points to re-establish a comfortable cushion.

Valpo was unable to come up with a defensive stop when it needed it most. Jones added four late points to seal the 87-77 win for the Grizz.

Franklin finished with 25 points, tying a career high for the sophomore. She also set season watermarks in field goals (9), and free-throws made (5). With Thursday's 9-for-15 shooting performance, Franklin boosted her field-goal percentage to .452.

Abby Dean (Carmel, Ind./Carmel) and Scott-Thompson both tallied nine points, and freshman Amber Lindfors (Elk Grove Village, Ill./Elk Grove) amassed eight rebounds to go with two blocks. With her next rejection, Lindfors will move into a tie for third place alongside Tamra Braun for most blocks in a season with 49.