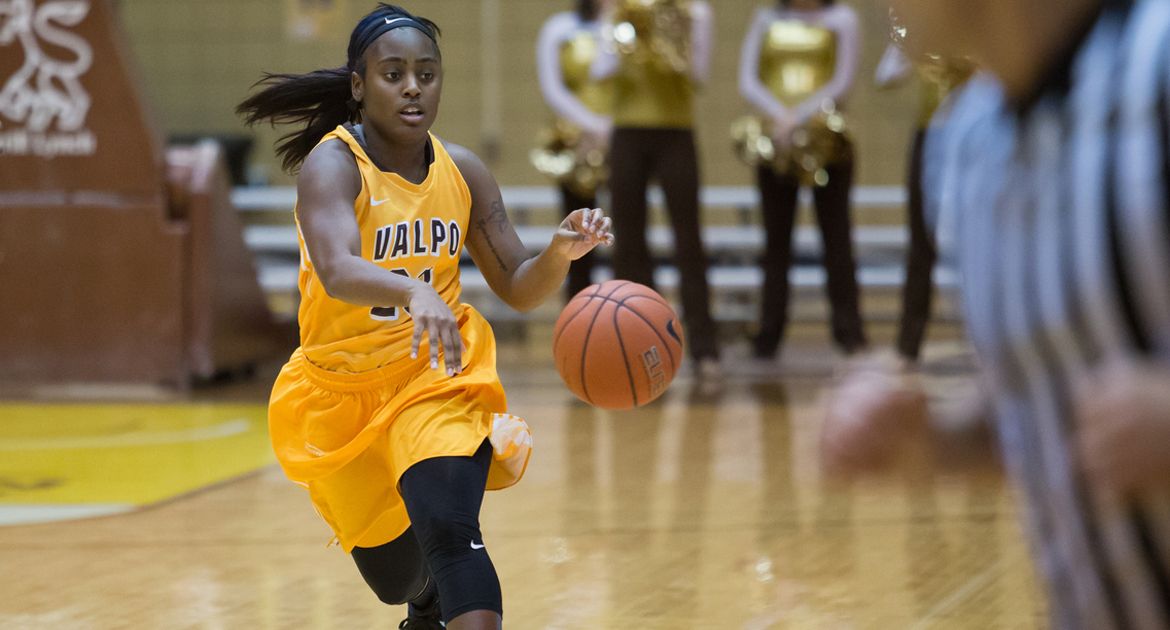 Milwaukee parlayed 19 Crusader turnovers into 23 points Thursday night as the Panthers recorded a 70-60 win at the Athletics-Recreation Center.

Milwaukee's Jenny Lindner and Steph Kostowicz got the Panthers out to a 15-10 lead with just under two minutes to play in the opening quarter. The Crusaders, however, assembled a 10-0 run over the next five minutes to obtain a 20-15 lead in the second stanza. An Abby Dean (Carmel, Ind./Carmel) fast break lay-in capped the surge and forced Milwaukee head coach Kyle Rechlicz to use a timeout.

UWM's Sierra Ford-Washington wasted no time knocking down a trey out of the huddle to slide the momentum back the visitor's way. Alexis Lindstrom sank a pair of triples in a two-minute span later in the period to allow the Panthers to recapture the lead. Lindner added another three-ball before the end of the first half as Milwaukee closed it on a 10-1 blitz.

The Crusaders struggled from the perimeter, landing just two of their 12 attempts from downtown. Their shooting ailments weren't quarantined to three-point range. Valpo connected on four of its nine first-half free-throw attempts.

Hannah Schaub (Brooklyn Park, Minn./Park Center) flipped the script on the Brown and Gold's opening possession of the second half. The freshman buried a three from the corner to draw the Crusaders to within four. However, UWM responded with another run - this one a 13-2 rush - to open a 15-point advantage. Facing its largest deficit of the night, Valpo began to chip away, thanks in large part to its bench.

Haylee Thompson (Hailey, Idaho/Wood River [Utah State]) scored all five of her points in a one-minute, 14-second window, and Scott-Thompson beat the buzzer with a three-pointer from the wing to move the Crusaders to within 48-42 with ten minutes remaining.

Valpo and Milwaukee traded field goals to open the fourth quarter before Scott-Thompson canned another triple to make it a one-possession game. The junior sank a jumper on the ensuing possession after Kostowicz missed a layup on the other end. With the Crusaders trailing 50-49 at the 7:40 mark of the final period, the Panthers used another run to force it back to a three-possession game.

Walker was able to cut it to a nine-point game with under two minutes to go, but that was as close as the Brown and Gold would get. She finished with 18 points and nine rebounds while Scott-Thompson ended one point off her season high with 13. Freshman Amber Lindfors (Elk Grove Village, Ill./Elk Grove) blocked two shots for the fourth consecutive tilt.

Kostowicz tossed in 27 points and fetched 12 boards. Lindner and Ford-Washington added 11 points each for the Panthers.

Valpo (8-17, 4-10 Horizon) will close out its home portion of the schedule Saturday afternoon versus Green Bay (22-3, 12-1 Horizon). The team will honor its three seniors - Dean, Lexi Miller (Caledonia, Mich./Caledonia), and Jessi Wiedemann (Palatine, Ill./Fremd) - prior to the 1:30 pm tip. Links to the WVUR and ESPN3 broadcasts, as well as the live stats, are posted at ValpoAthletics.com.