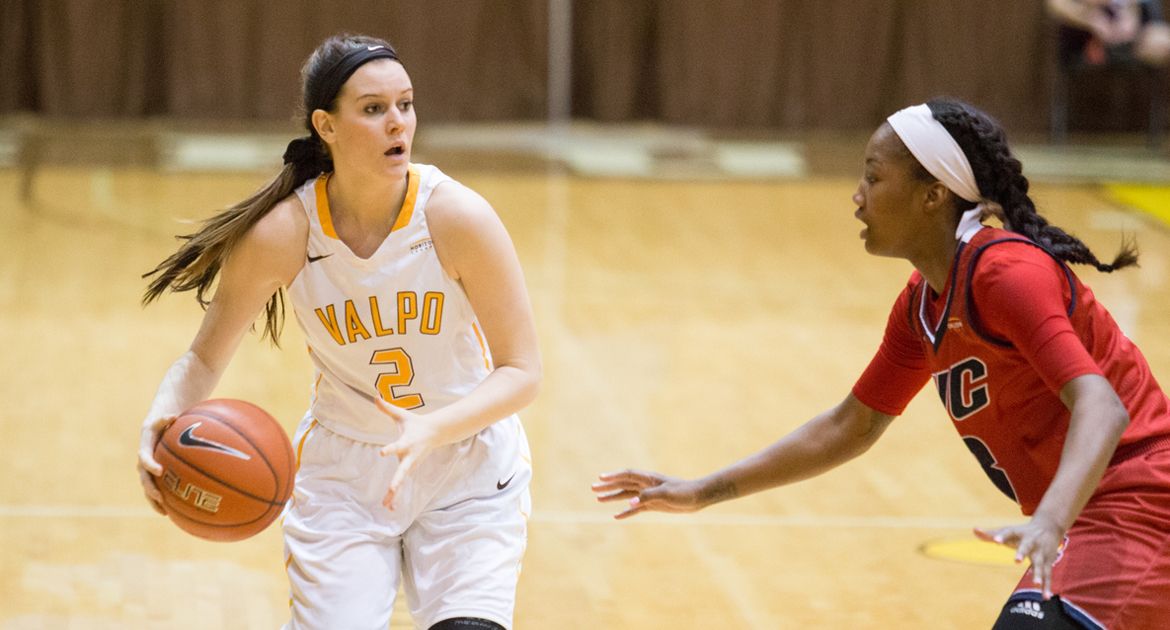 Freshman Meredith Hamlet finished in double figures for the 13th time this season Friday night at Youngstown State, but the Penguins shot 52.6% from the floor in an 87-66 win. (Avery Davis)
Valpo at Youngstown State | February 26, 2016

The Crusaders amassed 28 points in the fourth quarter of their game against Youngstown State on Friday evening, but it was too little, too late, as the Penguins shot 52.6% from the field in an 87-66 win over Valpo at Beeghly Center.

Both teams got off to sluggish starts, combining for five turnovers in the game's opening three minutes. Valpo led 4-1 at the 6:30 mark of the first before Youngstown State scored the next eight points to open a five-point advantage. Sarah Cash asserted herself in the post, helping the Penguin lead swell to 12 points before quarter's end. The sophomore had eight points as the home team led 20-10 after ten minutes. 12 of YSU's 20 points came in the paint.

Freshman Meredith Hamlet (McBain, Mich./McBain) drilled a pair of threes to help the Crusaders cut the deficit to as few as six points in the second quarter, but the Brown and Gold ended the half on a 5:19 scoring drought. Valpo had seven players score in the opening half, but Hamlet's six represented the team high.

It was Hamlet that brought an end to the offensive famine. The rookie canned her third triple of the night on a nice feed from Abby Dean (Carmel, Ind./Carmel) a minute into the second half. Valpo's shooting fortunes didn't improve until after Youngstown State had secured a comfortable, double-digit cushion. The Crusaders landed one of their seven field goal attempts to end a third quarter that saw Youngstown State's lead balloon to 22 points.

YSU took a 60-38 lead into the fourth quarter before the Crusaders exploded for 28 fourth-quarter points. The offensive output equaled their point totals from the second and third stanzas combined.

The Penguins prevailed 87-66 behind 21 points and 10 boards from Cash. Senior Janae Jackson and sophomore Nikki Arbanas pitched in 15 points each. Jackson was the lone senior recognized during Youngstown State's Senior Day. YSU seemingly couldn’t miss in the second half, recording a 15-for-24 (62.5%) shooting performance over the third and fourth quarters. Overall, 30 of their 57 field-goal attempts (52.6%) found the bottom of the basket.

Hamlet finished in double figures for the 13th time this season, leading Valpo with 13 points. The freshman was 3-for-6 from beyond the arc.

Jasmyn Walker (Muskegon, Mich./Mona Shores) scored six of her 10 points after the halftime intermission. She added six rebounds to her season total.

Sophomore Georgi Donchetz (Savage, Minn./Burnsville) had four points in her return to the Valpo lineup. Junior Imani Scott-Thompson (Akron, Ohio/Firestone [Dakota College at Bottineau]) splashed a three-pointer as part of a nine-point effort off the bench.

The Brown and Gold did shoot well at the foul line, connecting on 19 their 22 free-throw attempts.