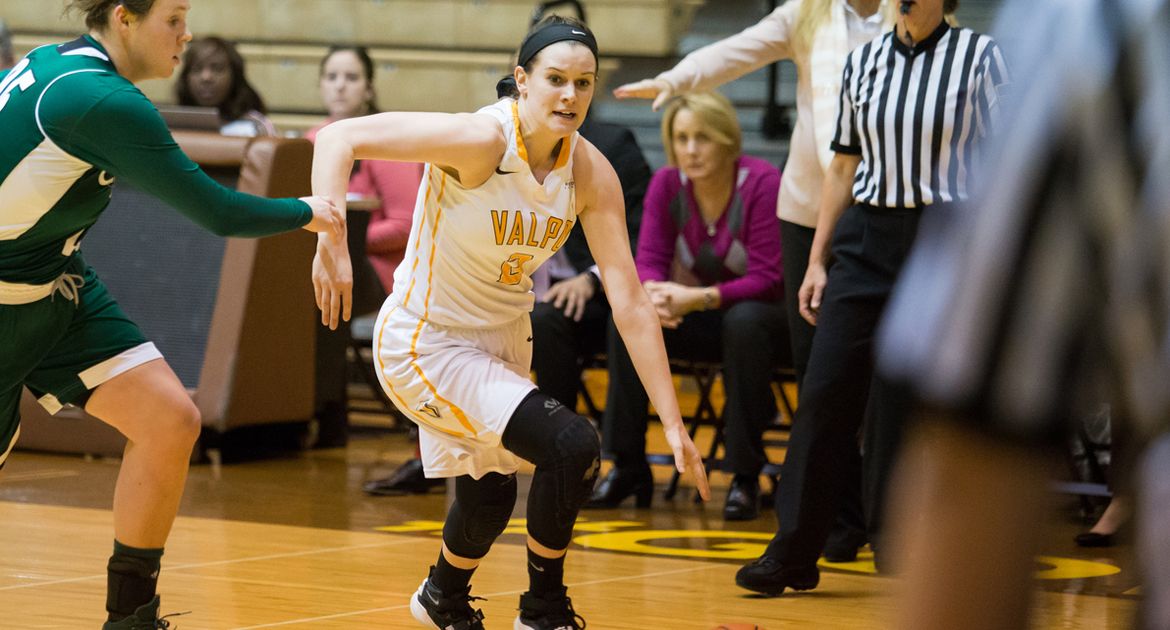 Cleveland State opened a 19-point lead in the first quarter of its women's basketball game versus Valpo before the Crusaders mounted a comeback that cut the margin to one point in the fourth quarter. However, that was as close as the Brown and Gold would get in a 72-65 setback to the Vikings.

Turnovers crippled the Crusaders in the opening quarter. Cleveland State scored 17 points on eight Valpo errors as it ran up a 29-10 lead heading towards the final minute. Imani Scott-Thompson (Akron, Ohio/Firestone [Dakota College at Bottineau]) resuscitated the Brown and Gold by drilling her first of three triples to end a 10-0 CSU run. Ashanti Abshaw powered the Vikings with 11 first-quarter points as the home team led 29-13 after one period.

Valpo cleaned up its act in the second quarter. After knocking down a pair of three-pointers in the first quarter, freshman Meredith Hamlet (McBain, Mich./McBain) nailed a couple more in the second during a 15-2 run that made it a two-possession game. Scott-Thompson entered Monday's contest with four steals on the season. She snagged three before the first half horn blared. Valpo forced ten Viking turnovers in the opening twenty minutes as it clawed its way back to 43-35 at the intermission.

Hamlet led all scorers at the break with 15 points. Valpo shot 6-of-14 from three-point range in the opening half, but trailed 23-5 in the points-off-turnovers department.

The Crusaders made it a four-point tilt on two different occasions in the third quarter. However, the turnover bug came back to bite them both times. Dani Franklin (Cedar Rapids, Iowa/George Washington) splashed her first triple since Feb. 11th during a period that saw the Brown and Gold receive seven points from their bench.

Hamlet rose to the occasion again a couple minutes later with her fifth three-pointer of the night, a trey that drew Valpo to within one at 63-62. Cleveland State responded with five straight points before Scott-Thompson canned a three from the point. Armed with a 67-65 lead, the Vikings received a momentous three-pointer from Khayla Livingston to pad their lead to five points with 1:19 on the clock.

Valpo's solid perimeter shooting hit a wall during the game's denouement. The Crusaders missed their final five three-point attempts to end the game on a 2:36 scoring drought.

Hamlet finished with 19 points thanks to 5-for-13 shooting from downtown. Scott-Thompson finished one off her season high with 13 points. Walker added 11 points and six rebounds.

Lindfors matched a season high with six blocks. With 62, the freshman is already in a tie for eighth-place on Valpo's career blocked shots list. Lindfors needs six more before the end of the season to finish in second place in Crusader history for rejections in a single season.

Valpo accumulated 13 steals on the night, its most since Jan. 23rd, 2014 (18 vs. Detroit). Scott-Thompson led the defensive effort with four steals while seven of the nine Crusaders that played recorded at least one.

Valpo (8-20, 4-13 Horizon) will close out the regular season Saturday at UIC (12-16, 3-14 Horizon). The winner of that game is guaranteed at least a ninth-place finish in the Horizon. Links to the broadcasts and live stats will be available at ValpoAthletics.com.