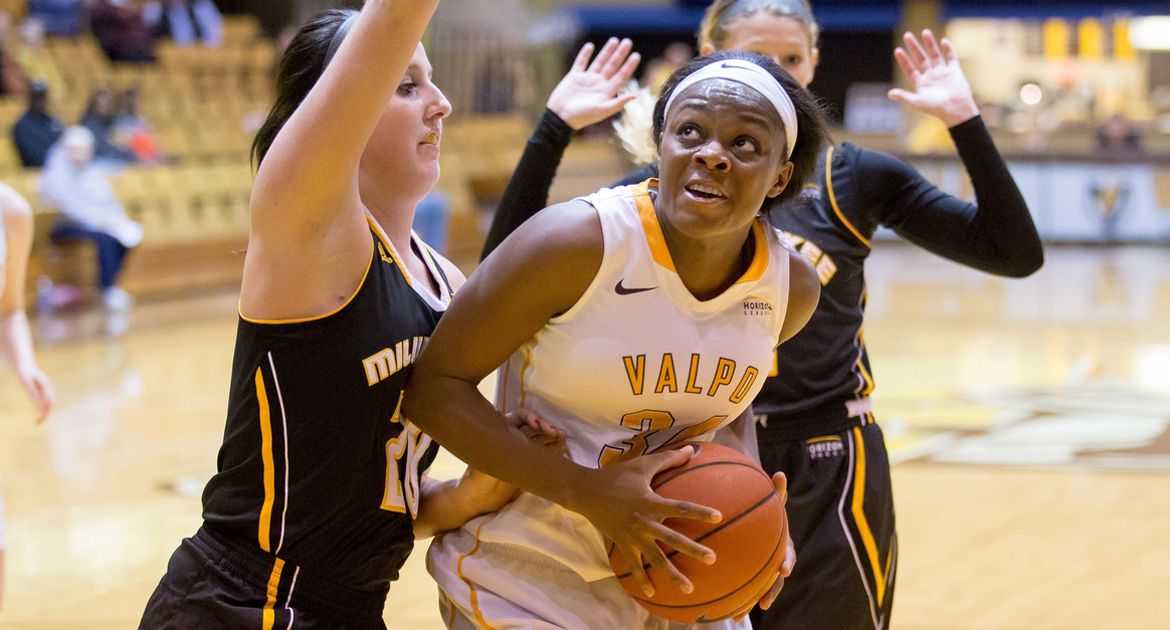 Valpo rode out a seemingly unsustainable pace from three-point range to overtake Detroit, 94-91, in overtime of the Horizon League Women's Basketball Championship opener at Kress Center in Green Bay, Wisconsin on Thursday. The Crusaders shot 15-of-23 (.572) from beyond the arc in the victory, matching their second-highest three-point total in program history.

Though it didn't start out that way, the Crusaders put on a shooting show for the ages. Valpo missed its first three attempts from the floor, but made 18 of its next 24 tries. Meredith Hamlet (McBain, Mich./McBain), Hannah Schaub (Brooklyn Park, Minn./Park Center), Lexi Miller (Caledonia, Mich./Caledonia), Walker, and Abby Dean (Carmel, Ind./Carmel) all canned triples in a wildly-impressive first quarter. In all, the Brown and Gold sank seven of their eight three-point attempts to get out to a 27-17 lead after ten minutes.

The hot shooting didn't abate in the second quarter as Valpo nailed another three treys. Detroit made it a seven-point game three times in the stanza, but the Crusaders scored on the ensuing possession each time. Walker hit from three with just under two minutes to go in the half to push Valpo's lead to a game-high 12 points. However, the Titans scored the final four points of the quarter to bring the contest to a 48-40 score at the intermission.

By the time the half ended, the Crusaders had shot 10-of-13 from beyond the arc, 8-of-14 inside it. Walker led all scorers at the break with 16 points while Hamlet had 11. Schaub was 3-for-3 from deep for nine points. Amber Lindfors (Elk Grove Village, Ill./Elk Grove) had three of her five blocks during the first twenty minutes. Her final rejection moved her into second-place for most blocked shots in a season in program history with 68.

Schaub and the Crusaders emerged from the halftime locker room and quickly proved their shooting wasn't a one-half wonder.

The freshman buried a three-pointer six seconds into the third quarter to keep the fire burning. It was the Crusaders' only three-pointer of the period as they accomplished the vast majority of their damage in the paint. 16 of Valpo's 19 third-quarter points came in the lane. Haleigh Ristovski and Brianne Cohen spearheaded a surge that brought the Titans to within six points.

But as was the theme Thursday, Valpo stepped up when adversity approached.

Dean and Franklin pushed the lead back to double digits with six straight points and the Crusaders entered the fourth quarter with a 69-59 advantage.

Detroit appeared prominently in the Crusaders' rear-view mirror as the game reached the waning minutes. Hamlet squashed an ill-timed 5:41 scoring drought for Valpo with a clutch drive down the left side of the lane. Detroit had trimmed the margin to three during the Brown and Gold's scoring woes before Hamlet's layup made it 75-70 with three minutes remaining in regulation.

The Ristovski sisters brought the game to a 75-75 deadlock heading into the final 110 seconds. Haleigh tossed in a layup after a Rosanna Reynolds offensive board. Lola followed that with a triple for the first tie of the game since 7:40 of the first quarter.

Valpo's only offensive rebound of the day came on its next possession. Franklin squeezed the carom off a Walker missed layup and fed Dean for a putback.

Cohen had a golden opportunity to tie the game with 22 seconds to go, but Lindfors stuffed her under the basket. Trailing by two, Detroit was forced to foul. Walker split her pair of foul shots, giving the Titans a chance to send the game to overtime.

Miller was called for a foul on Haleigh Ristovski's game-tying three-point attempt with 10 seconds on the clock. Ristovski nailed all three free throws to knot it up at 78-78. Hamlet got the ball for Valpo's last possession, but her potential game-winner was blocked by Lola Ristovski.

Like a heavyweight fight, both teams traded big blows in a back-and-forth overtime session that featured six lead changes. It was only appropriate that the Crusaders went 4-for-4 from three-point range to out-score Detroit, 16-13.

Ristovski knocked down her seventh and final triple of the day to open the frame. Hamlet answered right back with a three of her own. Dean raised the nylon from downtown to put Valpo up 84-81 with 3:52 on the clock. After a Reynolds basket on the other end, Hamlet extended the margin to four with a three-pointer from the wing.

Nicole Urbanick answered the call for the Titans as she buried back-to-back treys for Detroit to provide UDM with a two-point lead.

It was Hannah Schaub's turn to step up for the Brown and Gold. She sank her fifth three-pointer to wrestle the lead back Valpo's way. The seesaw continued to swing when Cohen recorded a lay-in that put the Titans ahead by one at the 1:15 mark.

Both teams traded turnovers on their next possessions before Walker came through with a basket down-low that swung the pendulum back towards the Brown and Gold. Dani Franklin (Cedar Rapids, Iowa/George Washington) and Lindfors both split foul shots once Detroit went into foul mode as Valpo led 94-91 with five seconds remaining. Reynolds' last-second three-point attempt flew wide and Valpo held on for its first overtime win since Feb. 2nd, 2013.

Walker finished with 23 points (9-17 FG) and seven boards. Hamlet was 5-for-7 from beyond the arc as part of a 21-point performance. Dean had 16 and Schaub's five triples supplied her with 15.

Lindfors led the defensive effort for Valpo with five blocks and eight rebounds.

Haleigh Ristovski registered a game-high 26 points for Detroit on 7-of-10 shooting from the perimeter. Cohen had 25 points (10-20 FG) off the bench.

Valpo's 65.2% field-goal percentage (15-for-23) was the sixth-highest percentage in a single game in program history. The 15 three-pointers matched the second-most triples ever in a tilt.

The Crusaders survived a 19-12 foul discrepancy. Detroit shot 18-of-21 from the charity stripe while Valpo made just seven of its 11 attempts.

Valpo (10-20) advances to face Northern Kentucky (18-12) in Friday's second round matchup. The Crusaders and Norse split the regular season series. Links to the audio, video, and live stats are available at ValpoAthletics.com.