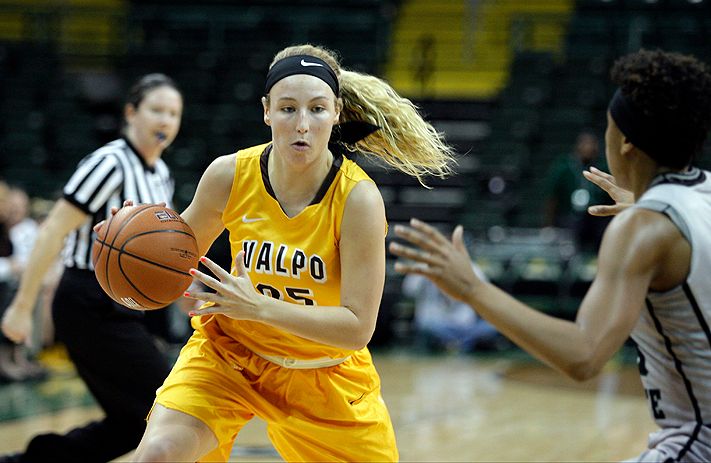 Grace Hales is 21-for-21 at the free throw line in her last 12 games.
Valparaiso at Northern Kentucky | February 11, 2017
Related Links
Related Links

Next Up in Crusader Basketball: The Valparaiso University women’s basketball team will continue this week’s swing trip on Saturday afternoon as the Crusaders clash with the Northern Kentucky Norse. Valpo will attempt to bounce back from Thursday’s loss to first-place Wright State and avenge a 15-point defeat from the first meeting of the year between the two teams.

Last Time Out: The Crusaders fell 63-48 despite holding the Raiders below 30 percent shooting for the second straight meeting. Wright State racked up 23 offensive rebounds and forced 17 turnovers, outscoring the Crusaders on points off turnovers 17-2. Two Crusaders pulled down personal bests in rebounding, as Dani Franklin matched a career high with 16 boards, while Amber Lindfors set a season high and matched a career high with 12 caroms, five of which came on the offensive glass. Franklin also poured in 19 despite being held to two first-half points, notching her seventh double-double of the year and her second straight.

Following the Crusaders: Saturday’s game and every game for the remainder of the season will be available on ESPN3, WatchESPN and the ESPN app. In addition, audio can be heard on 95.1 FM Valparaiso, WVUR with Brandon Vickrey (play-by-play) and Ben Ariano (color commentary) providing the hometown call. Links to live video, audio and stats can be found on ValpoAthletics.com.

Series Notes: Valpo is set to play its second game at BB&T Arena. The last time the Crusaders visited Highland Heights was Northern Kentucky’s first-ever Horizon League game and was the first all-time meeting between the two teams when they squared off on Dec. 30, 2015. In what turned out to be one of Valpo’s most memorable games of the season, the Crusaders escaped with a 61-60 win as a buzzer-beating layup attempt by Rebecca Lyttle was missed. Meredith Hamlet went off for 29 points on 10-of-11 shooting in that game. Northern Kentucky has captured three straight meetings since then, including a first-round Horizon League Tournament triumph a year ago. The two teams faced off at the ARC on Jan. 20 of this season and the Norse came out on top 70-55. Mikayla Terry led Northern Kentucky with 21 points, but it was Dani Franklin who led all scorers with 29. The Crusaders went just 3-of-15 from beyond the arc with Franklin accounting for all three made triples.