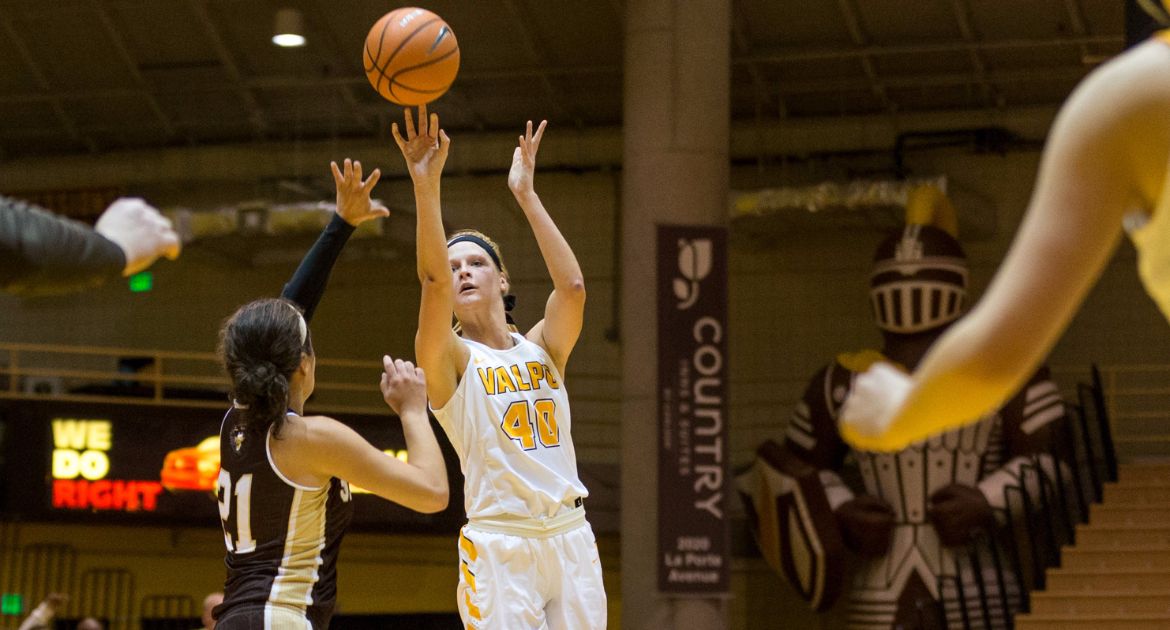 The Valparaiso University women’s basketball team opened exhibition play on Tuesday night in victorious fashion, defeating St. Francis (Ill.) 49-40 at the Athletics-Recreation Center. The Crusaders were led by sophomore Grace Hales (Cromwell, Ind. / Westview), who turned in a double-double of 11 points and 10 rebounds. Valpo withstood the absence of leading scorer Dani Franklin, who was held out with an injury.

Playing Without Franklin: “Playing without Dani Franklin made it interesting because we had a lot of different lineups out on the floor that weren’t used to playing together. We had to make a lot of adjustments. It was good to see what we could and couldn’t do.”

Thoughts on the Game: “We struggled to put the ball in the hole, with the exception of Grace and Caitlin, who both found the basket a lot. We got good looks, we were unable to put it in. When we got frustrated, we started turning the ball over. At the other end of the floor, we did a really nice job and rebounded especially well. I was proud of that effort.”

On St. Francis (Ill.): “You could tell they’ve played two games already and were ready to play another game. They gained some momentum because they knocked down some shots and hung in there and made some plays. They hung around and competed really hard. You could tell they played a few more times than we have.”

On Hales and Morrison: “Both of them rebounded the ball well. Grace pursued the ball hard and knocked down a couple shots. We’re getting the right shots for the right people. They both competed hard and played with a lot more confidence than they did as freshman.”

The Crusaders will open the regular season on Thursday, Nov. 16 at 7 p.m. CT against IU Kokomo at the Athletics-Recreation Center. For those who can’t make it to the game, it will be broadcast on The Valley on ESPN3 with Dave Huseman and Jamie Stangel describing the action. The regular season opener against the Cougars will also be carried on WVUR, 95.1 FM The Source. Links to live video, audio and stats will be available on ValpoAthletics.com.