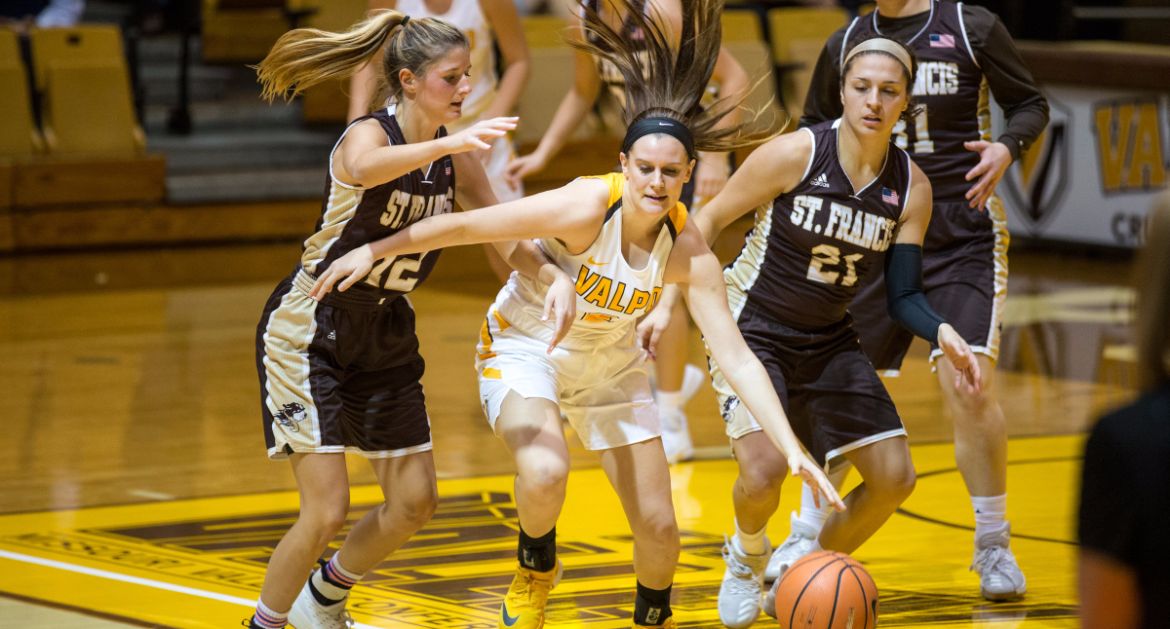 Meredith Hamlet had a season-high 25 points in Sunday's win.
Valparaiso at Longwood | December 03, 2017

The Valparaiso University women’s basketball team went on the road and garnered an 81-68 win over Longwood on Sunday afternoon at Willett Hall in Farmville, Va. Three Crusaders finished in double figures – led by Meredith Hamlet (McBain, Mich. / McBain) with a season-high 25 points – as Valpo fended off two late runs by the Lancers to emerge victorious, a resilient effort less than 24 hours after a loss to Liberty. A day after being limited to 40 points, the Crusaders accumulated 81 on 49 percent shooting.

On Meredith Hamlet & Grinding Out the Win: “We were able to weather the storm in the second half when they came back twice. That’s a sign of a team that wanted to grind it out today. We fought hard to pull back away. A lot of that was due to Meredith Hamlet’s leadership. She took her time, led vocally, recognized mismatches and made plays. She cleared out a side and was able to attack and get layups. I’m really proud of her for making the right plays at the right times.”

On Dani Franklin’s Bounce Back Fourth Quarter:  “At the beginning of the game, Dani struggled to find her shot and was trying to force it. We had a short conversation when she came out of the game and we talked about letting the game come to her. When crunch time came and we needed her, she stopped thinking and just made plays. She fed off the energy that other players provided.”

On the Team Effort: “Everyone played a big role, even those who didn’t play and brought energy on the bench. Ella had a couple blocks, both Bryce and Marlee were difference-makers. They were strong and solid inside and took good shots. Grace continued shooting well in the first half. Caitlin played better and was more consistent today. She defended better and was more disciplined. Longwood hit some tough shots and Caitlin made a considerable impact on the defensive end.”

The Crusaders will conclude a stretch of four consecutive road games on Friday night as they make their way to West Lafayette for a showdown with Big Ten foe Purdue. The game will air on BTN Plus and is slated to tip at 6 p.m. CT. In addition, the hometown radio call can be heard on WVUR, 95.1 FM Valparaiso. Links to live video, audio and stats can be found on ValpoAthletics.com.