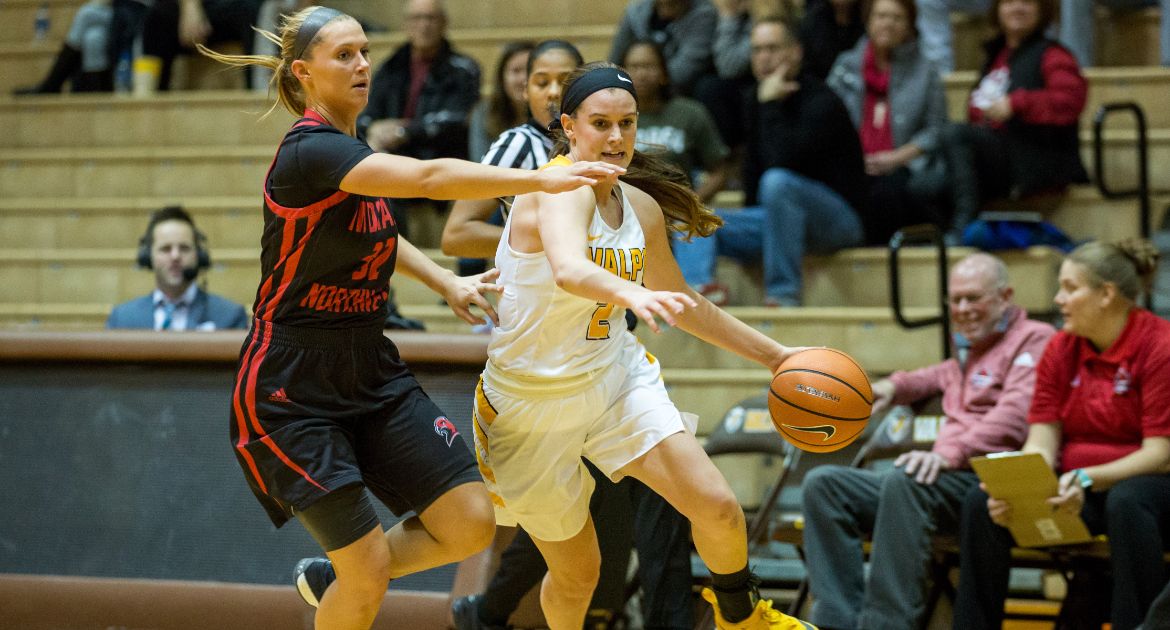 Next Up in Crusader Basketball: The Valparaiso University women’s basketball team will have a chance to nail down its best 10-game start to a season since 2001-02 on Monday afternoon, as the Crusaders hit the road to take on Eastern Illinois in Charleston. A win would also give the Crusaders a three-game winning streak and a 4-1 record in their last five contests.

Last Time Out: Friday was a record-setting night at the Athletics-Recreation Center as sophomore point guard Maya Meredith dished out 16 assists in her first career start to help Valpo to a 99-59 victory over IU Northwest. The 16 assists in a single game shattered Shari Toelke’s program record of 14, which had stood since 1992. Meredith Hamlet equaled a career high with 29 points to lead the Crusaders in scoring.

Following the Crusaders: Monday’s game can be seen on the OVC Digital Network or heard on 95.1 FM Valparaiso with Ben Ariano and Brandon Vickrey providing the hometown call. Links to live video, audio and stats are available on ValpoAthletics.com.

Series Notes: The Crusaders hold a 9-4 edge over the Panthers in an all-time set that goes back to the 1987-88 season. Valpo topped Eastern Illinois 73-68 at the ARC last year, a game in which Dani Franklin went off for 33 points and became just the third player in program history to have at least two careers games with 33 points or more. Hannah Schaub matched a career best with nine assists in the win. Valpo has won five straight head-to-head meetings dating back to 1995, when the Panthers knocked the Crusaders out of the Mid-Continent Conference Tournament. Valpo will visit Eastern Illinois for the first time since Dec. 30, 2010, a 65-58 win.

Dropping Dimes, Breaking Records: Maya Meredith set the bar high with her first start in a Valpo uniform on Friday night against IU Northwest. The sophomore point guard’s 16 assists not only shattered Shari Toelke’s program record that had stood since she dished out 14 on Jan. 15, 1992 against Marquette, but that number also ranks tied for sixth in the history of the Missouri Valley Conference. Meredith become just the 10th player in conference history to register 16 assists or more in a single game. Her 16 assists rank second in the nation this season behind only Syracuse’s Tiana Mangakahia, who had 17 against Vanderbilt on Nov. 24. Meredith’s previous career high was five and her season best was three. In addition, Meredith played a turnover-free game, the first time Valpo’s starting point guard has not committed any turnovers in a game since the season opener against IU Kokomo.

Winning Ways: Valpo has already secured a winning record through nine games for the second consecutive year, the first time the team has done that in back-to-back seasons since 2007-08 and 2008-09. With a win over the Panthers on Monday, the Crusaders would own a winning record through 10 games for the first time since 2001-02, a Valpo team that finished 26-7 overall and 13-1 in conference play, winning the Mid-Continent Conference regular season title and reaching the quarterfinals of the WNIT. A victory on Monday would also give the Crusaders their sixth nonconference victory this season, a total they haven’t reached since 2008-09.

On The Road Again: It’s never easy on the road, but Valpo has a chance to garner its second road win of the year on Monday. The Crusaders went to Farmville, Va. and beat Longwood 81-68 on Dec. 3, putting them in position to win two true road games in nonconference action for the first time since 2006-07, when Valpo won at Akron and Loyola.

Hamlet Hitting Everything: When she’s playing at her highest level, there’s little anyone can do to stop Valpo junior guard Meredith Hamlet. She has had one 29-point performance in each of her three seasons in a Valpo uniform, again hitting that number on Friday night against IU Northwest. Hamlet had 23 before halftime and finished the night 8-of-10 shooting, 5-of-6 from beyond the arc and 8-of-8 at the free-throw line. Since the start of the 2015-16 season, there have been 11 occasions where a Valpo player has hit 5 or more 3-pointers in a game. Hamlet has accounted for seven of those, with Dani Franklin and Hannah Schaub also having a pair of five 3-pointer games apiece.

Four in Double Figures: The Crusaders had four players in double figures on Friday against IU Northwest, the first time this season they’ve done so. One of those was Marlee Profitt, who went 5-of-7 for a career-high 11 points. Freshman Bryce Blood also made her way into double figures for the third time this season, finishing with 10 points. If Blood starts on Monday against Eastern Illinois, it will be the fourth straight year Valpo has had a freshman start each of the first 10 games of the season. She’ll become the fifth Valpo freshman in the last three years to start each of the first 10 games of her career.

Team Tidbits: Valpo shot 59 percent on Friday night against IU Northwest, the team’s best single-game field goal percentage since Feb. 6, 2006 against Centenary. Friday’s shooting clip ranks seventh in program history. The Crusaders totaled 24 assists on Friday, the team’s highest total since Feb. 6, 2006, a 91-44 win over Centenary, a game that also featured 24 assists. No Valpo player committed more than one turnover in Friday’s win. In addition, the Crusaders went 18-of-20 at the free-throw line, the team’s first time shooting 90 percent or better at the stripe since Jan. 28 of last season (93.8 percent at UIC). Free throw shooting has been indicative of the team’s results so far this season, as the Crusaders have won all five games they’ve had a better free throw percentage than their opponent and lost all four games they’ve had a worse free throw percentage than their opponent.