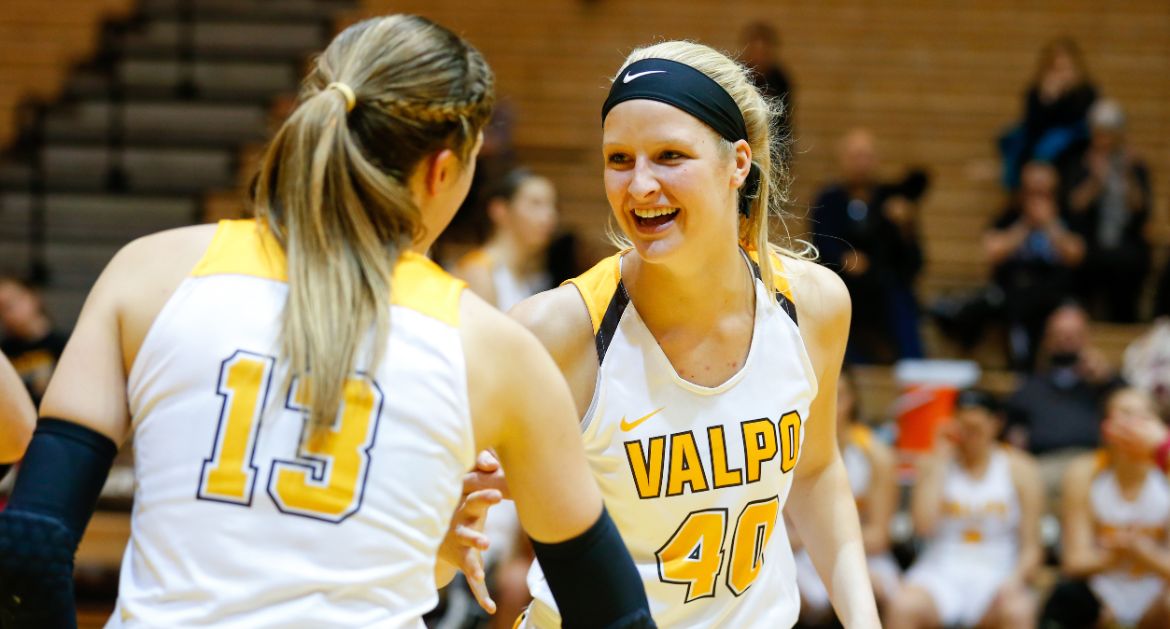 Next Up in Crusader Basketball: The Valparaiso University women’s basketball team will be thrown right into the fire in its first conference contest as a member of the Missouri Valley Conference. The Crusaders hit the road for a weekend swing against a pair of teams that reached the NCAA Tournament a year ago, starting with the defending conference champion Drake Bulldogs on Friday night in Des Moines.

Last Time Out: Valpo’s winning streak reached four thanks to a 68-50 victory over Fort Wayne that closed the nonconference slate on Dec. 21 at the Athletics-Recreation Center. Dani Franklin led Valpo with 19 points, while freshmen Nicole Konieczny (12) and Ella Ellenson (10) also reached double figures. The Crusaders committed just eight turnovers to Fort Wayne’s 21 and held the Mastodons under 30 percent shooting.

Following the Crusaders: Friday’s game will air on The Valley on ESPN3 and the hometown radio call can be heard on 95.1 FM Valparaiso with Ben Ariano and Brandon Vickrey. Links to live video, audio and stats are posted on ValpoAthletics.com. In-game updates will also be available via Twitter by following @ValpoWBB.

Series Notes: It’s been a while since the Crusaders and Bulldogs last opposed one another, as the only all-time meetings happened during the 1994-95 and 1995-96 campaigns. Valpo originally won the most recent matchup 80-79 to open the 1995-96 season, but the game was later ruled a forfeit in Drake’s favor due to Valpo’s use of an ineligible player. Drake prevailed in the only meeting in Iowa between the two teams, a game that took place in December 1994.

Opening an Era: Friday will mark Valpo’s first conference game as a member of the Missouri Valley Conference after the University gained full-fledged conference affiliation on July 1. Valpo was victorious the last time it debuted in a new conference, beating Butler 77-69 on Jan. 5, 2007 at the ARC in the program’s first Horizon League game. The Crusaders will be tested right away, going on the road to play two teams that reached the NCAA Tournament last year to start Valley action.

Home Sweet Home: This weekend’s destination will provide an experience that is simultaneously new and familiar for Valpo senior Dani Franklin. One of the most accomplished players in program history, Franklin will return to a place where she’s played plenty of basketball games in the past – her home state of Iowa – as Valpo matches up with Drake and UNI. While she is entering familiar territory, this will also mark the first time Franklin has played a college game in her home state. She’ll be closest to home on Sunday against UNI, as Cedar Falls is located about 60 miles from Franklin’s hometown of Cedar Rapids. Friday will mark the first time Valpo has played in the state of Iowa since 2001.

Stringing Wins Together: The Crusaders own a four-game winning streak, matching the program’s longest of the last 11 seasons. It’s the team’s second four-game winning streak in the last decade as the Crusaders also won four in a row in 2015-16. A win over Drake would give Valpo five straight for the first time since the 2006-07 season. Valpo, which finished the nonconference portion of the year undefeated at home for the first time since 2007-08, has already nailed down a winning record in December, the team’s first winning month during the regular season since December 2015. At 7-4, Valpo has its best record through 11 games since 2001 and its highest nonconference win total since 2006.

Keeping Control: Valpo has done a strong job of keeping turnovers to a minimum this season. The Crusaders committed just eight turnovers last week against Fort Wayne, matching the previous week’s win over IU Northwest for the fewest turnovers made by Valpo this season. This marked the fewest turnovers the team has made in a game against a Division I opponent since Dec. 12, 2015, when the Crusaders limited the turnover total to six against Miami (Ohio). Valpo has committed 15 turnovers or fewer in eight of its 11 games this season and more than 17 turnovers on just one occasion. Last season, Valpo committed 19 or more turnovers in eight of its 11 nonconference games. The 14.0 turnovers per game is the fewest Valpo has finished the nonconference season with since 2004-05. Here’s a deeper look at Valpo’s improvement in limiting turnovers during this year’s nonconference season as compared to years past.

Withstanding 3-Point Struggles: The 3-point attempts weren’t falling in last week’s game against Fort Wayne, but the Crusaders adapted well, finding other ways to get the job done in a 68-50 win. Valpo went just 2-of-13 (15.4 percent) from beyond the arc after entering that game having shot 32 percent or better from 3-point distance in each of the season’s first 10 games. Valpo had also made five 3s or more in every game this season. The last time Valpo failed to make three 3s in a game was Dec. 19, 2016 against Bradley (2-for-19). The 15.4 percent was Valpo’s lowest from beyond the arc since that game against the Braves, which featured a 3-point percentage of 10.5. Before the game against the Mastodons, the last time Valpo won despite making just two 3-pointers was Dec. 6, 2013 against Chicago State. The 15.4 percent from 3 was also the lowest in a win since that game against the Cougars, when Valpo prevailed 74-50 despite shooting 14.3 percent from 3.

Success at the Stripe: Free throw shooting has been indicative of the team’s results so far this season, as the Crusaders have won all seven games they’ve had a better free throw percentage than their opponent and lost all four games they’ve had a worse free throw percentage than their opponent. Valpo matched a season-high with 26 made free throws last week against Fort Wayne and has shot 85 percent or better at the free-throw line in three consecutive games.