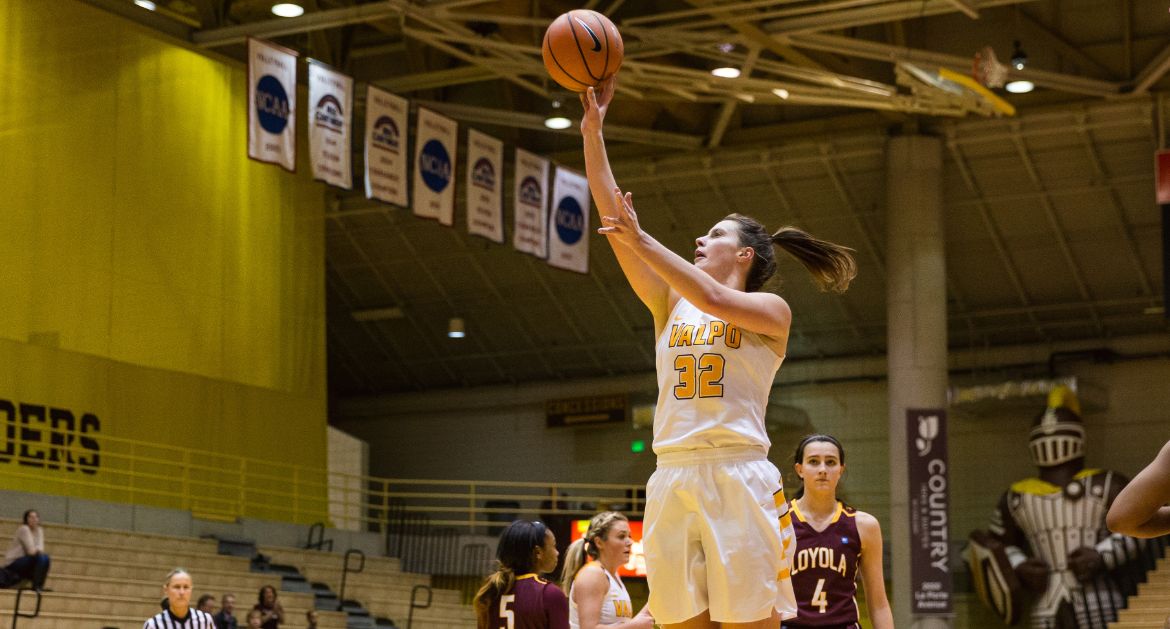 The Valparaiso University women’s basketball team had a season-high five players score in double figures on Friday night at the Athletics-Recreation Center on their way to a 76-60 victory over Loyola. Grace Hales (Cromwell, Ind. / Westview) led the way with 15 points, while Dani Franklin (Cedar Rapids, Iowa / George Washington) poured in 14 to move into second in program history in career scoring and become the second Valpo player to surpass 1,500 points.

On Dani Franklin’s Milestone: “I’m really happy for her and for our program. She’s been a staple here and stuck with it every step of the way. It hasn’t always been easy. She does everything she needs to do to be successful individually and to help our team win.”

On the Difference in the Second Half: “We played with a lot more passion and urgency on the defensive end. In the first half, we seemed a little bit on our heels. In the second half we stepped up, and a lot of that was due to the tone that Dani and Bryce set. We knocked down shots as well. I’m extremely proud of the way we switched ball screens, and our help-side defense was significantly improved in the second half. We also rebounded the ball better, and all of those factors helped lead to the victory.”

On Bryce Blood: “Bryce showed a lot more confidence; she didn’t get down on herself when she did miss a shot. It’s great to see that ability to maintain her composure. She did all of the little things we needed her to do. She always defends, and now she’s playing a lot better on the offensive side.”

On Going Forward: “We have to get healthy and make sure that everyone is doing what they need to do to get their shots up. We are going to put in a few new elements as we prepare for our upcoming opponents.”

The Crusaders will return to action on Friday, Jan. 19 for a showdown with Missouri State. The game is slated to tip at 7 p.m. CT and can be seen on The Valley on ESPN3, heard on 95.1 FM Valparaiso and followed through live stats. Links to all the coverage will be available on ValpoAthletics.com.