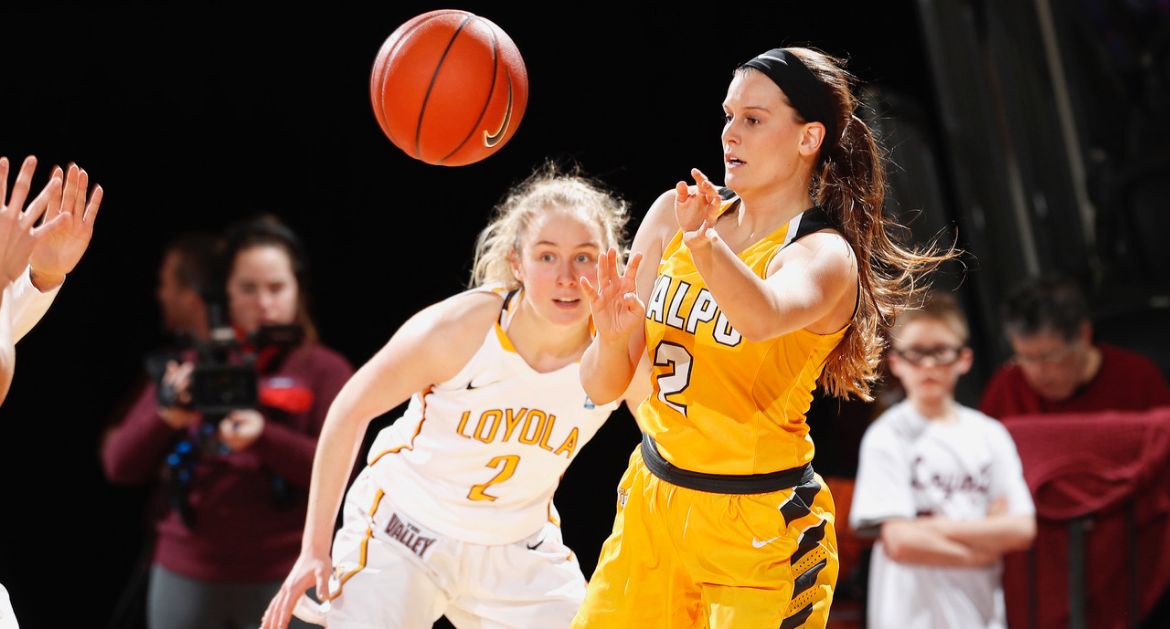 She’s happened before and she’ll happen again, but the Valparaiso University women’s basketball junior guard was feeling it more than ever when her team needed her most in Sunday’s dramatic 63-53 victory over Loyola at Gentile Arena. The Crusaders came from 12 points down to top the host Ramblers behind 19 fourth-quarter points from Hamlet, who was held scoreless for the first three quarters.

On The Comeback: “We came out in the third quarter with a different mindset. Loyola had gained so much momentum that we had a hard time taking them out of what they wanted to do. We outscored them in the third, and even though it was only by one, we felt much more confident. That played a factor in what we were able to do in the fourth.”

On Hamlet: “Meredith just caught fire. Our goal became getting the ball in her hands as many times as possible. She did a great job of being a lot more patient and taking the time to read the floor. She stayed focused after we didn’t start her to begin the second half. It was so good to see her putting the ball in the hole the way she can.”

On the Defensive Effort: “I’m proud of the way we locked in on defense. I’m going to give Dani Franklin a lot of credit for that. She was physical and didn’t allow her shooting to bring her down defensively. She worked hard for positioning and made it difficult for her individual matchup. She did a great job talking when she had to switch off. We had the recognition to know where Abby O’Connor was at all times. We did a good job of taking her away from what she’s comfortable doing.”

On Hales: “She rebounded really well and gave us some second-chance opportunities. She displayed toughness going after balls and was doing more than just shooting. Grace also contributed on defense; she was in the right place and played their personnel the way she was supposed to. She played a strong game today and made a major impact in our win.”

On The Point Guard Play: “It was good to see Maya (Meredith) and Nicole (Konieczny) combine for 18 points and only two turnovers. We need them both to be playing solid for us to win games. They were both strong in different stretches of the game today. Our two underclassmen point guards both settled in as the game went on and handled my criticism well. They bounced back and competed rather than hanging their heads.”

The Crusaders will be back in action on Friday night as they return home to host Southern Illinois. This marks the first of four home games during the second half of the conference season. The game can be seen on The Valley on ESPN3 with Dave Huseman (play-by-play) and Renee’ Turpa (color commentary). Friday is Valpo’s Play4Kay Game with Student-Athlete Advisory Committee members selling pink gear. Proceeds will go to the Kay Yow Cancer Fund.