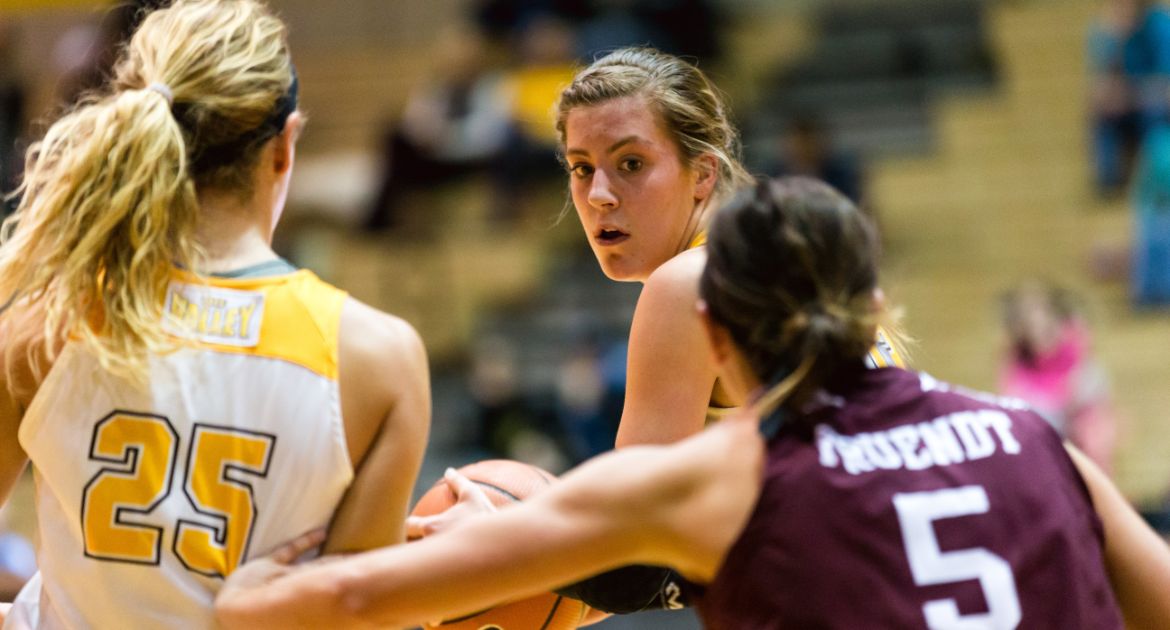 Ella Ellenson had 10 points in 11 minutes off the bench on Sunday.
Missouri State at Valparaiso | February 18, 2018
Related Links
Related Links

The positive outcomes weren’t there, but the Valparaiso University women’s basketball team showed it could play with two of the top teams in the Missouri Valley Conference this weekend. After taking Southern Illinois to double overtime on Friday, Valpo once again narrowly came up short, falling 66-60 to Missouri State on Sunday afternoon at the Athletics-Recreation Center.

Thoughts on the Game: “We’re playing better as a team. In the first three quarters, we took care of the basketball and had numerous shot attempts. We were putting the ball in the hole. We didn’t get as many shot attempts in the second half as we did in the first. We need more possessions; that’s just how we play. I give Missouri State credit; they did a nice job adjusting their defenses and executing down the stretch.”

On Fruendt: “In the first half, we did a tremendous job of knowing where she was at all times. We had our hands up almost all the time. We came out in the second half determined to continue that, but she knocked some down with us right in her face, and then there were some other ones where we weren’t where we needed to be. She put them on her shoulders, but also some of their other kids stepped up and made plays, and they got some timely steals.”

On Rebounding: “I thought we rebounded extremely well. We stepped back and blocked out. We were physical. At their place, the one quarter we weren’t physical, they took it to us. We wanted to make sure we set the tone early, and I’m sure our captains talked about that in the locker room and had a lot to do with that.”

On what needs to happen to start winning the close ones: “We need everybody to step up and play well. Ella had a great game today, and Dani was Dani; she’s always solid. We had a couple kids who didn’t shoot the ball as well as they normally do, and then we had some untimely turnovers. We’re one or two possessions away from winning this game, and unfortunately we didn’t make that happen. We need everybody to play well. When everyone is playing well, we’re going to be really hard to beat.”

The Crusaders will return to the road as they head to Indiana State on Friday night for a game that begins at 6 p.m. CT in Terre Haute. The instate showdown will air on The Valley on ESPN3 as Valpo seeks to avenge its defeat from earlier this season. The game can also be heard on 95.1 FM Valparaiso with Ben Ariano (play-by-play) and Brandon Vickrey (color commentary).