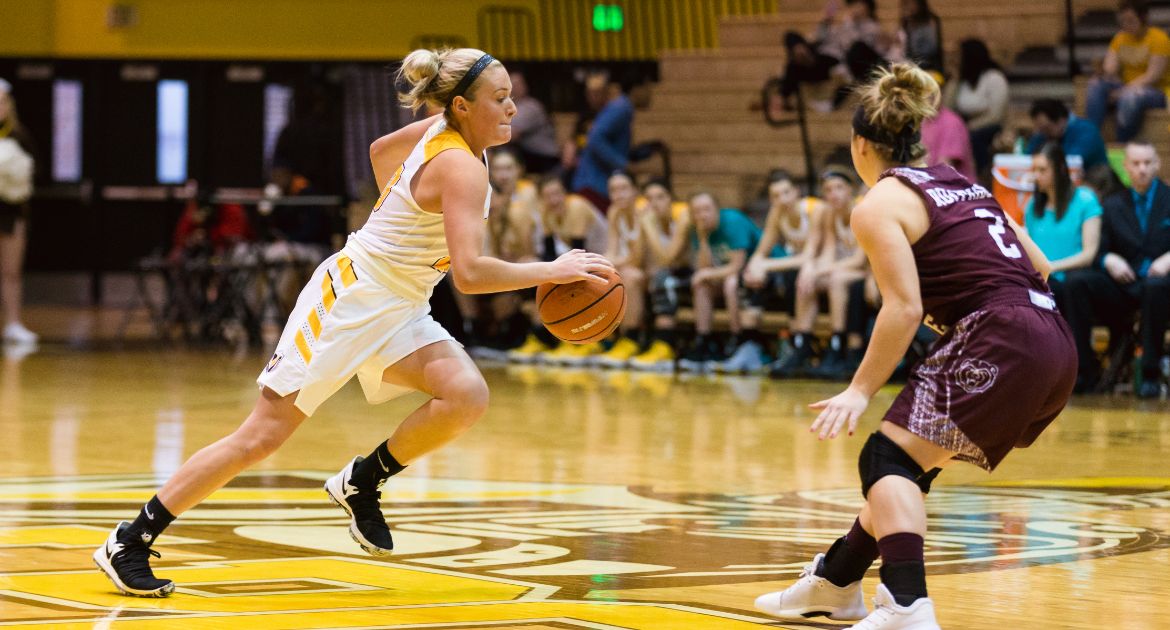 The Valparaiso University women’s basketball team returned to the win column on Sunday afternoon at Meeks Fieldhouse in Evansville, topping the host Purple Aces 67-54 behind a 24-point output from Dani Franklin (Cedar Rapids, Iowa / George Washington). Freshman Ella Ellenson (Rice Lake, Wis. / Rice Lake) was a key contributor off the bench, leading the team in rebounds with a career-high nine.

Thoughts on the Game: “We started the game strong. We didn’t shoot the ball very well in the second quarter and we turned the ball over too many times in the first half, but we stayed focused and didn’t get down on ourselves on the defensive end. I still wasn’t very happy with how we executed and our foul trouble. We talked about that at halftime, and our kids came out really focused in the second half.”

“We rebounded well, got it to Nicole and she attacked hard and found people. We moved it well and got great looks. Dani got looks in the paint. We did a much better job attacking in the third quarter. We knocked down our free throws. We didn’t turn the ball over nearly as much in the second half. Down the stretch in the fourth quarter, we lost some of our focus. That’s unfortunate, but at the same time we’re shorthanded and we’re playing a lot of people out of position. We were able to continue to enjoy playing and finished out the game with a win.”

On Ellenson’s Rebounding: “That’s one thing we can always count on from her. She tracks the ball well and has long arms and good jumping ability. She found a way to get to where the ball was going. She rebounds out of her area and gets it. She hustles and makes plays. We have to get her to understand what she can do when she comes up with the ball. She did a good job today.”

On Defending Noe: “We tried to make it a focal point that we were there on the catch and didn’t give her wide open 3s. She took 13 of her 18 shots from 3. A couple were open, but we had made her rush so much before that that she felt rushed regardless. We did a strong job of knowing where she was. We played a factor in her misses and didn’t give her wide opens looks. We pushed her off the line and made her take shots from deep.”

On Franklin: “She posted up extremely well and made several outstanding moves. When they went zone, it opened up her midrange game. We made some extra passes to get her shots on the base line. She knocked them down. She was moving and in the right spot at the right time.”

Other Thoughts: “Grace didn’t shoot as well as she has been, but she attacked the rim and rebounded far better. Caitlin didn’t play a lot of minutes because she had a few fouls, but she had a couple key steals and played hard. Everybody played their role and played their part. Not everyone has the stat line to show it, but everyone contributed to the win.”

Valpo will return home for the final games of the 2017-18 regular season this week. The Crusaders start senior week by welcoming UNI on Thursday evening at 7 p.m. CT. The game can be seen on The Valley on ESPN3 with Brian Jennings (play-by-play) and Jamie Stangel (color commentary) describing the action. The radio call will be available on 95.1 FM Valparaiso with Danny Dalenberg (play-by-play) and Renee’ Turpa (color commentary). Live stats will also be available.