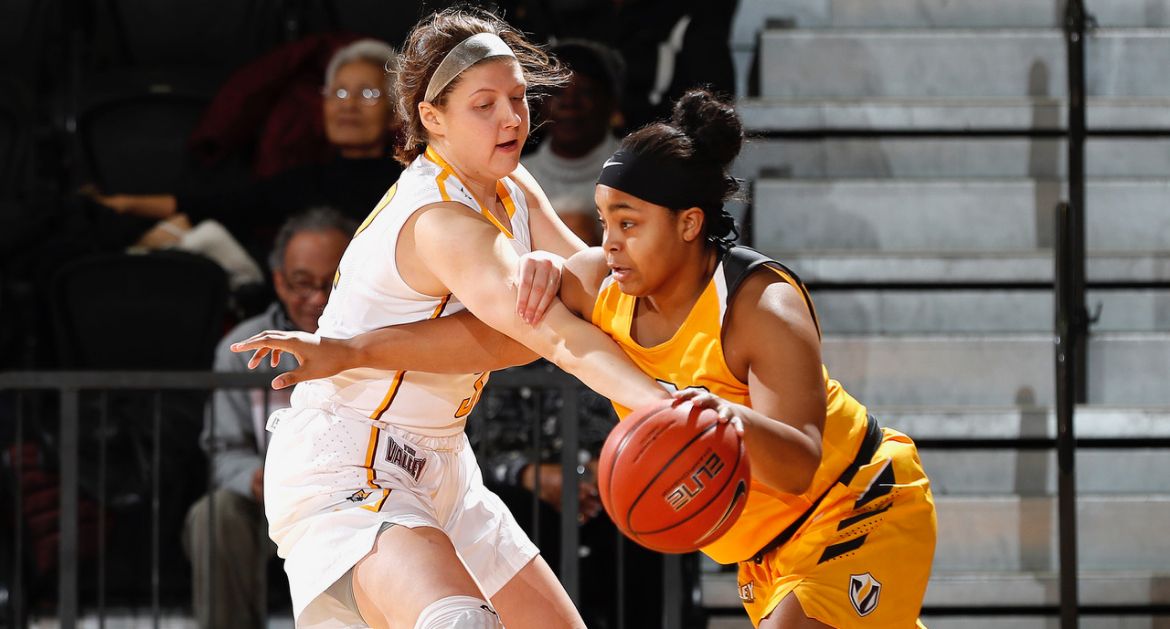 Maya Meredith has made significant progress from her freshman to sophomore season.
UNI at Valparaiso | March 01, 2018
Related Links
Related Links

Next Up in Crusader Basketball: The Valparaiso University women’s basketball team will open the final weekend of the regular season by hosting UNI on Thursday night at the Athletics-Recreation Center. The Crusaders will welcome a pair of Iowa teams to Northwest Indiana this week to round out the home slate. After a road win at Evansville on Sunday, Valpo will look to make it back-to-back wins in conference play for the first time this season.

Last Time Out: The Crusaders secured the sweep of in-state foe Evansville on Sunday afternoon, holding on for a 67-54 win after dominating the third quarter 27-9. Senior Dani Franklin poured in 24 points, while freshman Ella Ellenson chipped in a career-high nine rebounds off the bench. The Crusaders owned a 20-2 edge in points in the paint at one point in the game, and they thrived at the free-throw stripe, going 18-of-20.

Series Notes: The first time these two teams met, the Crusaders trailed by as few as six in the fourth quarter, but eventually fell 77-56 in Cedar Falls in a game that was closer than the final score would indicate. A late barrage of 3s helped the Panthers break the game open. The key factor in the game was rebounding, as UNI pulled down 49 boards, 22 of them coming on the offensive glass. Dani Franklin led the Crusaders with 18 points and eight rebounds, while Maya Meredith also made her way into double figures with 10 points. In that game, the Crusaders and Panthers faced off for the first time as Missouri Valley Conference foes. UNI owns a 3-2 edge in the all-time set. This will mark the first time the Panthers come to Porter County since Nov. 18, 2005, a 62-48 win for the Crusaders.

Tournament Talk: UNI enters this game with a chance to clinch the No. 3 seed for the MVC Tournament, Hoops in the Heartland, which will take place in Moline, Ill. beginning next Thursday, March 8. With a win this weekend over either Valpo or Loyola, UNI will nail down a date with the No. 6 seed on Friday, March 9 at 8:30 p.m. To overtake UNI for third, Southern Illinois needs to win both this weekend, have UNI lose both and win the MVC Strength of Victory Tiebreaker, outlined below. The Crusaders have hope of jumping to the No. 7 seed and earning a first-round date with No. 10 Evansville next week, but they need to win both this weekend and get help. If Valpo falls on Thursday, it will be locked into playing in the opening game of Hoops in the Heartland on Thursday, March 8 at 4 p.m. as either the No. 8 or No. 9 seed.

Tiebreaker Procedures: In the event of a tie in the conference standings, head-to-head will serve as the first tiebreaker. If there is still a tie, power rating using MVC games will be implemented, using the point system outlined below.

Crusaders Can Score: Valpo has taken a significant offensive leap this season as compared to recent years. With two games to go in the regular season, the Crusaders are averaging 67.0 points per game, over five points per game better than a year ago. If Valpo can keep its scoring average above 66.8, this will mark the team’s highest scoring average since the 1999-2000 campaign, when Valpo finished at 68.7. Here’s a year-by-year look at how this year’s scoring average compares to recent seasons.

Rewriting the Record Book: As Dani Franklin gets set to play in her final home game in a Valpo uniform this weekend, it’s fitting to recognize how many places her name will appear in the Crusader program record book when her prolific four-year career is said and done. Franklin will finish in the Top 10 in program history in at least 11 different categories – games played, total points, points per game, field goals made, field goals attempted, free throws made, 3-point field goals made, 3-point field goals attempted, rebounds, free-throw percentage and 3-point percentage. She has a strong chance to reach the Top 10 in two others – free throws attempted and rebounds per game. Here’s a look at where Franklin ranks in program history in various statistical categories entering Thursday.

It doesn’t end there for Franklin, who also has a chance to finish in the Top 10 in several single-season categories for the 2017-18 campaign.

More Milestones: Franklin is 11 rebounds away from becoming the first player in program history to eclipse 1,500 career points and 700 career rebounds. In addition, Franklin needs four more assists to have 100 or more points, rebounds, assists and steals – a career “quadruple triple.”

Hamlet Enters Top 20: Junior Meredith Hamlet has made her way onto the program’s all-time scoring list. She currently ranks 19th in program history with 925 career points. Aimee Litka (2005-09) is 18th at 944. In addition, Hamlet has made 148 career 3-pointers, and moved ahead of Betsy Adams (2008-2012) for eighth in program history last week at Indiana State. Jamie Gutowski (Stangel) is seventh at 151. Gutowski (Stangel), the color commentator for Thursday’s game on ESPN3, started the season in sixth but will likely finish the season in eighth after being passed by both Franklin and Hamlet.

Hamlet Heats Up: Junior guard Meredith Hamlet has led the team in scoring seven times in the last 10 games and she’s reached double figures in eight of those 10 contests. Hamlet is averaging a team-best 15.3 points per game in the last 10 games. In the first 17 games of the year, Hamlet’s scoring average was 10.7.

We Are Young: Although Valpo’s top two scorers are senior Dani Franklin and junior Meredith Hamlet, this is still largely a youthful Crusader squad. Eight of Valpo’s top 10 scorers are freshmen or sophomores and nine of the team’s top 10 scorers are expected to be back next season. Nicole Konieczny, who ranks 16th nationally in free-throw percentage among true freshmen at 78.8, and Bryce Blood are fourth and fifth on the team in scoring, respectively. Freshmen contributing right away has been a theme for the Crusaders, who have two freshmen in their top five in scoring for the fourth straight season.

Eye on the Future: A team that is returning nine of its top 10 scorers will also add two talented freshmen to the mix next year. Ilysse Pitts drained three 3s in the second half on Monday night, helping Montini to a 43-35 win over Bolingbrook in the IHSA Class 4A Lewis Supersectional. Valpo head coach Tracey Dorow was in attendance. Pitts is expected to be a force on the defensive end when she joins the Crusaders. Shay Frederick, a three-star recruit according to ESPN, will begin her state tournament in Wisconsin on Thursday as Hortonville takes on Marshfield. Frederick shattered the Hortonville career scoring record among both boys and girls earlier this season.

Maya Makes Progress: In addition to accounting for two of the most noteworthy achievements by any Crusader this season – making SportsCenter’s Top 10 with a buzzer-beater to tie a game against Southern Illinois on Feb. 16 and shattering a program record with 16 assists against IU Northwest on Dec. 15, Maya Meredith has made many other key contributions for the Crusaders this season. Her statistical progress from her freshman year to sophomore year is impressive.

Single-Season Record Book Watch, 2018 Edition: In addition to Dani Franklin’s aforementioned milestones, there are several other individual and team categories that could gain a new member in the program record book this season.

The Crusaders have made coming from behind quite the trend this season.