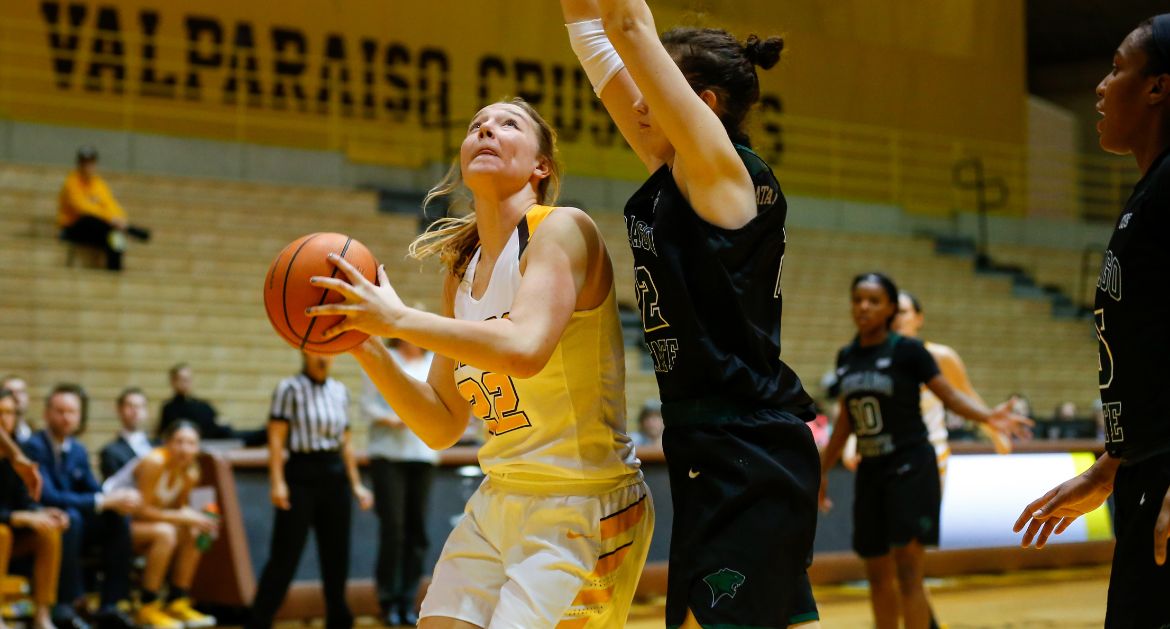 Freshman Bryce Blood (Toledo, Ohio / Whitmer) led the way for the Valparaiso University women’s basketball team on Thursday night at the Athletics-Recreation Center, pacing the squad in both scoring and rebounding in a 76-53 loss to visiting UNI. The Panthers started strong, outscoring the Crusaders 24-9 in the opening quarter before coasting to the victory.

On the First Quarter: “We didn’t get back in transition. We didn’t talk and match up and find their shooters. They shoot the ball extremely well, and once they started to get on a roll, they gained a lot of momentum and a lot of confidence, and we couldn’t take them out of that rhythm.”

On UNI: “They play so well together. They play like a veteran team and they’re used to winning. We couldn’t get them out of their rhythm at all. We tried to zone, man and trap. We had a couple possessions that did go our way, but we couldn’t capitalize on them. We struggled to score and they defend extremely well. They’re super physical and they rebound well. I thought we rebounded better this game than we did the first time, but we didn’t put the ball in the hole the way we needed to in order to beat a good team.”

On Blood: “She rebounded extremely well. She pursued the ball out of her area. She blocked out well and defended well. She is the only player that was able to defend (Megan Maahs). I give UNI credit, they did a good job getting the ball inside. Bryce stepped up and did what she needed to do. Unfortunately, we didn’t do what we needed to do collectively as a team.”

The Valparaiso University women’s basketball team will honor a pair of seniors at Saturday’s regular season finale. Two four-year players who have both served as captains and leaders during their time with the program, Georgi Donchetz and Dani Franklin, will be recognized before they take the court at the Athletics-Recreation Center for the final time. The game against Missouri Valley Conference regular season champion Drake begins at 3 p.m. and can be seen on The Valley on ESPN3, heard on WVUR and followed via live stats.