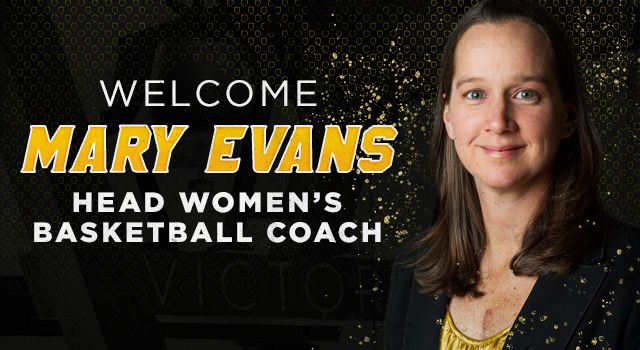 Director of Athletics Mark LaBarbera has announced that Mary Evans has been selected as the next head coach of the Valparaiso University women’s basketball program.

Evans will be formally introduced at a welcome reception on Wednesday, April 18 at 10:30 a.m. in the Athletics-Recreation Center media room.

Evans, who has spent the last five seasons as an assistant coach at Ohio University, becomes the eighth head coach in program history. She brings 15 years of Division I experience with her to Valpo.

“We are excited to welcome Coach Evans to the Valpo Athletics family,” LaBarbera said. “She brings a wide range of experience to our program and understands what championship basketball entails at schools like Valpo. Her passion and energy were evident from our first conversation.”

During her time on Ohio’s staff under head coach Bob Boldon, Evans helped the Bobcats to three seasons of 22 wins or more, three postseason appearances and three Top 75 RPI finishes. The 2014-15 team established a school record with 27 wins, a 21-win improvement from two years earlier and an 18-win improvement from the previous season. The Bobcats won the 2014-15 MAC regular season and tournament titles and reached the NCAA Tournament.

“Through the interview process, I became more and more excited about the opportunity to become the Valpo head coach,” Evans said. “I kept hearing Mark talk about the Valpo experience, and when I started meeting our student-athletes and everyone on campus, I began to understand what he was talking about. I’m thrilled to be a part of that. Valpo’s mission and values align perfectly with my thoughts and philosophy.”

“I’ve had a vast array of experiences that I believe will serve me well in leading Valpo’s program,” Evans said. “I’ve coached at universities that are similar to Valpo, and I’ve worked for a wide variety of coaches. Over the last 10 years, I have defined how I want to run a program. I’ve developed a solid blueprint of what it takes to turn a program around, and I look forward to implementing that at Valpo.”

“All of the coaches I’ve worked with have influenced me and touched me in some way,” Evans said. “My high school coach Teresa Kendle got me excited about teaching and coaching the game of basketball. During my time at Seton Hall, Phyllis Mangina opened my eyes to how much I still needed to learn.”

At Aiken, Evans worked under Mike Brandt, who provided her with the opportunity to run the defense. When she returned to Georgia Southern under Rusty Cram, she was the offensive coach and had the chance to run practices. For the last six seasons she has served on Boldon’s staff, first at Youngstown State and then at Ohio.

“Coach Boldon has hammered home how important it is to have great relationships with your players,” Evans said. “You’re not going to get anything out of them on the basketball court until they know you care about them as people first. On top of being able to work with him to turn Ohio’s program around, my time under Coach Boldon solidified the importance of those relationships.”

“I am extremely honored to be the head coach of the Valparaiso women’s basketball team,” Evans said. “I would like to thank President Mark Heckler and Mark LaBarbera for giving me this opportunity. I am enthusiastic for my family and me to become part of the Valpo community.”

What They’re Saying About Coach Evans

Ohio University Head Coach Bob Boldon: “Mary is a hard worker who will undoubtedly be successful as a head coach. Valpo is fortunate to have someone with her knowledge of the game and passion to improve players both on and off the floor. We will certainly miss her and wish her the best of luck as she takes on this new endeavor, an opportunity that she has been diligently preparing for her whole life.”

Former Seton Hall University Head Coach Phyllis Mangina: “I am thrilled that Mary has been given this well-deserved opportunity. She is an excellent recruiter and coach. She is a tireless worker who truly cares about the development and mentoring of her student athletes. Mary will be a wonderful addition to the Valpo family.”

Stetson University Senior Woman Administrator Alicia Queally: “Valparaiso is a great fit for Mary to begin her head coaching career. I am thrilled for her and her family, and even more excited for the opportunity that is ahead for her and the team. She is an X’s and O’s coach who knows how to teach the game so that her players can get the most out of their basketball experience. She is also a great colleague to have on staff. She is the type of coach that will ensure that her players have a great student-athlete experience that will, in turn, lead to success both on and off the court. I wish her luck and nothing but success in this new chapter.”