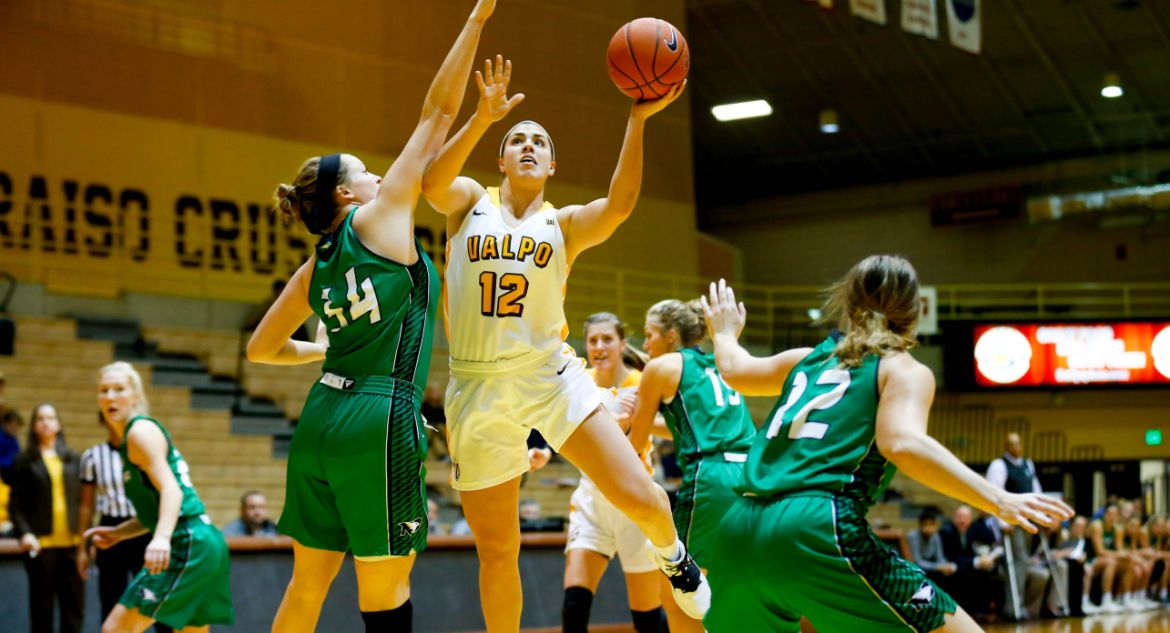 The Valparaiso University women’s basketball team opened up the home portion of the 2018-19 season on Sunday afternoon at the Athletics-Recreation Center with a 62-56 loss to North Dakota in the home debut of head coach Mary Evans. Senior Meredith Hamlet (McBain, Mich. / McBain) scored 12 of her team-high 15 points in the fourth quarter, while Shay Frederick (Greenville, Wis. / Hortonville) reached double figures with 11 points in the first home game of her collegiate career.

“I’m really pleased with our effort. I thought our kids played hard for 40 minutes. I don’t think we necessarily executed well for the full 40 minutes, but our effort was good the entire game. We have to continue to focus on getting better every day and reminding our players of the things they need to do to be successful on the floor.”

“In the first half, we came out with great aggression and got North Dakota into early foul trouble. However, we didn’t play the way we needed to in the third quarter. We are going to talk as a staff to figure out what we can adjust, whether it’s what time we come out of the locker room or how we call plays early in the half. It’s always a challenge because it’s the first time in the game our players are on the other end of the floor defensively and they’re having to talk themselves through some things. We have to continue to work to get better every day.”

On Addison Stoller: “One thing you can count on with Addy is that she’s going to give you 100 percent all the time; it doesn’t matter if it’s practice or a game or a weight-lifting session. She’s a wonderful young lady. She’s been a great leader and she’s gone through a lot. I’m happy she’s back and I think she’s going to have a lot of success this year. She’s a very talented basketball player that hasn’t been able to show that because she’s been hurt for so long.”

Valpo (0-2) will return to the court on Wednesday to visit Big 10 foe Illinois at 7 p.m. CT in Champaign. The game will be broadcast on BTN Plus (subscription required) and 95.1 FM Valparaiso, WVUR. Links to live video, audio and stats are available.