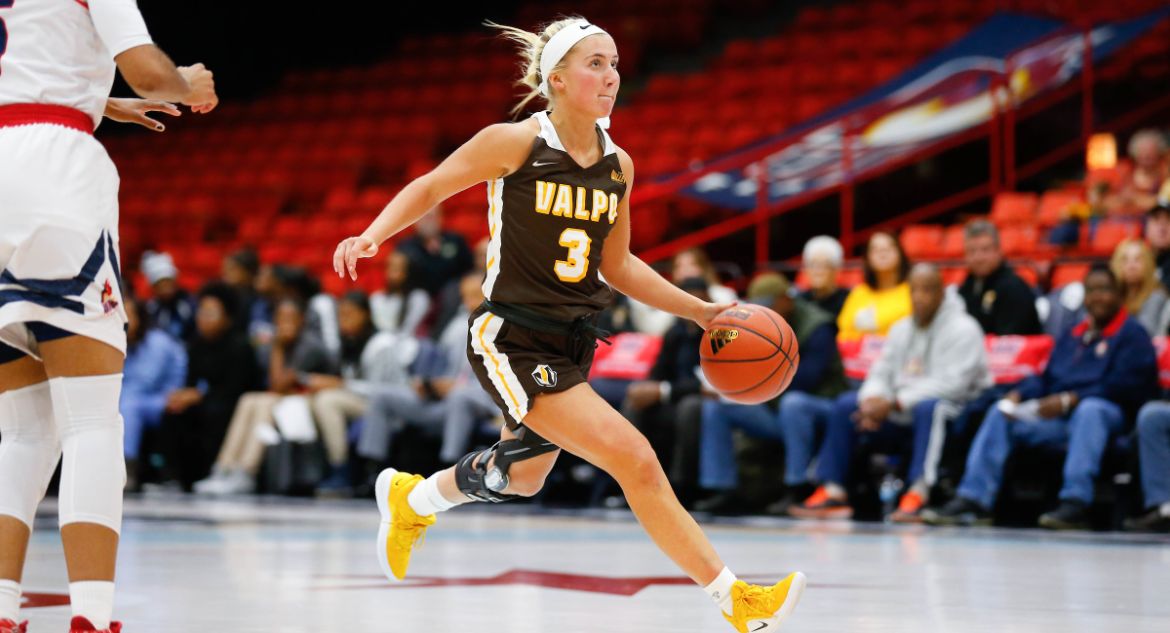 Hannah Schaub had a season-high 11 points on Friday to lead the team in scoring.
Valparaiso at Morehead State | November 16, 2018

Two freshmen reached double figures and redshirt junior Hannah Schaub (Brooklyn Park, Minn. / Park Center) put together her strongest showing of the year as the Valparaiso University women’s basketball team came up just short on Friday night in a 68-62 loss to Morehead State as part of the Vinewood Farm Classic in Morehead, Ky. Valpo stayed very much in the game against a quality Eagles team despite playing with a short-handed squad as only eight players saw action.

“Hannah Schaub is about as hard-nosed as they come. I’m really pleased with where she’s at right now coming off an injury from last year. She wasn’t fully cleared to practice until the fall and had another setback early in the fall. I’m happy with what she’s doing and what she’s understanding despite limited practice time.”

“Ilysse Pitts showed her dynamic ability at the guard position tonight. She made contributions on both the offensive and defensive side of the ball. She was also set back by an injury and was just cleared to play this week. Her game is going to get better and better.”

“Miranda Crockett is a really good basketball player. She’s extremely dynamic. We told our young ladies we were going to have to be OK with the fact that she was going to make some difficult shots because she’s so talented. We did a really good job on Aliyah Jeune, but Crockett hurt us tonight.”

“I love the fight of this team and just wish we could get over the hump. We need to get back to the drawing board to figure out how to make that happen. I’m looking forward to getting back to practice next week so we can work on some things, but I’m really proud of the young ladies’ effort. They responded in the third quarter after we went on a drought. I’m proud of the fight they’ve shown night in and night out. These kids are getting unbelievable game experience through the first two weeks of the season. We have the chance to take these games and learn from them moving forward.”

The road trip will reach its final day on Saturday as Valpo (0-4) battles St. Francis Brooklyn in a game that begins at 6:30 p.m. CT at Morehead State. The game will air on 95.1 FM Valparaiso, on the TuneIn Radio app and online with the link available on ValpoAthletics.com. There will be no video broadcast, but live stats will also be available.