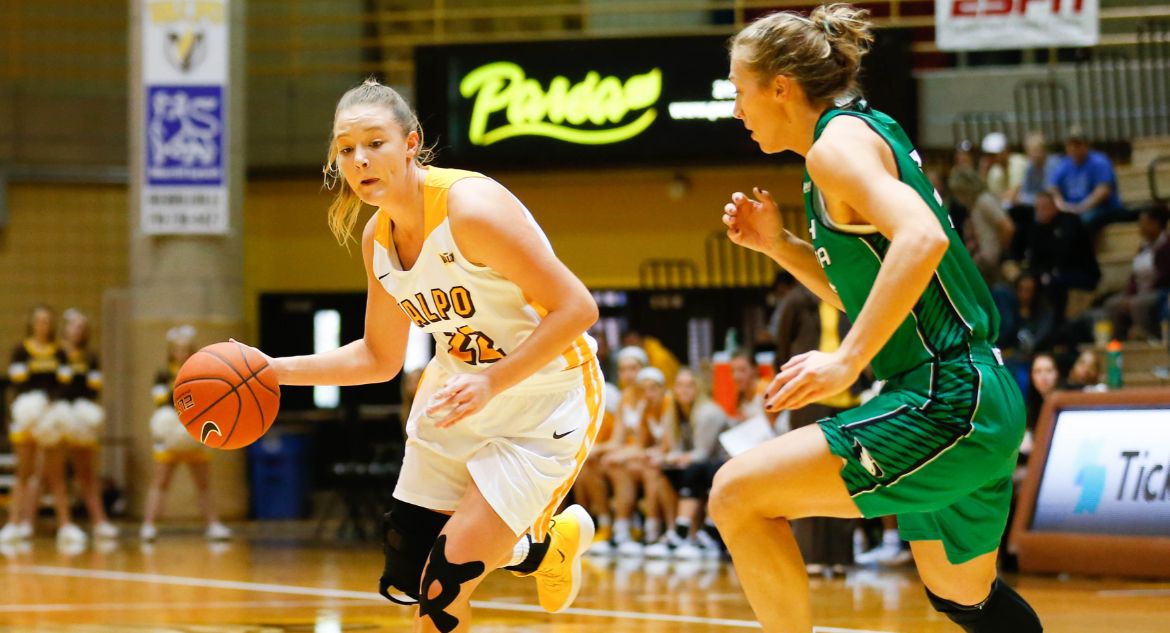 Bryce Blood turned in 11 points on Nov. 17 against St. Francis Brooklyn, her return to the court after missing two games with an injury.
TOLEDO at Valparaiso | November 26, 2018
Related Links
Related Links

Next Up in Valpo Basketball: After an eight-day layoff from game action, the Valparaiso University women’s basketball team will return to the court on Monday to host Toledo at the Athletics-Recreation Center. Valpo will look to make it back-to-back wins for the first time this season. The week away from games was much needed for a Valpo team that had played four games in seven days.

Last Time Out: It was a memorable night in Morehead as both Valpo and St. Francis Brooklyn saw 12-point leads evaporate in a wild game that Valpo eventually held on to win 78-76. Senior Meredith Hamlet joined the 1,000 point club with an 18-point effort, while freshman Shay Frederick scored a team-high 19. The victory, which came as part of the Vinewood Farm Classic hosted by Morehead State, was the first of Mary Evans’ head coaching career. Bryce Blood had 11 points in her return after missing two games due to concussion protocol, while Addison Stoller finished with nine points and eight rebounds.

Following Valpo: Monday’s game can be seen on ESPN+, which is available on a subscription basis for $4.99 per month. Dave Huseman (play-by-play) and Renee’ Turpa (color commentary) will have the call. The game can also be heard on 95.1 FM Valparaiso with Ben Ariano (play-by-play) and Danny Dalenberg (color commentary) describing the action. Links to live video, audio and stats are available on ValpoAthletics.com.

Series Notes: The series history between these two teams consists of just one matchup – a 63-61 Valpo win on Dec. 7, 2013. That victory was part of the Toledo Invite, an event that Valpo won after beating both the hosts and Chicago State.

Hamlet Hits 1,000: Valpo’s 1,000 point club gained a new member on Nov. 17 as senior guard Meredith Hamlet scored 18 points in the team’s 78-76 win over St. Francis Brooklyn to push past the 1,000-point mark for her career. Hamlet became just the 15th player in program history to surpass 1,000 career points. Hamlet’s three-year teammate Dani Franklin was the most recent member of the 1,000 point club prior to Nov. 17. Hamlet is two points away from Carrie Forsman, who is 14th on the program’s all-time scoring list.

Balanced Efforts: Valpo has received scoring contributions from a variety of individuals this season as the team has featured four different leading scorers in the last four games. After Meredith Hamlet let the way with 15 on Nov. 11 vs. North Dakota, Allison Schofield poured in a career-high 16 on Nov. 14 at Illinois. The Vinewood Farm Classic in Morehead, Ky. saw a pair of point guards pace Valpo – redshirt junior Hannah Schaub with 11 on Nov. 16 against the host Eagles and freshman Shay Frederick with 19 on Nov. 17 against St. Francis Brooklyn. The last time Valpo had four different leading scorers in a four-game stretch was Jan. 9-21, 2016 when the leading scorers were Dani Franklin, Jasmyn Walker, Imani Scott-Thompson and Abby Dean. Valpo has already had eight players with at least one double-figure scoring output this season.

Winning A Close One: The 78-76 victory over St. Francis Brooklyn on Nov. 17 was Valpo’s seventh game decided by two points or fewer since the start of the 2015-16 season. Valpo is now 6-1 in games decided by one or two points in that time span and 6-0 in such games that are decided in regulation.

Shay Starting Strong: Freshman Shay Frederick is off to a strong start to her rookie campaign, averaging 10.2 points per game over the first five games of her collegiate career. She becomes just the fourth Valpo freshman since the start of the 2001-02 season to average double figures over the first five games. She joins good company as the other players to achieve that feat were Meredith Hamlet (10.6 ppg, 2015), Dani Franklin (2014, 13.2) and Jamie Gutowski (Stangel) (11.2, 2002).

Swiping It Away: Valpo has compiled 48 steals through the first five games of the season, the most Valpo has had through five games since 2009-10, when it had 59. Twice Valpo has had 13 or more steals in a single game this season, including 15 in the season opener against UIC, Valpo’s most since Jan. 23, 2014. Addison Stoller leads the team in steals with 15.

Blood Facing Hometown Team: Toledo native Bryce Blood will have her first chance to face her hometown team in a college game on Monday at the ARC. Blood considered Toledo out of high school, but thought Valpo was a perfect fit and liked the idea of going to school a little further from home. Blood was an Ohio high school standout during her tenure at Whitmer.