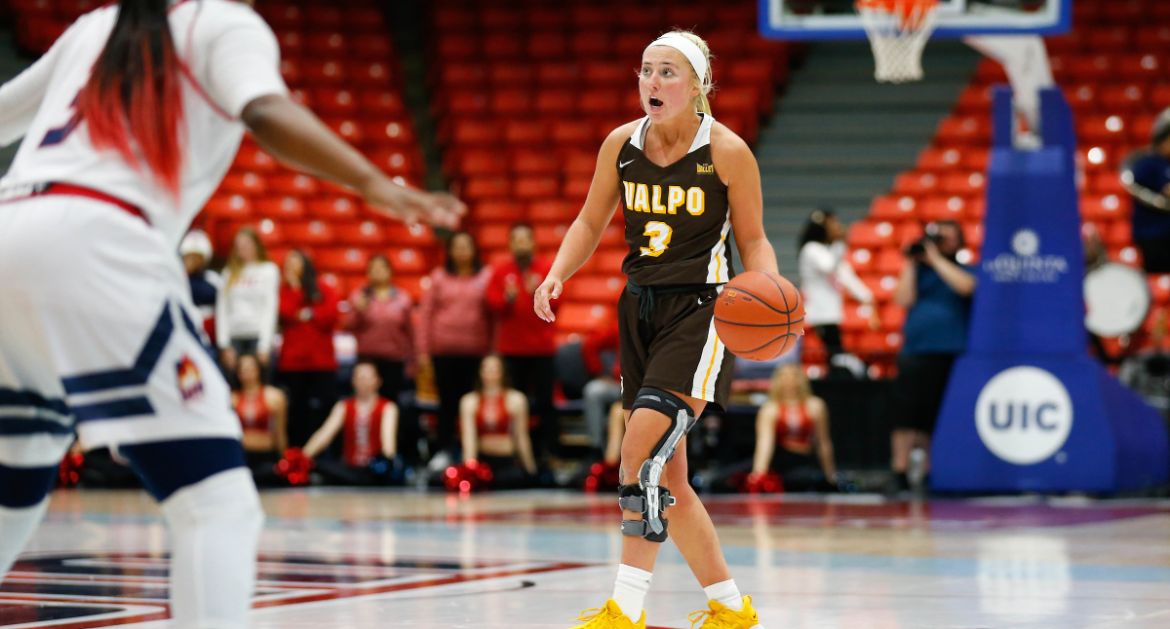 Next Up in Valpo Basketball: The Valparaiso University women’s basketball team will be back home on Friday to welcome Bowling Green in the final regular season nonconference game of the year. This will mark Valpo’s final game action until an exhibition tune-up on Dec. 31 and the last regular season contest until the conference opener on Jan. 6. Valpo will look to build on Wednesday’s win and make it back-to-back victories on Friday.

Last Time Out: Valpo enjoyed a thrilling 68-64 road win on Wednesday at Purdue Fort Wayne. Six players had at least one steal, six had at least one assist and five had four rebounds or more in a balanced effort in all facets. Meredith Hamlet led the team in rebounds (6), three Valpo players had 15 points or more and two (Ella Ellenson and Addison Stoller) achieved career highs in scoring. Grace Hales hit a vital 3-pointer in the final minute with the shot clock on the verge of expiration to bolster a one-point lead to four and alter the complexion of the game’s duration. Valpo went 16-of-18 at the free-throw stripe in the victory over the Mastodons.

Following Valpo: Friday’s game will be broadcast on ESPN3, which is available free of charge with a cable subscription. Dave Huseman (play-by-play) and Renee’ Turpa (color commentary) will have the call. The game can also be heard as always on 95.1 FM Valparaiso with Ben Ariano. For in-game updates, follow @ValpoWBB on Twitter. Links to live video, audio and stats are available on ValpoAthletics.com.

Series Notes: Bowling Green is set to make its way to the ARC for the first time since Nov. 19, 2008, when the hosts bested the Falcons 69-58. This will be Bowling Green’s third visit to Valpo all-time – the first was a high-scoring 127-99 victory for the Falcons on Jan. 5, 1992. Bowling Green leads the all-times series 4-1 after last year’s 90-77 victory in Ohio. Point guards Maya Meredith and Nicole Konieczny combined for 24 points, nine assists and just one turnover in that game.

A Charitable Stripe: After going 11-of-19 (57.9 percent) at the free-thrown line in Sunday’s 51-48 loss to North Dakota State, Valpo reversed its fortunes at the stripe on Wednesday at Purdue Fort Wayne. The team nailed 16 of its 18 attempts for a season-best 88.9 percent. In fact, that marked Valpo’s best free-throw percentage in a game since going 18-of-20 on Feb. 25 of last season at Evansville.

Breakout Performer: Addison Stoller has reached double figures in five straight games, upping her season scoring average to 12.2 to go along with a team-best 7.2 rebounds per game. Stoller averaged 3.3 points per game in 17 appearances a year ago after scoring 3.6 points per game in five games as a sophomore. Her health has improved considerably and with it has come an uptick in playing time. She is playing 28.5 minutes per game after playing 8.4 per game last season.

What a Difference a Year Makes: The team that will face Bowling Green on Friday night will have a much different look than the one that visited the Falcons a year ago. Only 16 of the 77 points scored by Valpo last year at Bowling Green (20.8 percent) were by players who will be active for Friday’s game.

Triple Threat: Addison Stoller and Ella Ellenson both established career bests in scoring on Wednesday at Purdue Fort Wayne with 20 and 15 points respectively. They were joined in double figures by Grace Hales, who finished with 17 points. This marked the first time this season Valpo had three players score 15 points or more. In fact, that hasn’t occurred since Feb. 2, 2017 when Amber Lindfors (22), Dani Franklin (17) and Georgi Donchetz (15) did it against Youngstown State.

Double-Double Achieved: Valpo redshirt sophomore Addison Stoller had come close before. First, there was Nov. 11 vs. North Dakota – nine points, nine rebounds. Then, Nov. 16 at Morehead State – nine points, 10 boards. A day later vs. St. Francis Brooklyn in Morehead? Nine points, eight boards. Then she was as close as ever on Nov. 29 at Chicago State – one rebound shy. Two rebounds shy on Dec. 2 vs. Eastern Illinois. Before Sunday, Stoller had made it quite clear that she’s a threat for a double-double every time she takes the floor. But the one thing she was missing? Well, a double-double. That changed on Sunday vs. North Dakota State, when she racked up 11 points to go along with a team-high 10 rebounds, the first double-double of her collegiate career.

Guarding the Arc: Valpo held North Dakota State to 11.1 percent (2-of-18) from 3-point range on Sunday night. That was already the fourth time this season Valpo held an opponent to two made 3s or fewer (at Illinois, at Morehead State, at Chicago State, vs. North Dakota State). The last time Valpo limited the opponent to two made 3s or fewer four or more times in a season was 2006-2007. Valpo achieved that feat within the first 10 games this year. Making Sunday even more impressive is the fact that the Bison had made three 3s or more in every game this season and narrowly extended their long streak of games with two or more made 3s to 92. The 11.1 percent from 3 for North Dakota State was a season best for the Valpo defense and marked the lowest 3-point field goal percentage by an opponent since Feb. 2 of last season, when Bradley shot 10.5 percent from distance.

Rising the Scoring Ranks: For the third consecutive season, a Valpo player climbing the all-time scoring list is a continuous storyline. After two straight seasons of Dani Franklin moving up the Valpo ranks and eventually finishing second in program history in career points, it's Meredith Hamlet's turn. Hamlet’s career total currently stands at 1,117. She has usurped Tamra Braun (2003-2007) for 11th in program history. The next target is the Top 10 as Aimee Forsman (1988-1992) ranks 10th at 1,195.

3-Point Watch: Meredith Hamlet has made 177 career 3-pointers and recently cracked the Top 5 in program history in that area. She needs six more to draw even with Dani Franklin (2014-2018), who is fourth at 183.