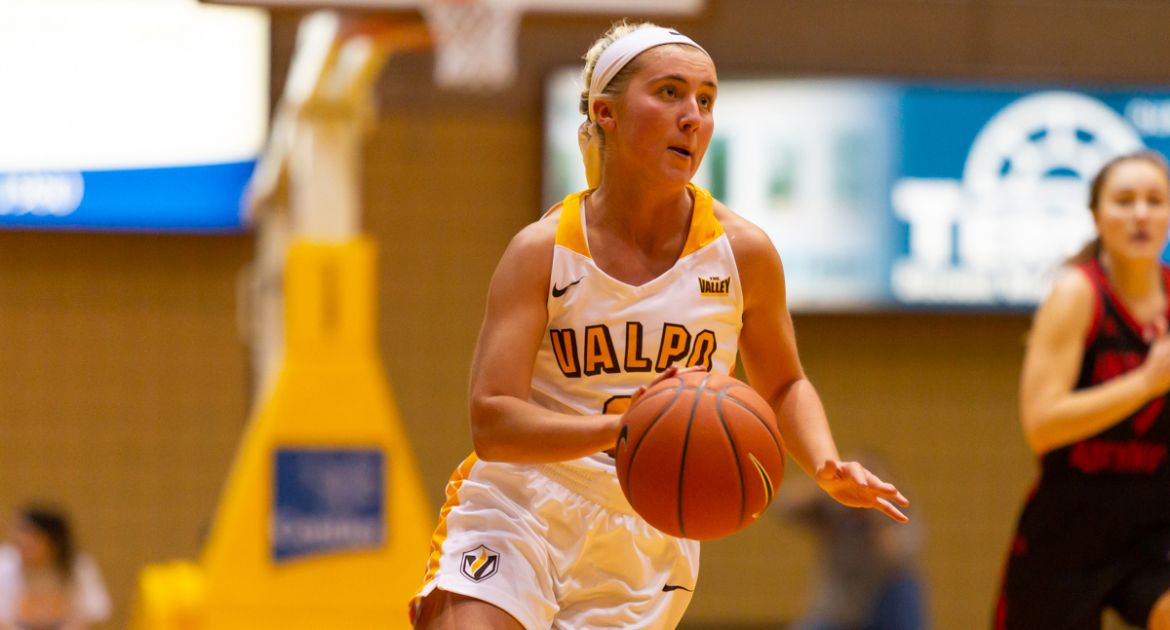 The Valparaiso University women’s basketball team enjoyed an 85-59 victory over IU Northwest on Monday afternoon at the Athletics-Recreation Center, ending the calendar year with a victory in an exhibition tune-up prior to the start of conference play. It was a balanced team effort as 10 players saw action and five scored in double figures.

“After the start of the game, our players increased their level of effort and focus. We talked about it before the game, but sometimes you can talk until you’re blue in the face, but it has to happen for them to understand that IU Northwest was going to come in and give us their best effort. Anything less than 100 percent from us puts us in a bad spot; we have to give full effort every game. It was a good lesson for us to learn that you have to respect the game and play hard no matter the opponent in order to come out with the result you desire.”

“Our players worked well together, leading to the high shooting percentage. They screened well and moved the basketball. We created quality shots and our team is a good shooting team when we get open looks. In the first quarter, we settled for a lot of 3s, and we started getting more aggressive in driving the basketball the rest of the game. Anytime we’re aggressive and drive, we seem to get open layups or better 3s in those situations.”

“Ella is continuing to get better. Her ceiling is unlimited. She said something in practice the other day that got my attention: ‘Wow, that seemed like everything was moving extremely slow.’ I was excited to hear that because a couple months ago, I think the game was spinning like a tornado for her. As the game gets slower and slower for her, she is going to continue to grow into the system and the way we play.”

“It’s so exciting that we’re getting healthier. We’ve been able to practice against each other 5 vs. 5. We haven’t been able to do that in months. It gives you some flexibility if there’s a five that’s not playing well, you can sub five for five and have a conversation with the group that comes off the floor. It gives us a deeper rotation and an ability to hold our players more accountable for errors on the court. That’s going to be really positive for us moving forward.”

“We’re going to approach the conference opener like any other game. We’re going to work hard and continue to get better. Our biggest focus is rebounding and getting better in that area. We’ve discussed it as a staff that rebounding is an area we have to improve on if we want to have success in the Missouri Valley Conference. Rebounding will be huge because Loyola is a strong rebounding team. We need to go out, play hard and do things the Valpo way.”

Valpo will open Missouri Valley Conference play on Sunday at 1 p.m. CT at Loyola in a game that will be broadcast on ESPN3 and 95.1 FM Valparaiso. Links to live video, audio and stats will be available on ValpoAthletics.com.