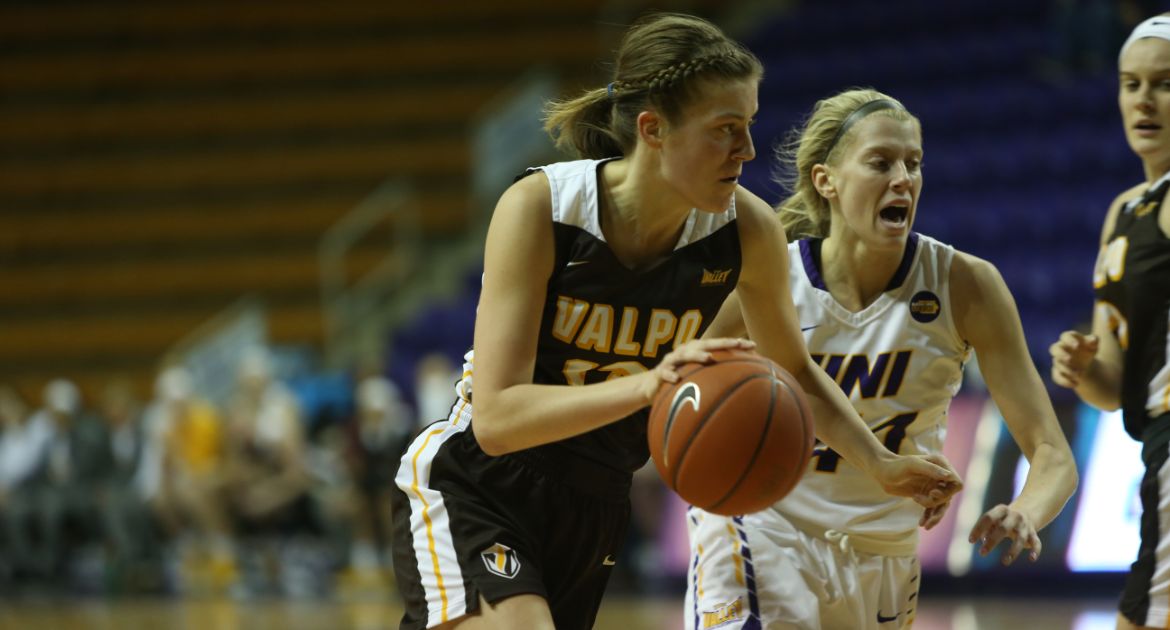 Next Up in Valpo Basketball: The Valparaiso University women’s basketball team will face perhaps its toughest test of the season on Sunday afternoon in Des Moines. Perennial MVC favorite Drake will provide the opposition as Valpo looks to swing a road upset to close this weekend’s Iowa swing.

Last Time Out: Valpo dropped Friday’s game at UNI 71-52 despite leading 23-20 after one quarter and trailing by just two points at halftime. The Panthers went on a 21-0 run in the third quarter that played a pivotal role in the game’s outcome. Valpo was led in scoring by Allison Schofield and Addison Stoller, who had 13 points apiece. Valpo came out of the gates shooting well, hitting at a 61.5 percent clip in the opening quarter.

Following Valpo: Sunday’s game will air on ESPN3, which is available free of charge with a cable subscription. Larry Morgan and Molly Nelson will have the call. The game can also be heard as always on 95.1 FM WVUR (and online via TuneIn) with Ben Ariano (play-by-play) and Brandon Vickrey (color commentary) describing the action. For in-game updates, follow @ValpoWBB on Twitter. Links to live video, audio and stats are available on ValpoAthletics.com.

Back in Action: Allison Schofield played 25 minutes on Friday night, her second game back from an injury that had kept her out from Nov. 17 to Jan. 6. She drained four 3-pointers and shared the team lead with 13 points against UNI. The senior finished three points shy of her career high, which was set in November at Illinois. Schofield knocked down four 3-pointers in a game for the third time in her career and the first time since that contest against the Fighting Illini. Despite missing seven games with an injury, Schofield has played 20 or more minutes on six occasions this season. Last year, she did not play more than 16 minutes in a game.

Lineup Tracker: Valpo has used the starting lineup of Hannah Schaub, Meredith Hamlet, Addison Stoller, Grace Hales and Ella Ellenson in each of the last six games. Stoller, Hamlet and Schaub have been fixtures in the starting five this year for all 14 games. Schaub has started 74 of the 78 games she’s played in a Valpo uniform, while Hamlet has started 103 of her 105 career games. Ellenson has started 11 times this season, while Hales made her ninth consecutive start on Friday after being used almost exclusively off the bench in her first two seasons and through the first five games of this year.

Familiar Face: Valpo freshman Shay Frederick and Drake freshman Maggie Negaard are close friends and former AAU teammates. Negaard played in her seventh game of the season on Friday against Loyola, while Frederick has seen action in all 14 games of her rookie campaign.

Getting it Done from Distance: Valpo has equaled or bettered its opponent in made 3-pointers in 11 of the last 12 games. The only time Valpo made fewer 3s than the opponent in the last 12 games was Jan. 6 at Loyola. On Friday against UNI, Valpo made eight 3s or more for the sixth time this season. Valpo has already matched last year’s season total for number of games equaling or bettering the opposition’s number of made 3s.

Stoller Shines Bright: After an injury-riddled first two seasons in a Valpo uniform, redshirt sophomore Addison Stoller has been a bright spot for Valpo this season. She has scored in double figures in seven of her last eight games and has scored nine points or more in 13 of the team’s 14 games this season. A model of consistency for Valpo, Stoller has also had six rebounds or more on nine occasions and leads the team in rebounding at 6.6 caroms per contest.

Road Warriors: When this Iowa road swing is said and done, Valpo still won’t have played a home game in conference play. This marks the first time Valpo has started a league slate with three straight tilts away from home since 2010-2011, when the team started at Butler before visiting Detroit and Wright State.

Rising the Scoring Ranks: For the third consecutive season, a Valpo player climbing the all-time scoring list is a continuous storyline. After two straight seasons of Dani Franklin moving up the Valpo ranks and eventually finishing second in program history in career points, it's Meredith Hamlet's turn. Hamlet’s career total currently stands at 1,135. She has usurped Tamra Braun (2003-2007) for 11th in program history. The next target is the Top 10 as Aimee Forsman (1988-1992) ranks 10th at 1,195.

3-Point Watch: Meredith Hamlet has made 179 career 3-pointers and recently cracked the Top 5 in program history in that area. She needs four more to draw even with Dani Franklin (2014-2018), who is fourth at 183.